I dream bilingually. The scenes morph from my childhood in the Philippines to my life in America — from my mother’s tropical garden to the summer blooms in my Massachusetts backyard. And in these dream locations, I am speaking two languages: Cebuano, which is my Filipino dialect, and English, which I have taught as a college professor in the United States and overseas. 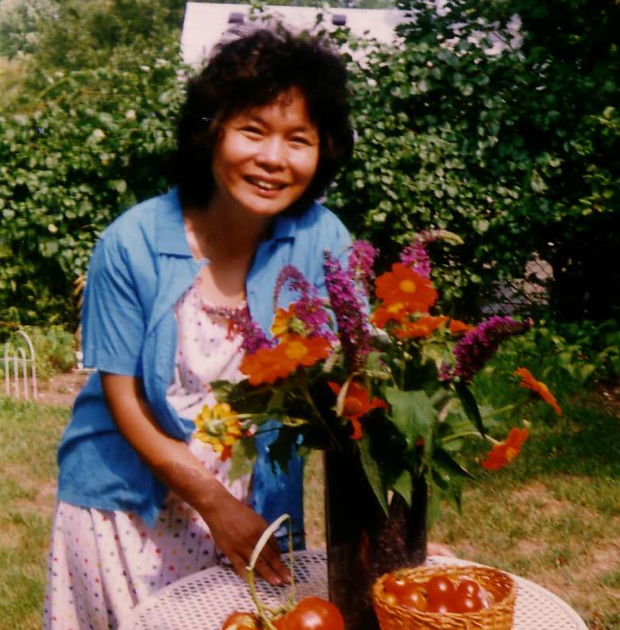 So where is home? This question was made markedly more evident this past winter when my husband and I spent a semester as visiting professors at a Presbyterian university in the Philippines, the same school where I had studied and taught years ago after finishing my graduate work in English and American Literature at Stanford University.

Returning to one’s home country as an older adult and teaching a new generation of students after spending the majority of one’s life elsewhere is a liminal experience. In the six months that I taught a graduate course in British Romanticism and the American Renaissance in the English Department of Silliman University, I often felt suspended between two cultures in the bittersweet attempt to reclaim my original sense of home after all the years of composing a life elsewhere. I am not alone in this. An increasing number of expatriates who have lived in America are returning to their original homes in Asia, Africa, or Latin America permanently or for brief periods of time. In my case, it was for half a year and, as I reflect on that brief sojourn, it was also a parenthetical moment in my journey as a Christian woman in the academy who needed to return to her roots.

Parenthetical. How many times in the life of a multicultural person is there a season when the two cultural strands that define one’s identity converge — as well as diverge? As I write this, exactly two months after traveling from Manila to Seoul, Korea, then arriving in Boston via Chicago’s O’Hare Airport, I remember how both mind and body had to accommodate the psychological and physical distance between my original homeland and adopted home. I also remember the mental bridges I had to build between the years of working in American college campuses and the immediacy of adjusting to teaching in a developing country where English as a language has undergone several metamorphoses. For example, more than once, I felt self-conscious about my Boston accent and my use of elegant rhetoric in teaching British and American literature to graduate students who spoke, to my ears, an unsavory mixture of English and the local dialect. There I was, trying to think “New Englandly” (to use a phrase from Emily Dickinson) while deflecting the idiosyncrasies of an Asian culture that values group-think over solitude and high socialization over individual reflection. I also felt the generation gap, as I concluded that the university where I studied and taught years before had changed dramatically. “Why not?” my husband asked. “So have you.”

Which just about sums up the poignant complexity of returning to one’s beginnings. In T.S. Eliot’s words: “And the end of all our exploring / Will be to arrive where we started / And know the place for the first time.” I was returning to the place my academic career started a few decades ago. Then I was a newly-minted academic fresh from graduate school in the US, bright-eyed and idealistic at a time when college teaching was revered as a vocation, not just a job. In 2011, I longed to reclaim that vision. In the process, I found myself in that liminal space between my mother’s life — spent in one Philippine island with eight children — and that of my daughter Rachel, who travels to Europe for her work. How amazing that in the span of just three generations, our journeys have taken us on three different roads — my mother, who was denied a college education because she was a woman; myself, who had access to higher education because I was born in an era when a woman’s academic potential was valued; and my daughter, who has responded to global opportunities for service through her work in international philanthropy. In my choice to live in two cultures and to find a life in the West, with my Asian background always in the rear-view mirror, I feel I have gained some moorings in both worlds, but also lost some footing. 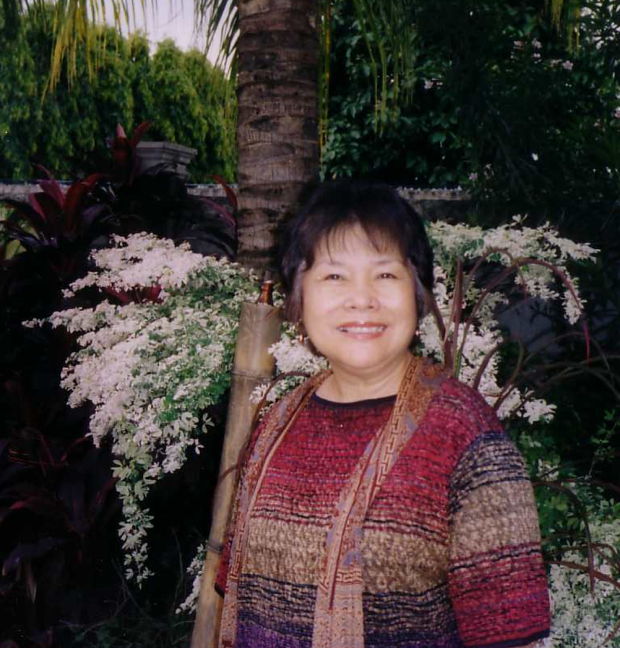 Photo: Priscilla in a Philippine garden.

There is a Filipino folk dance called tinikling (the dance of the rice bird) which involves intricate footing and much daring. The dancer steps in and out of bamboo poles that are struck together to lilting music, requiring a sense of rhythm and an intrepid spirit. This is a metaphor for hopping in and out of two cultures, navigating with grace the promise and peril of what can be a lively, exhilarating experience. It can also be nerve-wracking, if one is out of step or not in sync with the rhythmic beat.

I feel like I have been in this “dance” for a long time now. In my professional life as a teacher, I have “hopped” from teaching purely Euro-American literature to post-colonial works. In my move to develop another career track, I have bravely, if not gingerly, stepped into a new field in international education, which has involved travels to six countries (Thailand, Malaysia, Singapore, Hong Kong, New Zealand, and Australia) where I developed inter-institutional partnerships for cooperative exchanges among universities.

In this multi-faceted journey spanning thousands of miles and many years of adjustments, it was not until I went back to the Philippines recently to teach at my alma mater that I started to understand that the underlying question has always been: “Where is home?” Where am I most myself as I face a classroom of students, American or Filipino? What has been the meaning of my search for a professional identity as a bi-cultural person? What has nourished my Christian faith in all these meanderings?

There was a time when I would try to answer these questions by purchasing a plane ticket or making international phone calls to my extended family and the few friends who are still left in my island home. But as I grow older, the question begs to be answered in a different way. Because the search for home will always be a deep longing for those transplanted from one culture to another — like a tropical plant needing to re-root itself in its native soil while also needing to thrive in another climate — the question becomes more than merely geographical. It is ultimately a spiritual quest.

Even Jesus did not have a permanent address. Born in Bethlehem and raised in Nazareth, he learned to feel at home wherever he was in whatever location his ministry of healing and teaching took him. In the healing of the paralyzed man, as described by Luke, the physician, in the New Testament, Jesus tells the man who has been restored to health: “Go home.” Jesus, who did not have a place of his own, knew the value of home as a place of belonging, of security, of safety.

Living at a time when mobility is part of our modern day experience, a Christian believer like me is reminded that I am part of a “third culture” people. Neither fully American nor fully Filipino, I am a hybrid with many roots. Even my name — Priscilla Lasmarias Kelso — reflects the various combinations of East and West in my family tree. Instead of constantly wrestling with this polyglot identity, I am increasingly learning to celebrate it, to relax into its ambiguities, and to believe that God places us in certain locations where we can live out our calling. Whether in Asia or North America, or elsewhere, my vocation as a teacher is my gift to the world. I am finally becoming more and more open to this truth.

From hymns that allude to heaven as our home to the Psalms that speak of “the Most High as our dwelling place,” we see the human longing for a sacred place of refuge and restoration — a glimpse of the homecoming symbolized by God’s outstretched arms of welcome for us at journey’s end, with ointments and bandages for our weary feet and a place prepared at the table.

After many years asking the question “Where is home?”, I am gradually coming to a time when my longing for a permanent address is being replaced by the growing certainty of God’s gracious and transforming presence wherever I am. Somewhere between the two realities of my Philippine heritage and my adopted country, I am called to live — in the now and the not yet — until my journey takes me to the Promised Land, a destination of no more wandering or wondering.

Will I still be dreaming bilingually by then? Perhaps not.

From one of the central islands in the Philippines to the academic world of Boston, Priscilla Lasmarias Kelso has worked with international education after years of teaching American literature in the U.S. and overseas. She did her graduate work on Nathaniel Hawthorne at Stanford University and has worked at the University of Pennsylvania, Northeastern University , Sonoma State University, and Silliman University, a Presbyterian school in the Philippines. Recently retired with her husband, Bart, she is committed to providing educational opportunities for young women in the developing world. The Kelsos have a grown daughter, Rachel, who works with global philanthropy. Priscilla served on the board of InterVarsity Christian Fellowship for ten years.