They were the first to visit the cemetery on the other side of the crucifixion. What they discovered — rather, what they did not discover — forever changed human history.

Each Gospel writer reports that it was women who’d come early in the morning three days after Jesus Christ had died, giving them the extraordinary identity of first witnesses of the empty grave.

Who were they? In chapter 23:55 Luke identifies them as those “who had come with Jesus from Galilee.” They “followed Joseph [of Arimathea] and saw the tomb and how his body was laid in it.” Once they received their mission from the angel, Luke specifically identifies them (in 24:10) as, “It was Mary Magdalene, Joanna, Mary the mother of James, and the others with them who told this to the apostles.”

These women had been traveling with Jesus, supporting him from their own expense accounts, an unparalleled fact of ancient history. To have had women in this patriarchal society not only devoted to a religious leader but traveling with him would have surely appeared scandalous. In this culture after all, women were second-class citizens, relegated to the fringes of society. They were considered inferior and unteachable, to the point that most rabbis refused to offer spiritual lessons to them. Women were not even allowed to offer testimony during a court of law because their word was considered meaningless.

So it is no small thing that all of the Gospel writers place women first at the tomb.

But why were women the first witnesses in a dark cemetery of the most astounding event any culture or religion ever experienced? Isn’t their mere presence highly problematic given the male-dominated culture in which they lived? If the early church had wanted to start a revolution, wouldn’t they have chosen Peter or James or anyone but women to investigate and tell the news of their missing rabbi?

And if the Gospel accounts of the Resurrection were fiction, any literary critic would deem them unbelievable for exactly this reason. Why put the most important message of the plot, the major turning point of the story, in the hands of very minor characters?

Because it was not fiction. 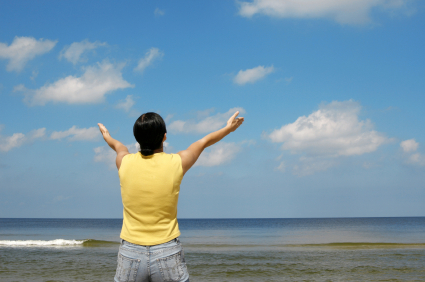 Here, in fact, were faithful women, utterly despairing, arriving at the tomb with no expectation of anything but death. Then they’re confronted with armed guards. How would they get inside to prepare the body? What emotions they must have confronted as they looked from the guards’ bulking muscles to their baskets of spices.

But before they had time to think much, they experienced a violent earthquake. The guards froze like dead men. The women trembled. And two angels appeared, dazzling and glorious and big. They took a seat on top of the rock, and these Jewish women, unlike their male counterparts in biblical literature who would have fallen prostrate at such a visitation, stood there shaking. Luke says they bowed their faces.

Surprisingly, the words were gentle and knowing, and the women did a remarkable thing: they listened:

“Do not be afraid, for I know that you are looking for Jesus, who was crucified. He is not here; he has risen, just as he said. Come and see the place where he lay. Then go quickly and tell his disciples: ‘He has risen from the dead and is going ahead of you into Galilee. There you will see him.’ Now I have told you.” Matthew 28:5-7

As if the stakes weren’t already high — their Messiah murdered, guards nearby, an earthquake and two massive heavenly creatures above them — now they were being entrusted with the message that the man for whom they had come to bury was not here?! He was alive?! Go, the angel said to the trembling, wide-eyed, second-class females, go and give those scaredy-cat brothers of yours this preposterous message, that someone who was dead is not dead any longer?!

No wonder they ran — a good quick pace — afraid and yet filled with joy. What on earth would the disciples think when these women appeared, sweaty, hysterical, and wild?

I suspect if they’d not been scared out of their wits they might have thought better about showing up where the fishermen were hiding. Or at least they would have cooked up a plan about the empty grave. Instead, they just ran. Wildly.

Until Jesus appeared. Suddenly. He met them with a simple, “Greetings” (Matthew 28:9). There they confronted the walking dead-alive man, touched his feet and worshiped him. They recognized his authority. They heard his voice. They experienced his compassion.

They knew that what the creature had said was true: Jesus — whom they’d watched die — was somehow alive.
These heart-broken women, astounded with the first glimpses of the Resurrected Son of God, offer us much for the relative times in which we live. First, they approached the tomb as disillusioned, marginalized second-class citizens; they left fearful yet exuberant messengers with a purpose. They thought they were going to fulfill an age-old burial ritual, and instead received a brand new mission. They confronted the reality of God’s presence, were startled by the comfort he offered for their despair, and were immediately sent to tell others that it was as he said it would be. They encountered both an angel and a living Jesus, and in the process an entirely new reality.

When the angel told them to go, the women turned to run. They’d been willing to tell their friends what the angel had said: Christ has Risen. But all they’d seen at that point was a big rock moved to reveal a vacant tomb. Nonetheless, they took off with the news. Who knows how the disciples would have responded to their report? Would they have thought the women delusional? Maybe someone had stolen the body. Or maybe they would have interpreted the news this way: Jesus — who was dead — was now in the other world. He had already risen into heaven.

Could any of them have expected to see him face to face?

Once they encountered the dead-alive Jesus with their own eyes, touched his feet and heard his words, they were changed for good. Their world was no longer dark with terror; it was alive with the light of hope. They didn’t just have a message to share with their friends; they had a person to introduce to them. Alive from the dead. Victorious over decay. Eternal over mortality.

He was the Person of Eternity. Now in the flesh. Not an idea or a theology or even a new moral order. But a person with moving bones and skin, and a voice that rang gently in their ears. Because he was a new person before them — dead but now alive — they could be too.

This Resurrected Jesus visited a handful of desperate women 2,000 years ago at a garden where corpses decayed. Why? To show them his eternal reality, and then to send them off together with a new identity and purpose. He did the same with his disciples, who in turn, told the early church members, who then told others throughout the world until the news reached even those of us reading this now. And that made a difference for eternity.

“Unlikely Witnesses” is excerpted from Jo’s book, A Desperate Faith: Lessons on Hope from the Resurrection (Baker Books: 2010). It is available from a large bookseller or support your local independent bookstore by ordering Jo’s books through them.

Jo Kadlecek is a former waitress, soccer coach, and camp counselor who’s always loved a good story. She has written hundreds of articles as well as two memoirs, four novels, three books of non-fiction and three Bible studies. She’s the senior writer at Gordon College, on the communication arts faculty there, and a frequent retreat speaker. Find out more at http://www.lamppostmedia.net/