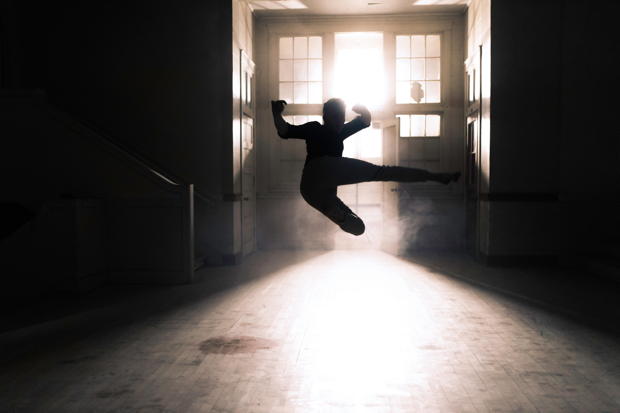 But Ruth said,
“Do not press me to leave you
or to turn back from following you!
Where you go, I will go;
where you lodge, I will lodge;
Your people shall be my people,
and your God my God.
Where you die, I will die —
there I will be buried.
May the LORD do thus and so to me,
and more as well,
if even death parts me from you!”

Now that you’ve read Ruth 1:16-17, watch “Ruth’s Promise,” Kaya’s interpretation of the text through dance, before reading her reflection.

Go. Lodge. People. God. Die. These are the words Ruth repeats to give her vow to Naomi its poetic cadence, so I took these words as my starting point to choreograph a dance from the text. These movements form a phrase, and that phrase is repeated in three iterations that change based on which part of the performance space — my bedroom — I occupy. The choreographic process begins with movement interpreting text, and when the piece is finished, movement and text are in mutually interpreting dialogue, together engaging the music that I paired with the movement. I selected the song, “Lucy’s Tale” by Sarah Sparks, because the lyrics, “don’t belong,” “no place to call my own,” and, most notably, “a story of redemption,” echo ideas from the Ruth narrative.

The movement I created for “go” is simply walking, and it takes it’s pattern — three quick steps followed by two slow —  from the rhythm of the music. The quick/slow split and the confines of my space led me to make it three steps forward, two steps back. Layering this sequence back onto the text, it expresses the conflicting forces that draw these poetic lines from Ruth’s mouth. Pushing her back to Moab are Naomi’s insistence (Ruth 1:8, 15) and perhaps a ring of truth in Naomi’s suggestion that to go is to take on the unknown, while to stay is to remain safe in the realm of the familiar. Yet pulling Ruth forward is her commitment of loyal-kindness to Naomi (Ruth 1:8) — the familial — and that pull proves stronger than the push, resulting in a net-forward movement.

“Lodge” is expressed by a shape with a wide, sturdy stance of the feet and stacked wrists to form a strong roof overhead. By vowing to lodge where Naomi will lodge, Ruth expresses her trust in Naomi to lead her to safe places — or at least a trust that staying with Naomi is worth the risk incurred by leaving the safety of her home in Moab. My movement for “people” began as a gesture of linking arms, but as I rehearsed, it transformed organically into rocking a baby. This made me think of the ending to Ruth’s story, when she gives birth to a child whom the people of Bethlehem call Naomi’s “redeemer” (Ruth 4:14). The son’s birth is the narrative climax, yet the daughter-in-law who bore him “is better to [Naomi] than seven sons” (Ruth 4:15). In a single moment, the narrative celebrates both Ruth’s loyal-kindness — her voluntary commitment of love to Naomi — and the generation of new life as elements of redemption, or restoration of one’s place in the family and the community. Returning to the idea of forward movement out of the familiar into the familial, this maternal gesture and it’s placement following “lodge” points to participation in community as a better kind of security than remaining alone in the confines of the known.

While most of the other movements are grounded and heavy, the movement representing “God” is oddly buoyant. The jumps and wrist-flicks feel out-of-place in my cramped bedroom, and the turn is difficult to execute without colliding with furniture. The “God” movement begs for a more expansive set, and in this way it adds to the impetus of “go” to move beyond the boundaries of the room. Reading Ruth 1:16-17, I notice that Ruth makes her vow to Naomi in the name of YHWH, submitting to the wrath of Israel’s God if she does not keep her word to remain with Naomi. Ruth acknowledges YHWH as the true God, and this is part of what draws her into a committed relationship with Naomi and away from her homeland of Moab. The “God” movement, in its dissonance with the space, brings us to the idea that we can access knowledge of God from any present situation, yet it invites us beyond the boundaries of our current understanding into something more.

The movement for “die” and its development through the three iterations of the phrase may be the clearest way to trace the arc of the entire three-minute piece. The gesture feels like wrapping my body up in itself. The first time, there is very little resistance, and the movement resolves with my collapsing onto the bed. The second time, the movement seems to fight against itself, determined not to let “die” be the end of the dance. Once my upper body is constrained, my lower body takes over the effort of motion. This takes me to the floor, but this time my muscles are tense and I lie flat, ready to move again and push away from the walls and floor that confine me. The third time, the “die” movement is not repeated; I walk out the door instead. Even though “die” is the end of the phrase as choreographed, the dance as a whole moves away from death — much in the way that Ruth’s vow ends by speaking of death, yet the narrative concludes not with death but with new life.

The main theological idea from the text that this dance highlights is the way that Ruth’s almost naive trust compels her to act out of loyal-kindness toward Naomi rather than out of the impulse toward self-preservation that characterizes Naomi’s speech to her leading up to this narrative moment. Naomi is not necessarily wrong in her assessment that Ruth has a more certain possibility of security if she stays home with her family of origin, but Ruth recognizes the potential for greater good in continuing her relationship with her mother-in-law. The present situation may be known, but it is bitter. Ruth takes a risk in following Naomi to Bethlehem, but it is an act of faith based on the hope that looking out for the interests of others yields life more abundantly than settling within the limitations of self-interest.

Photo by Andrew Branch from StockSnap.

Kaya is an intern with Women in the Academy and Professions and master's student at Duke Divinity School. She received her BA from Grinnell College, where she was a student leader in her InterVarsity chapter from 2015 to 2019. Kaya enjoys studying languages, ancient and modern, and dancing incessantly to meditate on theological concepts or to connect with her friends and community.

Renée Fisher reflects on the way her study of Psalms informed her creative filmmaking process in this installment of our series of arts devotionals at The Well.

Leslie Iwai explores Isaiah 53 through art in this installment of our series of arts devotionals at The Well.

Spiritual Formation
By Tirzah Villegas
Interpreting Scripture through Art: “To Be Seen”

Tirzah Villegas explores a text from the book of Jeremiah through a series of paintings in this installment of our series of arts devotionals at The Well.