Jesus Mentors a Woman: the story of the Samaritan woman 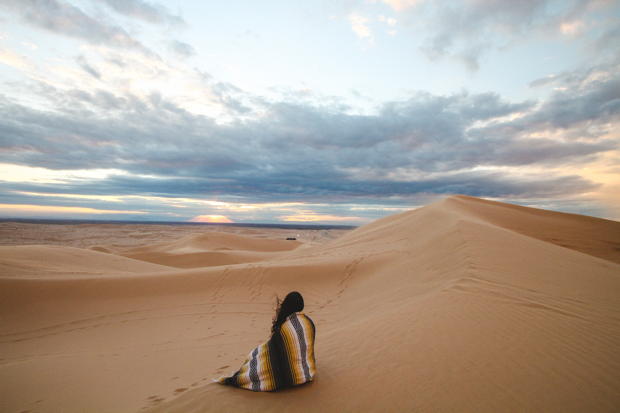 Why do so many women see themselves as second class citizens of God’s kingdom? I think a central factor is that women are not always encouraged to be full followers of Jesus. You might have heard, as I have, stories of men being discipled to follow Jesus wholeheartedly and at the same time hear stories of women being discipled to be the “correct” kind of wives and mothers. It seems as if the men are being invited to explore the richness and the breadth of being disciples of Jesus, and the women are being given a very narrow vision of who they are called to be and what they are called to do.

In contrast to a low view of women, Jesus’s interaction with the woman at the well demonstrates that he takes women seriously and sees us as full persons. Many have pointed out that the conversation Jesus had with the woman is radical on several fronts. It is radical because Jews did not associate with Samaritans. “You are a Jew and I am a Samaritan woman. How can you ask me for a drink?” (John 4: 9) It is radical because here was a man talking to a woman out in the open. The disciples were “surprised to find him talking with a woman” (John 4: 27). It is radical because Jesus is known to be a religious teacher and he is hanging out alone with a woman of dubious reputation. While each of these breaking of cultural barriers is earth-shattering, what stands out to me the most is the substance of the conversation.

It is in conversation with this ordinary woman that Jesus reveals that “God is spirit” (John 4:24). It intrigues me that John places the story of the Samaritan woman right after the story of Nicodemus. Jesus’ ways of interacting with Nicodemus and the Samaritan woman are very different and unusual. Nicodemus seeks out Jesus wanting a spiritual conversation, but Jesus doesn’t discuss theology with the religious scholar. Instead, Jesus speaks about the need for regeneration using images of childbirth. We see Nicodemus befuddled with the imagery from feminine experiences that he isn’t familiar with. Instead, Jesus reserves the theological discussion for the one who lacks standing at every level — as a woman, as a foreigner, and as someone with serious relationship problems. And unlike Nicodemus, she doesn’t even seek him out — it is Jesus who strikes up a conversation.

This is the only time in the gospel of John that Jesus describes the essence of God. When the woman tries to deflect Jesus’ scrutiny on her personal life by bringing up a safe religious topic (the appropriate venue for worship), Jesus broadens the topic and reveals to her (and to us) that “God is spirit” (John 4:24) and is to be worshipped “in the Spirit and in truth”(John 4:24). How is this significant? Jesus shows that teaching a woman spiritual matters one-on-one was important to him. Jesus also demonstrates that women are capable of hearing, understanding, reflecting on, and responding to meaty theology. Sadly, in reference to this conversation, my favorite commentary assumes that the woman was probably “out of her depth.” Perhaps, but this woman has a sense that the Messiah (of whom she obviously knows about) “will explain everything” (John 24:25) to her community. And besides, even the disciples were often out of their depth, not always immediately understanding what Jesus said.

“God is Spirit.” It seems ironic that a foundational piece of doctrine, one that theologians are still plumbing the depths of in order to understand the nature of God, was first revealed to an ordinary woman. And if that isn’t startling enough, this conversation happens when Jesus is alone with her — not just any woman, but someone who likely knew how to turn on her charm if she wanted to. But Jesus isn’t flustered or uncomfortable being alone with her. Instead of avoiding or ignoring her, he initiates a conversation with her that culminates in bringing hope and purpose to the woman’s life.

Jesus deliberately invites her to new ways of thinking and living. The "where" of worship doesn’t matter as much as the "who" of worship and the "how" of worship. Once Jesus reveals that he is the Messiah, she immediately sees part of her calling as inviting others to seek Jesus. Jesus noticing her and talking with her is important. But Jesus isn’t just being kind to her, he isn’t even compelled only with the urgency of helping her to see him as the Savior. Jesus also accords her respect, validating her as a person worthy enough for him to spend time and energy on in a deep theological conversation. She didn’t have to be a man for Jesus to engage her on an important topic. Jesus invites her to follow him, and to be a full follower.

Jesus’s one-on-one private conversation with the Samaritan woman is very different from the "Billy Graham rule" practiced by some evangelical leaders who try not to be alone with women who are not their wives. I understand the caution behind the practice. In a climate where religious leaders are viewed with distrust and judged alike for the actions of some, it is supposed to be a safeguard from false allegation. However, this practice limits the access that a woman can have to a male leader. All the pastoral training, knowledge, and experience that a male leader possesses becomes unavailable to a woman on an individual level. It precludes a woman leader from being mentored by a man. It denies single women access to pastoral care in many situations. It reduces a woman to a potential threat rather than a fellow human being. An object of fear, rather than a sister in the faith. To be sure, there are safeguards to follow when we minister to one another across gender. But we don’t need to cut off access. Instead, we can creatively come up with responsible ways of being alone together as men and women in friendships, at work, and in ministry. A male leader who wants to emulate Jesus needs to put the spiritual well-being of his people (including girls and women) ahead of protecting his reputation.

Women are to be formed to their full potential as disciples, just as Jesus’ conversation with the Samaritan woman propels her to be more than she has been thus far. In fact, as as she returns to the town, the woman immediately shares her testimony in a public way rather than going home to share her message privately with family and friends or looking for her current boyfriend to discuss her experience with. She tells the people — and many, if not most, would have been men — "come see a man who told me everything I ever did. Could this be the Messiah?"

I’ve taken for granted women’s equal status alongside men in God’s eyes, partly because of the circles I grew up in in Sri Lanka. I remember my father and younger men who served on our church board persuading a gifted but self-effacing older woman to step up to being a warden (board member) herself. Over seventy years ago, my maternal grandmother served on her church board, too. The very evangelical Anglican church my family worships in when we visit Sri Lanka has gifted women serving in key governing positions including on the church board. And in my twenties, I preached at the Sunday service in my home church a couple times as well.

Many women have embraced their full equality with men in value and gifting and have dived into the leadership that God has called them to — but they did not see themselves in this light while they were growing up in the Church. It is over time that they recognized their worth, as their understanding of the Scriptures deepened, either through their own study or hearing other people.

Jesus’s validation of this ordinary uneducated woman cuts across our assumptions of who is worthy of our time and best efforts to be discipled. If Jesus cuts across cultural and religious expectations of the "normal" modus operandi for teaching, what would following Jesus’ model look like for you? For whom do you reserve yourself to have the important conversations with?

Spiritual Formation
By Cindy Bunch
The Rewards of Noticing

Cindy Bunch invites us into her habit of nature-watching as a tool for staying grounded during a challenging season.