The Art of Holy Week and Easter: Entombment

We're delighted to be able to share this excerpt from Sister Wendy Beckett's book, The Art of Holy Week and Easter. This volume contains spiritual reflections on a curated series of artwork, specially chosen by art historian Sister Wendy Beckett. We're grateful to publisher SPCK and distributor InterVarsity Press for their generosity in sharing this excerpt. Find information about purchasing this book below. We hope this small offering enriches your observation of Holy Week. 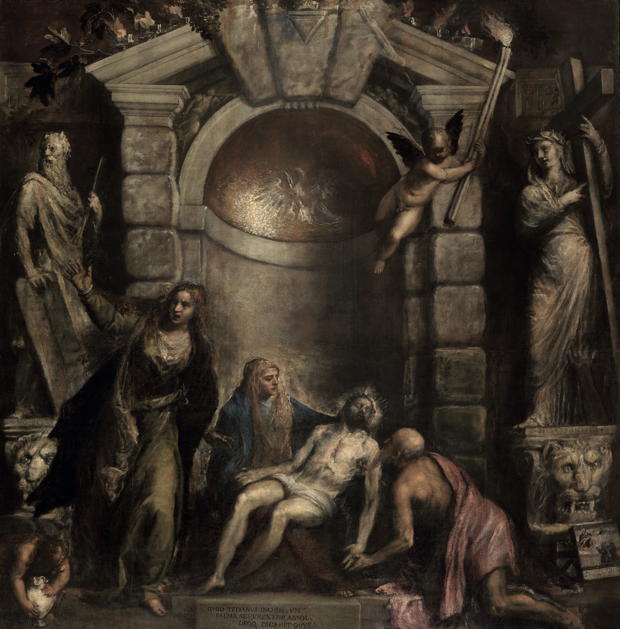 When Titian painted the Entombment, the plague was raging in Venice. The consciousness of death must have been on everyone’s mind, and perhaps specially on Titian’s, because he was very old. This work seems to be, in a way, his testimony to the world, this painting of the dead Christ and the living Mary, so silent and contained, yet somehow so united with her son in love.

There are two other central figures. One is Mary Magdalene, wild with grief, painted with enormous passion. She is fiercely angry about death: death is hateful, we are not meant for it. But on the other side of Christ is a very old man, coming as if in his second childhood on hands and knees. This is a self-portrait of the old Titian, affirming both his faith and his need of divine forgiveness.

The tomb where Christ will lie is a grand Renaissance construction, with dimly glimpsed statues on either side and a strange, almost hallucinatory landscape setting.

At the right there is a strange hand reaching up out of nothing, groping for light, for help, for salvation. To make this explicit, Titian has painted beneath it a small ex voto (a painted panel put on an altar as a silent prayer). In it Titian shows himself and his son Orazio on their knees, imploring deliverance from the epidemic. But before this painting reached the church, both of them were dead — of plague.

Was his prayer unanswered, his passion wasted? At the deepest level, the answer is no, because his passion has overcome death, drawing life out of darkness and wringing hope out of despair. In the purity of its beauty alone the Entombment celebrates eternity, which is what painting is all about.

Re-printed from The Art of Holy Week and Easter: Meditations on the Passion and Resurrection of Jesus by Sister Wendy Beckett with permission from SPCK.
Tags:
art | lent

Sister Wendy (1930-2018) was a Carmelite nun, consecrated virgin and art historian who became world famous in the 1990s when she presented a series of BBC documentaries on the history of painting. She was the author of over thirty books on Christian art, including the internationally bestselling The Story of Painting. Her most recent books include The Art of Lent, The Art of Advent and Sister Wendy’s 100 Best-loved Paintings.

Join us for a reflection on Alma Thomas's painting "Light Blue Nursery" in this third of our summer series on visio divina.

Join us for a reflection on Andrei Rublev's painting "Icon of the Holy Trinity" in this fourth of our summer series on visio divina.

Gretchen Ellis gives us a peek into Holly Ordway's story of transformation.