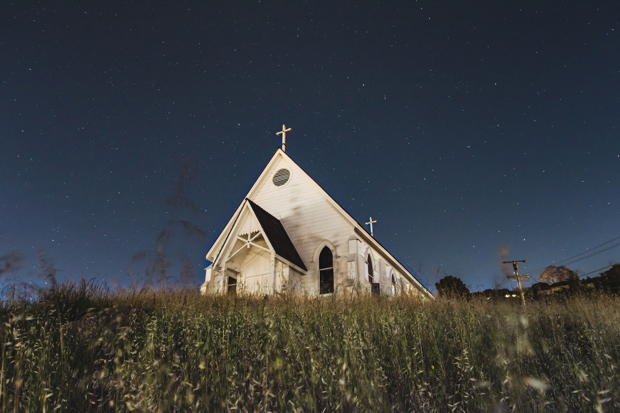 We’re delighted to share with you a taste of Jennifer Woodruff Tait’s new book, Christian History in Seven Sentences.

I’ll confess to you that I’m a history nerd —  and I think you should be too. I find Christian history fascinating for two reasons. First, it explains how and why we got to be the way we are. Christian faith and practice have always existed in context. As people shared the good news for the first time, as the fledgling church grew, and as more people became involved, decisions were made to address problems or embrace opportunities. Bit by bit we got to where we are today, but where we are today makes so much more sense with some historical background. Second, knowing Christian history helps us avoid mistakes already made by Christians and the church. In the spirit of “not reinventing the wheel,” we can look to the Christians of the past for guidance as to which wheels help us roll along, and which have broken spokes or flat tires.

Jennifer Woodruff Tait has given us a readable, delightfully detailed scope of Christian history, while reminding us why this information matters. If you’re looking for some summer reading that is both enjoyable reading and informative, we recommend this book. Below you’ll find a bit of her introduction, outlining her purpose and plans — it’s a super-helpful answer to Why? Then you’ll get a peek at the beginning of a chapter to give you a taste of how she goes about her task. 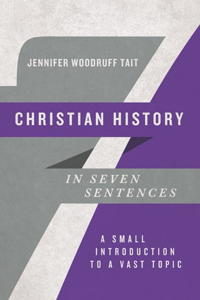 Christian History in Seven Sentences: A Small Introduction to a Vast Topic

For a long time, some branches of Christianity have been fearful of too much study of history as well — especially of the first fifteen hundred years or so of the church’s growth and development. We place them in the category of “tradition,” sometimes of “unbiblical tradition,” and focus on learning other aspects of the Christian life. We want to know what the Bible teaches us is good to do and what we should do today.

But our faith is a historical faith. Its truth rests on claims about history. We claim that an obscure Jewish rabbi really existed in the first century, born of a virgin peasant Galilean girl; that this rabbi taught his disciples certain things about God, life, and moral behavior; that he proclaimed himself to be the fulfillment of millennia of past events in the life of the Hebrew people; that he was executed as a common criminal when he was in his early thirties; and that, in contrast to everyone else who has ever been executed in the history of the human race, he rose from the dead, started a movement, and ascended into heaven promising to send his Spirit to guide the fledgling movement and to come back some day.

We readily admit that all of those are theological claims. But it is also true that they are historical claims. In fact, the traditional labels BC (“before Christ”) and AD (anno Domini, “year of our Lord”) for the years before and after Bethlehem make the bold historical claim that this is the event to end all other events; this is the hinge on which history turns, the moment at which history changed. And as we begin to explore what happened after Jesus Christ ascended into heaven and the Holy Spirit descended on the disciples, we begin to bridge the gap that exists between what the Bible teaches us to do and what we should do today.

As we try to understand how Jesus’ first followers coped with everything that had happened to them and what they did next, we are led very quickly from the study of the Bible into the history of the Christian church. Over twenty centuries, believers have looked to the reports of what Jesus and his followers said and did — our New Testament — and the account of previous generations of his people, the Hebrews — our Old Testament — and decided that it meant certain things for their belief and behavior. Sometimes, we think in hindsight, they got some things wrong. Sometimes we think they seem to have gotten it exactly right. But to cast out onto the waters of Christian living while ignoring the navigation charts these believers have laid out for us would be a dangerous enterprise. They can tell us where the rocks and shoals and waterfalls and sandbars are, and also where there is clear sailing.

This brief book is an attempt to help you put together that navigation chart. It focuses on seven sentences from important documents in church history and uses each sentence to explain the events and people that produced it and resulted from it.

There are names, and there are dates in this book, but the focus is on the narrative — how the story of Christ’s followers developed from those earliest days after Pentecost to today.

“When our Lord and Master Jesus Christ said, ‘Repent,’ he willed the entire life of believers to be one of repentance.”

With this sentence, a young Augustinian monk began proposing a set of theses for academic debate by his ecclesiastical superiors. He was worried about the abuse of money by leaders in the church. Especially, he wanted to protest the recent sales campaign of Johannes Tetzel, a Dominican friar who was raising money for the Fugger bank and the local archbishop, Albert of Brandenburg, by selling indulgences — money that would ultimately make its way back to Pope Leo X for the building of Saint Peter’s Basilica in Rome. Surely, if the people in charge knew, he thought, they would do something.

They did something — but it was not exactly the something that the thirty-three-year-old Luther wanted.

Luther was not the first to call for reform in the way the medieval Western church was preaching, teaching, and living out the gospel. Cries for such reform had echoed down previous centuries, as we’ve read, and many in the early sixteenth century already wanted change. In Basel, humanist author Desiderius Erasmus (1466–1536) had just published a controversial Greek New Testament; in Glarus, priest Huldrych Zwingli (1484–1531) was reading it. But for better or worse, Luther’s Ninety‐Five Theses, meant for an academic debating hall, were what set off the thunderstorm that reshaped Western Christianity.

Where We All Started?

Some years ago, when I was in graduate school at Duke University, I was going over the course schedule with my mother on the phone and happened to mention that Duke offered a class on Luther. “Oh, you should take that one,” she said. “That’s where we all started.” By we she meant Protestant we.

I entered the class with the picture many of us have in our heads: the quiet October Wednesday morning in 1517, the friar creeping to the door of All Saints’ Church in Wittenberg and with one nail striking a death blow to medieval Catholicism. But by the end of the course I learned that the history of the Reformation was far more complex than I had previously expected.

First of all, we have no reason to believe that Luther actually nailed the theses to the door. We have no reason to believe he didn’t, but the earliest report of the nailing comes from his friend Philip Melanchthon (1497–1560) after his death. The door “functioned as a bulletin board for various announcements related to academic and church affairs,” so it’s certainly possible he posted them; “whether or not Luther put the theses on the door, he certainly mailed them off that day to his superiors with an annoyed note.”

Ironically, by the time I finished that class on Luther all those years ago, I was able to reaffirm a bigger definition of we, one that includes all Christians. We all started together, two thousand years ago at the foot of the cross and at the door of the empty tomb. But we sometimes forget, and divisions that began five hundred years ago run deep. At such a time, it helps to remember that ultimately we are all saved by grace through faith, and to ponder that piece of paper in Luther’s pocket when he died: “We are beggars, that’s the truth.”

Photo by Matt McLean on StockSnap.

Arts, Books, and Media
By Ashley Hales
A Spacious Life: An Excerpt

Dive into this snapshot of A Spacious Life: Trading Hustle and Hurry for the Goodness of Limits as Ashley Hales explores the tension between dreams and boundaries.