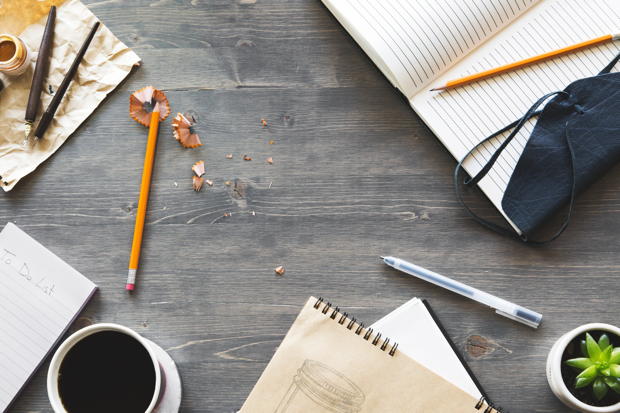 Kate Chopin, author of The Awakening, began her career by writing one-hundred short stories while caring for her family of six after her husband died of malaria: “According to her daughter, she preferred to write with her children ‘swarming about her.’” In Daily Rituals: Women at Work, Mason Currey describes how Chopin would write on a lapboard on an irregular schedule whenever a moment of inspiration hit her. Anyone who has ever spent a day working from home with children in the house can probably relate well these images of grabbing a moment in the midst of household activity from a woman working in the 1890s. 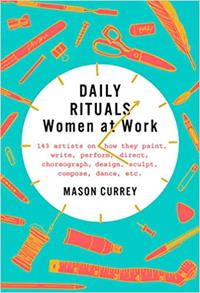 Currey’s book is a follow-up to his 2013 book Daily Rituals: How Artists Work. In the introduction to his 2019 work, he describes how he chose to write this book in order to correct the “glaring gender imbalance” of his first book in which only 27 of the 161 individuals he included were women. He says of the men covered in the book

"The obstacles they faced were frequently mitigated by devoted wives, paid servants, sizable inheritances, and, oh yes, centuries of accrued privilege. . . . Too often the Great Mind’s daily routine seems quaintly fantastical, with neatly apportioned rounds of work, walks, and naps unsullied by such pedestrian concerns as earning money, preparing meals, or spending time with loved ones."

When he focused on women, he found that barriers included

For example, he offers an account of the life of Stella Bowen, an Australian painter who married novelist Ford Madox Ford, author of The Good Soldier, in 1918. She cared for their daughter and her husband's emotional needs. She paid the bills and protected him from interruptions to his writing. In her memoir, Drawn from Life, she writes that her husband never understood why she found it so difficult to paint: “Pursuing art is not just a matter of finding the time — it is a matter of having a free spirit to bring to it.” It was not until after he had an affair and they divorced that she was able to focus on her painting.

Painter Niki de Saint Phalle was married to writer Harry Mathews. Years later recalled a painful remark made by her husband’s friend at dinner in 1959, “So you’re one of those writer’s wives that paint.”

The obstacles and biases that Bowen, de Saint Phalle, and so many other women faced continue to be negative factors in the creative life of women even to this day. And yet we also have examples all around us of women who work, create, teach, research, paint, act, write, dance, and thrive against all the odds. How do they do it? How can we do it? If we believe that our work is a place of calling from God, then what does faithfulness to making space for it look like?

"If we believe that our work is a place of calling from God, then what does faithfulness to making space for it look like?"

In the accounts of the 143 women in Daily Rituals: Women at Work, three core themes are repeated: for some it was defining and protecting space for solitude, while for others it was fitting work in around household obligations (like Chopin), and, finally, many women emphasized the way in which creativity can emerge amidst constraints. While the examples that follow are from women who are writers and artists, the underlying obstacles to a woman’s working life and accompanying solutions are universal.

Playwright Lillian Hellman required solitude to work. She did most of her writing on her 130-acre farm outside New York City. She loved to entertain there, but to protect her morning writing time from houseguests, she posted this warning on her study door in the early 1940s:

THIS ROOM IS USED FOR WORK

DO NOT ENTER WITHOUT KNOCKING

AFTER YOU KNOCK, WAIT FOR AN ANSWER

IF YOU GET NO ANSWER, GO AWAY AND

THIS MEANS NIGHT OR DAY

By the order of the Hellman-Military-Commission-for-Playwrights.

Court-martialling will take place in the barn,

And your trial will not be a fair one.

The message is comic, but the intent is serious. In this, Hellman models for us the way in which she states the significance of her work — by protecting her space and time.

The contemporary Chilean American author Isabel Allende has dedicated rooms for writing. In her two-room set up she has one room set aside for her research for the project in progress along with her bead-necklace-making supplies. In the other room she has “an altar and a big desk with a computer that’s not connected to the Internet. ‘It’s just for the writing,’ she said. ‘It only contains the book and the research.’” In this appealing set-up she has space for a tactile creative outlet in her bead-making, a spiritual space in her altar, and a computer that is set aside for writing without distraction.

Alice Walker had very limited writing time while she was working on The Color Purple in 1970. As the single mother of an elementary-school-aged daughter, she would write only weekdays between 10:30 am and 3 pm. Working in this way, she completed The Color Purple in just a year. In this she discovered that confined time for work — such as a fast-approaching deadline — can focus our attention and speed up the process.

Another element to Walker’s process in developing a new book is “she requires gestations periods of a year or two before she can actually put pen to paper. She uses that time to think deeply about the book, and to ‘just clear the horizon for one thing.’” Women’s lives often afford much thinking time — while playing with children at the park, doing dishes, waiting for soccer practice to end, or pulling weeds in the yard. This too can be creative time as ideas for work gestate.

While Walker’s approach was more disciplined with daily writing and regular spaces for solitude, in some ways she was also following the pattern we saw earlier in the example of Kate Chopin. That is, fitting creative work into the spaces between the obligations of her life. Filmmaker Agnès Varda exemplified this second approach addressing the problem of how to be a “’superwoman’ and lead several lives at once” managing children, love, and career, working with the idea of constraints.

Varda wondered, “Could I manage to restart my creativity from within these limitations [of home and motherhood]?” In 1975, Varda chose to create a film within the self-defined perimeter of eighty-meters from her home, setting up a cable of that length extending from her electrical box to define the space for the filming. The result was the documentary Daguerréotypes about the daily lives of the people working in her Paris neighborhood.

Contemporary poet and Virginia Tech professor, Nikki Giovanni, also takes an approach similar to that of Chopin a century before her, writing irregularly, when she can and when she’s inspired. In 2017 she said: “You have to realize, my generation was the Black Power generation. We were always on the go, we always had something to do, someplace we needed to be. So we got used to writing on the go.” Giovanni emphasizes that the key to staying inspired is to read something — anything — every day.

Whether life and your own temperament pushes you toward working in the crevices or to working on a schedule and whether you need a long gestation period or you just need to start, the key is to honor your own work and calling. You may be surprised what you can produce even in the midst of life’s constraints. What’s the routine that will give you the space you need to create?

Cindy Bunch is associate publisher and director of editorial at InterVarsity Press, where she has worked for more than thirty years. She acquires and develops for the Formatio line of spiritual formation books. She is the author of Be Kind to Yourself. You can follow her on Instagram at cindy.bunch or on Twitter at @cindybunch.

Dancer and writer Marlita Hill sits down with us to discuss the intersection of faith, art, and teaching.