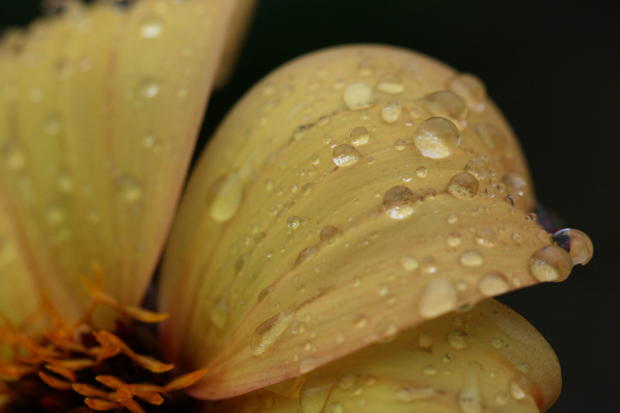 I.
Thunder growls hatred. Lightning
torches the clouds. What can we do now
but ride out disaster
as trees toss their necks like stallions,
as the carnal rain swamps us?

II.
Dot, dot, dot, dash. It’s the Fifth.
Old Ludwig having his way again,
the stooped deaf magician turning his wheel so the craft will slip through,
the violins cutting the waves,
timpani puffing out like sails.

III.
I am thinking how inclement news—
the lump invading my dear friend’s body—
threads its signal to my reptilian brain-stem,
passing its code to the cerebral cortex, then
how the order faithfully goes out
to check ruptures and neurofibrillary tangles,
to hold against dementia and despair.

IV.
As we sit, hands folded in our laps,
ranks and ranks of us, wedding rings,
cuticles, everything groomed and listening,
how near disaster lurks—bollixed messages,
finger hinges not opening on command,
some small failure swelling to commotion
till chaos flashes in the circuits
and then it’s all-out war, words
snapping like masts in the pouring
dark. And who will save us?

V.
It is a mystery, how we pick our way,
repeat old codes, how V stands for both five and victory,
how, years after Beethoven died,
Morse made dot, dot, dot, dash depict
the letter V. How that code for victory
sang above the dissonance of war
to the starving French all that Nazi winter:
Dot, dot, dot, dash. How we
rage, love, survive.

This poem can be found in Helping the Morning by Jeanne Murray Walker.

Photo by Travel Photographer from StockSnap.

Jeanne Murray Walker (PhD, University of Pennsylvania) is a poet and playwright whose work has been widely published and performed. She heads the creative writing program at the University of Delaware, where she has been a professor of English for forty years. She also serves as a mentor in the low-residency M.F.A. program at Seattle Pacific University and on the boards of Shenandoah and Image magazines.

Her poems and essays have been published in The American Poetry Review, Poetry, The Atlantic Monthly, The Georgia Review, Shenandoah, The Christian Century, Blackbird, Image and several hundred other journals. Her scripts have been performed in theaters across the United States. They are published by Dramatic Publishing Company, and they are archived in North American Women's Drama. Walker is coeditor (with Daryl Tippens) of Shadow and Light: Literature and the Life of Faith and author of a memoir, The Geography of Memory. She is the author of seven books of poetry in addition to Helping the Morning: New and Selected Poems.

Walker's work has been honored with a National Endowment for the Arts Award, a Pew Fellowship in the Arts, eight Pennsylvania Council on the Arts Fellowships, the Glenna Luschei-Prairie Schooner Prize, many Pushcart nominations, inclusion in Best American Poetry, and inclusion in the 100-year anniversary anthology of Poetry magazine.

Arts, Books, and Media
By Ada Limón
Poems for Contemplation: "How to Triumph Like a Girl"

Poet Ada Limón probes into a vivid experience in this offering from our Summer 2020 Poetry Series.