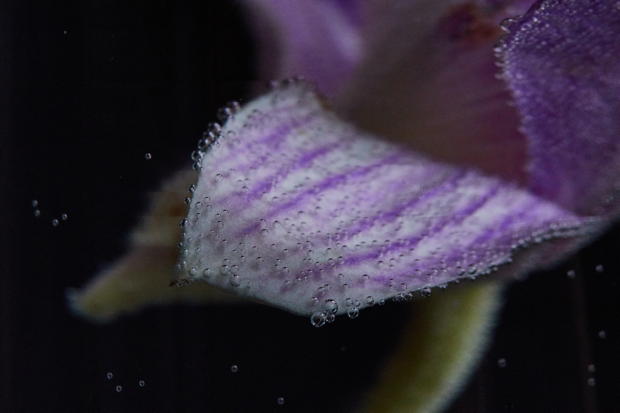 You shout my name
from beyond my dreams,
beyond the picture window
of this Rosarito beach house.
Rushing from bed to shore
I glimpse their backs—
volcanoes rising out of the sea.
Your back, a blue-black silhouette,
feet wet with the wash of morning waves.
Fountains spring from mammal minds,
my hands lifting a splash of sand.
I'm on my knees,
toes finding a cool prayer
beneath them, fingers pressing
sea foam to my temples,
while you open arms wide as a generation,
raise them to a compass point,
dive.
If you could reach them,
you would ride their fins
under the horizon,
then surf the crash of waves
left in their wake.
And if I could grasp
my own fear,
I'd drown it,
leave it breathless and blue
as this ocean,
as the brilliant backs
of whales
surfacing
for air.

Photo by Macro Mama from StockSnap.

A native of Milwaukee, Wisconsin, Brenda Cárdenas is the author of two poetry collections, From the Tongues of Brick and Stone (Momotombo Press, 2005) and Boomerang (Bilingual Review Press, 2009), as well as the coeditor of Between the Heart and the Land / Entre el corazon y la tierra: Latina Poets in the Midwest. She writes in a blend of English and Spanish, which she has said reflects her interest in “the interconnectedness and juxtapositions of difference and similarity between seemingly disparate peoples, events, places, and experiences.” While Cárdenas often writes in free verse, she also experiments with a variety of forms, and, as Craig Santos Perez has noted, “This syncretic formal impulse reflects the polyphonic texture of Cárdenas’s language-scape.” Her poetry has appeared in a number of anthologies and journals, including The City Visible: Chicago Poetry for the New Century (2007) and The Wind Shifts: New Latino Poetry (2007). She is a professor of English at the University of Wisconsin-Milwaukee, and was Milwaukee’s poet laureate from 2010 to 2012.

Luci Shaw bridges the gap between present day and biblical times in this offering from our Summer 2020 Poetry Series.