(Actress sits on a museum bench facing audience. Behind her is projected an image of Alessandro Vittoria’s bronze relief, The Annunciation. She is dressed in urban clothing, an art museum tote bag at her feet. She is knitting — quite fixedly. Her project is currently indeterminate and scarlet red. She notices the audience and tries to make a joke.) 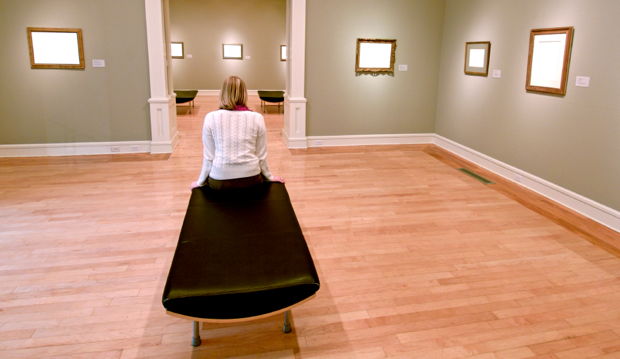 Be careful. Knitting needles are dangerous weapons, I’m told. (laughs — then clears her throat) I shouldn’t joke. It could be like the airport where all jests are taken in earnest. I’m not supposed to have these in here. Museum policy. But don’t tell. Artie, over there, could get in trouble. (conspiratorially) I was lucky to find a museum guard who looks the other way. He has a knitting mother. He knows the compulsion a good worsted weight yarn in a stockinette stitch can have on a woman. Let's me do my thing. As long as I can sneak the needles in, I’m good to go.

(nods toward the bronze as if it is in front of her) Knitting away with the Virgin Mary. . . Mother of the divine Word. A graduate student stuck in chapter three of a five chapter dissertation will try almost anything.

(she smiles stiffly, continuing to knit as she speaks)

Do you knit? Most people knit to relax. . . I do guilt knitting. Something to keep my hands busy while I’m. . . hiding out. You don’t run into members of your committee at the Art Institute nearly as often as you do at the University library. And the knitting itself is quite reassuring. . . lots of repetition and forgiveness. You make a mistake, it unravels beautifully. You just. . . (she pantomimes pulling out a row with a trill of the tongue) . . . pull it out. Untangling anything should be that easy. I like pulling out the stitches more than I like making them. It’s the historian in me. Unraveling patterns to find the (with sarcastic self-importance) single causal thread. (with a sheepish smile) Oh, who’m I kidding? Unraveling the stitches means I’m not lugging around a 17-foot scarf that gives my procrastination away. I’ve been knitting ever since I stopped writing.

(gestures toward the bronze again)

I saw this bronze about then, too. I couldn’t get it out of my head.

Annunciation paintings are a dime a dozen around this place. . . but this one’s different.

She’s scared, isn’t she? I never pictured her scared before. She looks like she’s ready to bolt. I suppose that makes sense. She’s got a tough row to hoe. But there are worse things. Like never giving birth to any Word worth anything. . . much less, a Word to change the world. Most women don’t get annunciations in the middle of the night informing them they are “highly favored”. . . or solving the seminal theoretical quandary Dr. Landau posed in their proposal review. I’d like an angel Gabriel for that — thank you very much.

Some days I’m scared it’s going to get done, and it won’t be worth the trees I killed to write it. You know, not all of us are Marys. Some of us are just ordinary girls with greater than average intellect and a generally good work ethic. . . when we’re not hiding out . . . and knitting.

(sees Artie offstage, nods in his direction, and quickly puts knitting in bag; in explanation,) We have a signal.

(uncomfortable, with her hands still) I guess I think if I sit here long enough and put in my time, Mother Mary will tell me her secret. . . how she got picked. How I can get picked too.

Trust me, I wouldn’t be here if I didn’t think it would help. Museums freak me out. Too much space. . . too much white on the walls. Reminds me of a glowing white computer screen waiting for words.

But then, there is that bronze. . . the wind whipping Mary’s veil. I can almost feel that wind. It reminds me of the afternoon storms I saw when I was a girl. My father spent summers in Indonesia studying with batik masters. He was a textile artist—and I used to fall asleep under cloths he had painted by hand—the rain pounding the roof. He knew something about inspiration—my dad—about Spirit bigger than you that fills you up with color and life. . . and makes a difference. He always said he wanted to paint canvases that people could run between their fingers. . . cloths that people wrapped their babies in or spread on their marriage beds. Cloths that draped a memory.

(looks in Artie’s direction again and takes out knitting) Coast is clear.

My dad’s why I’m a historian in the first place. I’m not an artist. But, he taught me the importance of everyday things, everyday events. My dad loved the weave of a cloth — the part that every thread would play. I thought that’s what studying history would mean — giving every thread its due.

But now I’m somewhere in the middle of my tome on “Emergent Nationalism and Labor Movements in Sumatran Palm Plantations, 1913-1947” — (self-deprecating aside) ya’ want to read it already don’t you? — and I wonder. I wonder if all these words and all this work matter nearly as much as I want them to. I never see the whole cloth anymore — just threads — and lately, even those seem to slip in and out of focus.

The knitting helps. . . it reminds me what a single thread can do.

(looking at yarn in her hands) And what it can’t.

I taught myself to knit seven months ago. I’m still not very good. I always get my stitches too tight. I can’t paint like my dad—but I thought I could at least make something warm to wrap up a baby on cold nights. Something a child might remember as she grew. Jay and I’d been trying for two years. And then it came. . . my own Annunciation. My own personal Gabriel in the form of two little lines on a plastic stick.

And then one afternoon, I was home alone. No fall or trauma. No warning. Just some cramping, and a scarlet thread of blood that didn’t stop for days. And even though there was no more baby to knit for, I couldn’t put the needles away. To see them sitting unused was just one more reminder that God hadn’t send an angel for me.

My dad used to take me to shadow puppet plays in Yogya. A puppeteer tells these epics with intricately carved puppets that move and cast shadows behind a lighted screen. The performance goes on all night. We used to argue about what side of the screen to sit on — because you could sit on either. . . you could watch the puppeteer himself, from the back side of the screen, moving three or four puppets at a time. . . or you could sit in front and watch the illusion. . . the shadows coming to life. My dad always wanted the illusion, of course. I always wanted to see the man behind the screen. I wanted to see the man making the shadows.

And I still do. I want to see this God whose shadows are supposed to be dancing across my life, because I think He’s left the building. “The Holy Spirit will overshadow you” Gabriel says to Mary. Well, I’ve got no such promise from my Puppeteer.

I showed up, and God didn’t. My body doesn’t do what it’s supposed to do. . . my words are words that have all been said before—I have nothing interesting to say. Nothing shiny and brilliant and full of wind and color — all I have is me and silent, empty spaces. . . and I’m not to blame. I put in the time. That angel (indicates the picture) just never came for me.

I don’t want to write anymore if my work is just another miscarriage waiting to happen, if it was never meant to come to term. Maybe some women are meant to have annunciations and some aren’t. Some women have words that fall to them fully formed like babies from heaven. . . and some spend their lives writing summaries of words already written.

And so I toss the train stubs from my daily ride downtown — so he won’t know I’m playing hooky. I pay the museum admission fee with cash, like this is some great, sad, unfaithfulness. Which I suppose it is.

And I sit here with the only Mary I’ve seen smart enough to be scared of a God who doesn’t let you keep the babies you conceive. . . or even the babies you bear. A Mary, who knows the danger of saying, “Let it be with me according to your word,” but says it anyway. A Mary, who has babies fluttering all around her, cluttering the sky. No halos or stillness, just a storm—and an angel who shows up shouting his “Hail Mary” over the wind. . . (with indignation) telling her to not to be afraid.

(speaking to the angel in the painting as if he is in front of her) Do you even know what it’ll cost to try again? To make space in my life for words and joy and the emptiness that comes every month when yet another scarlet thread means we unravel our hopes and start from the beginning? Do you know what it will cost to lay down this (she indicates the knitting) work of my hands, so something new can come? To lay aside this cloth that drapes my memory?

(As she faces the picture, her face changes—a dawning insight. She gathers her composure and speaks very simply)

I know why Mary’s afraid. It’s not that the angel isn’t coming. It’s that he’s already here. . . right here in this quiet space. . . waiting for an answer.

(She becomes very still, her knitting rests on her lap.)

In Greek mythology, there were three Fates who wove the fabric of the world. And every time they cut one of the threads, somebody died. That’s the joy of knitting. No scissors involved. Nothing ever gets cut. . . and it never has to be finished. . . as long as you keep at it. Especially if you keep pulling out your stitches. It’s a much less dangerous pastime. . . no matter what Museum policy says.

(She gathers courage, and slowly, with sacred tenderness, takes scissors from her bag and cuts the thread connecting the ball of yarn to her work.)

(She gently wraps her work around her needles and puts them away. Then with a breath, she stands and leaves the stage, leaving behind a scarlet ball of yarn.)

Requests for permission to perform The Annunciation should be directed to Jerusha Matsen Neal through The Well.

Staff Resources
By Stephanie White
Grad Women Support Group I: Why We Need It

UW-Madison grad women reflect on the power and necessity of a support group in their academic lives.

In this special episode of our podcast, Sarah Akutagawa offers her take on a parable to bring a message of encouragement for grad students during this unusual season.