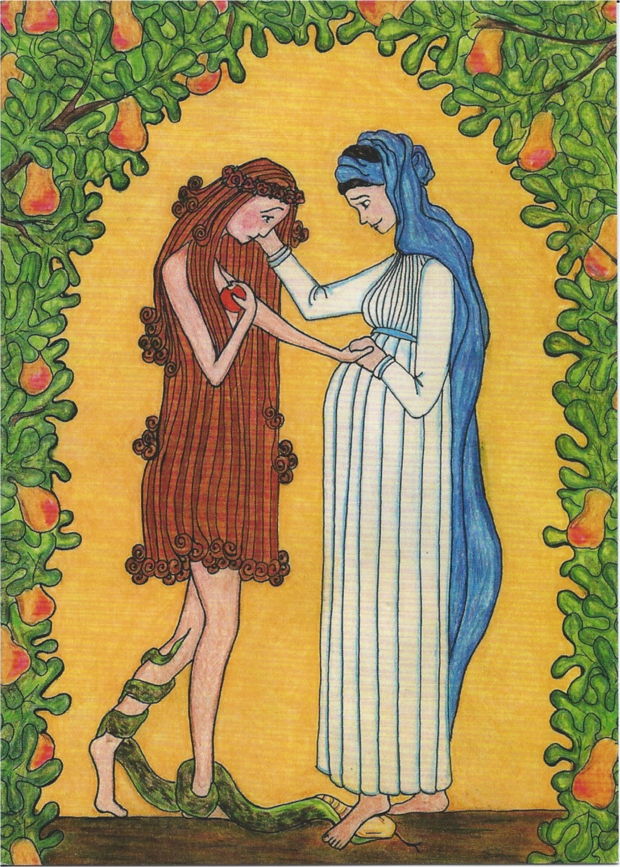 Eva
First mother
has learned in the shadow of knowledge, grief:
she cannot meet her soulmate’s new-created need.
His flesh recoils from healing-meaning touch;
the furtive pain in eyes and stealthy hush
unsettle her, bring shame to nakedness.
Her Adam, mirror of their kindred bliss,
cannot now countenance her.
And she without the eye of his beholding
sees only his and not her own disfigured image.
She was mistaken, is now
become the emblem of his loss,
and every effort to console, redeem the beauty
of shared garden grace, breeds guilt alone,
dread offspring of their broken trothe.

Sin only cannot the love of woman bear:
she has wooed him into pain for which there is no remedy in her.

Ave
Maria,
heavy with child and deep in thrall of winter, waits:
the night so bleak and cold, unwelcoming.
Within her, Creator clamoring to be born
as indifferent creatures forage in hay.
“How can this be, since I am still a maid?”
she asked the flaming stranger, mystified.
Now, a strong hand moves to cradle her head,
another smoothes damp tangles from her brow.
Dear, patient Joseph, closer than air,
more distant than starlight tonight,
he who has known only the miracle.
She cries out now as shuddering pain
descends upon her, wave on wave,
the ancient curse unleashed, undone, in blood-soaked birth
while overhead, the barn’s cross-membered beams
betoken dread she cannot comprehend.

In her travail deliverance is sealed at last:
the grace she bears will carry Adam’s sin and Eva’s shame.

Katherine Jeffrey graduated with a Masters in Christian Studies from Regent College when the world was young.  Since then she has been a professional book editor and freelance writer, academic wife, homeschooling mom, and occasional dabbler in the literary arts. Her slim sheaf of poems owes to the encouragement of Vincent van Gogh: “if you hear a voice within you say ‘you cannot paint,’ then by all means paint and that voice will be silenced.” A transplanted Canadian, she lives with her husband David on Lake Whitney in central Texas.

Spiritual Formation
By Caroline Triscik
Five Minutes of Peace: Be Present Together

Caroline Triscik discovers the value of merely sitting in the presence of another during her five minutes of peace.