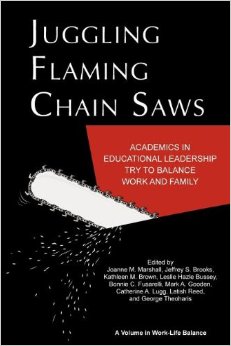 For the past couple of months, I’ve been carrying around two books with odd titles in my backpack. (Yes, even though I’m 40 years old, I still use a backpack.) One is called Faithful is Successful: Notes to the Driven Pilgrim (which also has a blog accompanying it, found here and is featured in a series at the Emerging Scholars blog) the other, even more startlingly, Juggling Flaming Chain Saws: Academics in Educational Leadership Try to Balance Work and Family (read a great interview with lead editor Joanne Marshall here at The Well.)

Both books are about something that seems to all of us to be increasingly difficult in a society where productivity and efficiency are prized above community and relationship, and the work which could once be shut away at 5:00 now follows us home courtesy of thousands of tiny electronic devices. It’s also a society where gender roles are in flux but expectations — certainly academia’s expectations — assume that any given academic will be taking care of work while other family members take care of life. As Marshall comments in her introduction to Flaming Chain Saws, “Policies and practices...remain from the time when higher education was populated mostly by married White male faculty who were successful in their academic work because they depended upon the support of their wives to manage many of the not-work aspects of their lives. I imagine a tweedy White man, coming home from the university to greet his wife and children and eat the dinner she’s prepared for him, and then disappearing into his study for the rest of the evening with his pipe to write and think great thoughts. If that professor ever existed, he is now emeritus” (xiii-xiv).

Both books are about privileging a way that is faithful over a way that is successful. The book Faithful is Successful does this from an explicitly Christian perspective (the contributors are all Harvey Fellows, graduates of a Christian scholarship program that funds  students “who are pursuing graduate studies at premier universities in fields considered to be underrepresented by Christians and who possess a unique vision to impact society through their vocations.”) Flaming Chain Saws is not explicitly Christian in its outlook, though it is obvious that quite a few of the contributors are Christians and that their faith has played a role in their attempts to find balance and not drop the chain saws. (This is also true, by the way, of the one Buddhist practitioner in the book.) 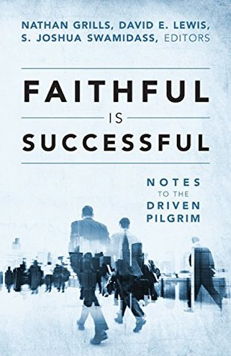 Nearly all the contributors to both books have stories to tell of times when making choices for the good of family life or for the care of significant others or for the sake of Christian vocation, conflicted with expectations of “worldly” success. In this regard, my favorite essays, one from each book, are “Seeing What’s Around: Vision and Vocation” in Faithful is Successful, Brian McGraw’s tale of how he started out to be a spy and discovered his vocation was something very different, and “Flying By the Seat of My Pants” in Flaming Chain Saws, Katherine Cumings Mansfield’s advice to idealistic graduate students.

The fact that these "faithful versus successful" conflicts are frequent, difficult, and misunderstood is reflected in the number of times I had to explain to people next to me in coffeeshops or beside me in airplanes that the title Faithful is Successful did not mean “if you are faithful you will be successful” — in fact, quite the opposite.

Both books are also about providing models of ways to be faithful to a holistic life — examples both positive, from people who have found strategies and approaches that work for them, and negative, from people who have made missteps, even huge ones, and who have learned from them. (Marshall’s own story comes to mind — of teaching a college course while “discreetly collecting” her urine in Tupperware containers for testing even after being diagnosed with preeclampsia and told to rest; continuing to prep her class even during the process of being admitted to the hospital; and insisting that she couldn’t deliver the baby prematurely because she had to teach the next day.) I think it is wise to read them together in this regard, as Marcia Bosscher charged me to do when she asked me to write this review. Faithful is Successful, while admirably international in the scope of its contributors, is completely white-collar in terms of its authors' origins (which the authors admit is a weakness) and also overwhelmingly male (which they don’t). Flaming Chain Saws, which I originally thought would be more myopic due to the fact that all of the contributors work in a single academic field, broadens the scope in terms of gender, sexual orientation, and class — while all of the contributors are now middle-class academics, quite a few came from blue-collar backgrounds and describe the ways in which those backgrounds interacted, often problematically, with the expectations of academia.

Both books, too, continue to illustrate in vivid colors a point I’ve talked about here at The Well before: we live amid a lot of broken systems. Academia is the broken system with which I am most familiar, and which Flaming Chain Saws spends its time critiquing, but Faithful is Successful also talks about Christians attempting to live faithfully amid brokenness in business, art, and medicine. Faithful is Successful has a more optimistic tone about the ability of our faithfulness to do something about the brokenness — a tone that I think has to do both with the explicitly Christian outlook of the book, and its white-collar orientation. But the point is still well-taken.

McGraw, in his wonderful essay about how life throws curveballs at you, writes, “Sometimes, it seems to me, to fulfill one’s vocation means working out what we are called to do wherever it is we get planted rather than always figuring out how we can re-plant ourselves elsewhere so as to do what we are ‘really supposed to be doing.’” (20) This is, I think, tremendously helpful advice that flies in the face of so much that modern secular society teaches us about how to shape, form, and seize productive control of our lives. But it should never be interpreted as counsel to accept injustice. Faithfulness may include acceptance, but never passivity. Lack of success does not mean lack of witness. Both these books remind us: don’t sell out to succeed, thinking you can do things for Jesus when you get to the top of the heap. Live your faithful life out loud. Be ready to explain why you don’t accept a set of broken rules. Be willing to accept the consequences, and trust that the One who had no place to lay his head will not abandon you when they come.

Blog
By Stephanie White
Fighting the Fear: Because Now It’s for Real

This past summer, after taking five months off to be with my newborn, I went back to work. My department chair was, I think, trying to do me a solid, and he assigned me to teach two online classes. This made my days completely flexible...

Dear Mentor: What is the best way to handle negative feedback?

The Well’s mentors discuss how to handle negative feedback on class evaluations and in other places.