In Not God’s Type: An Atheist Academic Lays Down Her Arms, Holly Ordway describes herself pre-conversion as “an atheist at odds with myself” (p.37). But she’s told the story before in Not God’s Type: A Rational Academic Finds a Radical Faith (2010). Why rewrite it? Besides making use of another compelling subtitle, Ordway puts needed emphasis in this version on the importance of imagination in her story of conversion: 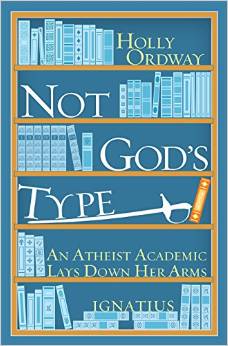 I came to see that those few months of intense research and reflection in which I considered my atheism did not mark so much a change, as a tipping point. When I encountered arguments and evidence for Christianity, my reason was finally able to align with my imagination, which, like a compass needle, had tremulously pointed toward true north for many years. (pp.xvi-xvii)

She begins in her childhood and early academic career, where interaction with fantasy novels like Lewis’s Chronicles of Narnia and Tolkien’s Lord of the Rings painted a picture of a world that “felt right.” Specifically, Tolkien’s works “had a place for both hope and disappointment, achievement and failure....It was a world in which there is darkness, but also real light, a light that shines in the darkness and is not extinguished” (p.25).

Fantasy and imagination echoed the longings of her soul that she could not quite define. She admits, however, that her imagination was long at odds with her atheistic beliefs. She had treated art and literature as if they had real meaning but failed to acknowledge that this contradicted her belief that life itself had no meaning (p.11).

So, while the seeds sown by imagination lay dormant in her life, her first steps toward coming to faith came in the form of a series of intellectual and rational debates with her fencing coach (yes, she fences, with swords — hence the subtitle). The majority of the book details how, with patience and respect, Josh walked her through logical arguments first for the existence of a First Cause (a cause outside of the universe that brought it into being), then to a personal First Cause called God, and eventually to the Resurrection of Jesus Christ, leading to Christian faith. Her journey here was primarily a journey of reason, or, as she describes it, of bringing her reason in line with her imagination. The final few chapters of the story chronicle her move from the Protestant world to Roman Catholicism:

She uses C. S. Lewis’ image (from Mere Christianity) of Christianity as a house. With "mere" Christianity one enters the house and finds a hallway. However, one cannot linger forever in the hall, one must choose a room (i.e., a strand of tradition) to dwell in and “[b]oth reason and imagination pointed me in one direction, toward the Catholic Church” (p.182).

I appreciate Ordway’s well-written metaphors that not only clarify and undergird her narrative, but beautify it. For example, she tells the story of how, when she was around eight years old, she didn’t know she needed glasses and just assumed that the fuzzy world around her was normal. Then, her brother handed her his glasses and she realized with sharp clarity just what she had been missing. Now, as an adult, she feels on edge without her glasses. She uses this as a metaphor for her life as an atheist, “when I consider my life before I knew Christ, I recognize how limited my vision was” (p.6).

I also appreciate the structure of her story. She interweaves chapters detailing her move to faith with “Interludes” describing special moments of her life after coming to faith. Her work is not so much a three-act play as a poem or a symphony. Ordway breaks her story into stanzas and artistically inserts snippets of her post-conversion life into the main storyline. In a sense, she gives away the end right at the beginning and beautifully interweaves her far past with her recent experience.

Her story is not just a nice and interesting story of how an atheist became a Christian, it is an apologetic in and of itself, a compelling argument for how and why Christian outreach to non-believers should be done in a way that marries the rational and the imaginative. It is this account — the account of the necessity of reason and imagination in apologetics and how successful such an approach can be — that makes her work of utmost significance to Christian apologetics today. In her words,

Too often in apologetics today, Christians are tempted to look for silver-bullet arguments, the right thing to say at the right time so that the other person will concede....Or worse, apologists may treat argument as a rhetorical kung-fu move to "defeat" or "crush" an atheist....All too often, we talk past the very people we are trying to help. (p.xv-xvi)

I find Ordway’s tale a refreshing breath of fresh air in a Christian “testimony” culture that emphasizes dramatic, moral changes of lifestyle. Her journey is thankfully bereft of the Dark and Dangerous. It is a reminder that testimonies are about the Mighty Act of God’s redemption, saving us from “the twofold darkness into which I was born: sin and ignorance” (Thomas Aquinas, Prayer Before Study). In her life, it takes the shape of a gentle but persistent lover wooing his beloved from her intellectual fortress. Her story is at once beautiful and compelling in its apparent lack of drama. I was gripped by her accounts of her intellectual debates and found myself on the edge of tears when she detailed how she “bought a ticket” (chapter 21) and finally laid down her arms.
And Christians can learn much from her mentor Josh. If her narrative is an apology for a certain kind of apologetics, then Josh is the example par excellence of how one goes about doing it. Throughout her intellectual journey, Josh consistently treated her with respect. He challenged her intellectually, yes, by asking questions and proffering new ideas for her to think about, but he never pushes her beyond where she was emotionally and intellectually ready. He never belittles her, never devalues her thoughts, and never, ever avoids difficult questions. One thing that I think all Christians can glean from her book is that in interacting with non-Christians, the most important thing we can do is to treat them with respect. This doesn’t mean agreeing with them all the time or avoiding tough issues. However, it does mean treating them as human beings worthy of dialogue rather than rants or diatribes.
While we did not end up in the same place theologically, we can come together on reason and imagination; God used mine to lead me to Reformed theology, hers to Catholicism. In other words, we can agree to disagree on where reason and imagination have led us, but the most powerful aspect of her story is precisely the integration of these two things. It is a powerful and compelling argument for the retrieval of not just the True and the Good, but also the Beautiful in Christian apologetics.
The book was also, for me, an argument for the production and enjoyment of Christian art and Christian fantasy that captures both the wonder and joy of life in Christ and also the tragedy and brokenness of the world this side of the Fall. Tolkien’s Lord of the Rings isn’t an allegory for Christian faith, but it is a presentation of how Christians can make sense of both the beauty and brokenness of the world we live in. That is the kind of Christian art I want to participate in and experience. She has recaptured for me a desire to dive into poetry again, specifically the poetry that she describes as having such a rich impact on her even when she rejected the Christian worldview. In sum, Ordway vividly presents the richness of what Christians can, with the help of the Holy Spirit, create and share with the world for our good and His glory.
Tags:
books | literature | art

Gretchen Ellis is a freelance writer and copy-editor. She has a master’s degree in Theology from Wheaton College and a master’s degree in Hebrew Bible from the University of Wisconsin-Madison. She also runs her own online crafting business out of her home. She currently lives in Madison with her husband Ryan, their two cats, and a house full of books. She is a lover of learning, tea, and deep conversations.

Arts, Books, and Media
By Ashley Hales
Reading Can Change the World

Ashley Hales invites us to consider reading as an act of social change in her review of Chris Smith's Reading for the Common Good.

In Focus
By Bethany Bowen-Wefuan
Reading Together: The Joy of a Graduate Student Reading Group

PhD student Bethany Bowen-Wefuan describes the powerful impact starting a reading group has had on her life and gives practical steps for starting your own.

Listen in on our conversation with priest and writer Tish Harrison Warren where we discuss human vulnerability, the nighttime prayer of Compline, and Tish’s upcoming book.