Listening for Understanding: Gender and Language

As I go into a particular office on campus every day, I see, tacked to the wall, a placard full of jokes about women’s endless talking. I know who tacked that placard on the wall — it’s a woman — but I’m always a little irked. The presence of that placard in a public space reminds me that these stereotypes — the chatterbox female going on about her feelings, the taciturn man who only wants to talk about facts — are still powerful. What’s interesting to me is how often those stereotypes lead to a “battle of the sexes” mentality: men and women feel mutually frustrated by what they see as the other gender’s irrationality or self-absorption. This happens in families, friendships, and in the workplace, but it doesn’t have to. Deborah Tannen’s book, You Just Don’t Understand: Men and Women in Conversation, is by now a classic both in linguistics and in the self-help genre. Tannen’s work can help us better love each other by helping us understand each other. 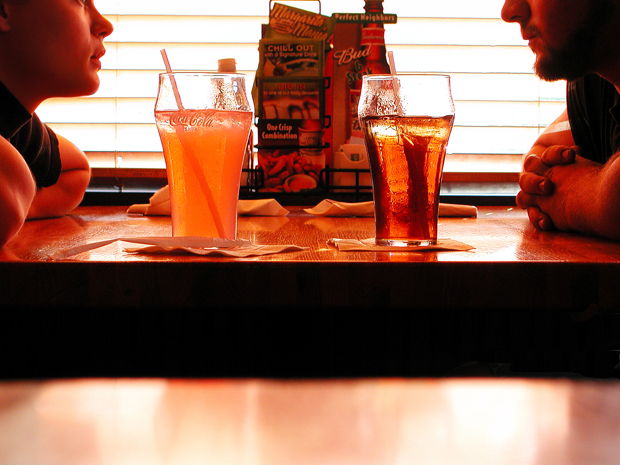 Tannen, a linguist, argues that men and women tend to use different strategies in conversation, and that this difference produces misunderstandings, sometimes very serious ones. Tannen distinguishes between the literal message of an utterance and its meta-message, the message it sends about the speaker’s relationship to his or her conversation partner. She argues that men and women often misunderstand each other’s intentions because they read different meta-messages into the same conversation.

According to Tannen, men are particularly aware of their status relative to the other speakers in the conversation, often trying to avoid seeming dependent or lesser. This, she says, is the source of the stereotype of the male driver who refuses to stop and ask for directions: asking for help might mean positioning himself in the conversation as inferior (“one-down” in sociolinguistic jargon). But it is also the reason why so many men feel comfortable seeking leadership positions and negotiating hierarchical workplaces. When men seek intimacy, she says, they tend to do so in ways that still preserve their sense of independence; their relationships tend to be held together by shared activities rather than shared talk.

Understanding this drive to preserve independence has helped me make sense of some of my students’ behaviors. I used to be totally bewildered by the occasional student who showed up in my office with a draft, listened to my comments, and then said nothing in response (other than a “yes, ma’am”) and left. He’d obviously made the effort to come to my office hours, and he needed the help — why on earth wasn’t he asking any questions? But I teach in the American South, where the words sir and ma’am aren’t just formalities but markers of respect. And invariably the students who fit this pattern were young men from small Southern towns, who showed other signs of being invested in a traditional Southern masculine identity. Now I remind myself that such students are caught in an uncomfortable place: they might be struggling with their own training to defer to my authority as a professor, to the point where they feel that any response other than agreement is a challenge to me and while they need help that they can't provide for themselves, they also wish to preserve a sense of their own independence and dignity. No dignity is lost in asking for help — it is the wise person who knows when help is needed — but these students don’t feel that.  This perception has changed how I relate to all students. I am especially careful now to angle my chair so that I’m not facing students  in a confrontational position; to ask what questions they have rather than if they have questions; and to express strong confidence that they will be able to improve their work. In other words, I try to use my authority to bolster their sense of self-respect. 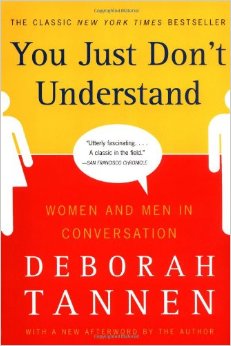 On the other hand, Tannen says, women tend to pursue feelings of intimacy and connectedness with their conversation partner, and are less interested in maintaining a superior status in conversations. Tannen argues that women perceive conversation as a means of building relationships, not just as an exchange of information. Women may spend more time talking about personal matters at work — not to waste time, but to build friendly working relationships with each other. And they are more willing to collaborate, to defer to each other, and to seek consensus in decision-making. This perception has helped me put a new value on casual conversations with colleagues, especially when I have a pile of urgent tasks to finish, papers to grade, etc. It has also helped me give myself permission not to engage in certain sorts of conversations at work: I no longer feel compelled to listen to someone else’s hour-long monologue, for instance, because it doesn’t actually build a collaborative relationship with that person.

Tannen’s arguments are a good bit more complex than I have presented here. The book is at its best when Tannen describes a conversation and then provides an analysis of the complex conversational moves that each speaker made. Some linguists have disputed Tannen’s claims because they sound too much like the traditional stereotypes about men and women. And even though she’s careful to emphasize that these behaviors comprise learned cultures, it would be easy to read her ideas as gender essentialism. But that’s not what she argues. Tannen is trying to show us that neither men nor women can be reduced to a single, simplistic set of characteristics, conversational or otherwise. Both men and women seek intimacy, professional success, and recognition, and both men and women speak from a mix of generous and selfish motivations. She wants us to understand that men and women, as categories, don’t come into the conversation with bad faith, but with differing assumptions about how to communicate. In Tannen’s view, most misunderstandings are the result of difference rather than of deficiency. And you don’t have to agree with all her arguments to see the benefit in thinking about status, intimacy, and self-awareness when entering into a conversation.

When my students read You Just Don’t Understand for my courses on gender and language, someone always comes into class the first day and says, “This explains so much!” And I feel the same way. To me, Tannen’s method itself is the most useful part of her book. When I think about meta-messages, I start to think more carefully about what other people might mean, and I also start to think about how I myself speak to others. My students report taking these steps after reading Tannen: they are more critical thinkers, more aware of gender stereotypes, but they also report having more compassion for the people they are speaking to who perpetuate these stereotypes. And here is the real usefulness of Tannen’s book, in my opinion. In You Just Don’t Understand, Tannen offers us a model of charitable interpretation — assuming good faith, assuming good intentions, reaching beyond our own frustration to see the other’s value and affirm the good in him or her.  In other words, this book offers us a method to help us love each other.

Elizabeth Harper is an assistant professor of English at Mercer University in Macon, Georgia. She is a medievalist, a feminist, a mother, and a gardener — not necessarily in that order.