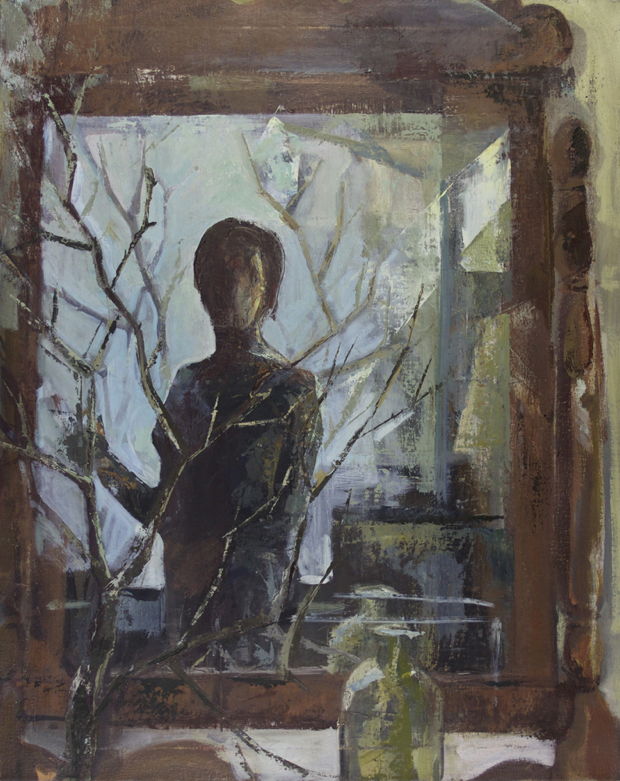 Advent is a time of waiting — waiting for “the fullness of time.” On earth we catch only a glimpse of God’s plan of salvation, corners of the glory and joy He has promised for us in Resurrection. We see, as it says in 1 Corinthians 13:12, “through a glass darkly.” That “glass” is the perfect image of God created in the Garden of Eden. With Eve’s decision to sin, that image became flawed, a tainted reflection of God’s perfection. Mary’s "yes" to God redeemed Eve’s “no” and with that “yes” she too was redeemed to become what Eve was meant to be — a perfect reflection of God. Mary, in the image of God, becomes both mirror and window — reflection of God’s perfection, and as such, a window into a redeemed reality.
The waiting, creative pose of the woman and the light “overshadowing” the figure from the window both allude to the representation of another story, a woman who watched attentively and met unexpected Truth in the presence of the mundane. The painting’s title — “Mirror of Grace” — alludes to a medieval hymn which elaborates upon different images and metaphors for the Virgin Mary and her role in the Incarnation of Jesus. She is traditionally seen as the “Immaculate Conception,” the perfect human “created in the image of God” just as Adam and Eve were in the garden. This is in contrast to Eve, who, though also created in the image of God, marred that perfection with her disobedience. Mary’s obedience reverses Eve’s disobedience and brings humanity into communion with God once more. As children of Eve, we have the hope through Christ to be like Mary, a perfect image of God: "Now we see through a glass darkly, then we will see face to face." (1 Corinthians 13:12) Through Christ we can see and become that “vision blest.”
Photo Credit: michellepaine.com
Mirror of Grace, Oil on Canvas, 30” x 24”, Private Collection
© Michelle Arnold Paine All Rights Reserved.

Michelle Arnold is a contemporary painter whose faith plays an integral part of her work. During the years she spent living and working in Italy for Gordon College’s study abroad program, she steeped herself in the Renaissance masters, the rhythms of the Catholic liturgy, and the intimacy and beauty of daily Italian life.

After her return from Italy she received at Post-Baccalaureate Certificate from the School of the Museum of Fine Arts, Boston, and went on to earn a Master of Fine Arts degree from University of New Hampshire.

She has taught in the Studio Arts department at several Boston-area colleges, but recently relocated from the Boston area to Ohio. In addition to numerous private collections across the US, her paintings can be found in the collection of the Valparaiso University Chapel, Rivier College, and Gordon College. She is represented by Sloane Merrill Gallery in Boston. Her work can be viewed and purchased at michellepaine.com.

Beth Bevis Gallick reflects on the holy moments she experiences in a temporary living situation that has become a home.

Every year, I look forward to Advent and Christmas with intentions of enjoying sweet times with family and friends, peaceful moments...