More than Enchanting: Breaking Through the Barriers to Influence Your World

Women seeking to develop their leadership potential would do well to pick up Jo Saxton’s book, More Than Enchanting: Breaking through Barriers to Influence Your World. The world needs more women leaders, especially if humans are called to bring more of God's kingdom on earth. Saxton argues that the “lack of investment in female leadership isn’t just personally frustrating and debilitating; it frustrates and debilitates the bigger cause to which Christians are called.” (p. 21-22) She writes to encourage women to step into leadership roles whether in the church, the home, or the marketplace, though she primarily concentrates on callings to leadership within the church. 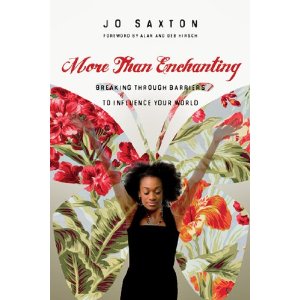 Saxton’s book parallels a larger conversation in our culture about the various roles of women. This parallel cultural conversation revolves mainly around two other female writers, Sheryl Sandberg and Anne-Marie Slaughter. Facebook’s COO Sheryl Sandberg’s recent book Lean In, currently number five on the New York Times bestseller’s list, challenges women to pro-actively pursue leadership roles in the work place. Anne-Marie Slaughter stirred up controversy with her article last year in The Atlantic, Why Women Still Can’t Have it All— which of course begs the question, what can women have? Saxton’s book partly answers that question, though she begins from a different starting point.

Let me say from the outset: please do not judge this book by its cover! Though the woman on the front cover is beautiful, I think most readers could do without the butterfly sporting flowers on its wings. Perhaps the point of the cover is to emphasize the spiritual transformation of women, but the butterfly is not needed to make the point.  This is not another fluffy feel-good book marketed to women by Christian book publishers and it is not in the genre of John Elderedge’s book Captivating.

Saxton starts out by taking a closer look at Proverbs 31. She tells the story of Emily May Butterfield — Aunt May — who was hugely influential in Saxton’s own life, having the marks of a Proverbs 31 woman. Despite the fact that Aunt May spent the better part of her life functionally illiterate — only learning to read and write in her 90s — she had fostered over one hundred children. She led by example and used her leadership skills to build up and strengthen others. Saxton gives credit to this woman who helped shape her own full life

In More Than Enchanting, Saxton chooses to skip the theological discussion of the place of women in leadership in the church and from the outset states:

“This is a book that recognizes that women already do lead.  It acknowledges that we have a huge influence in shaping society as mothers, lovers, spouses, friends, as professionals making significant decisions every day at work, as members of our local communities and yes, as church leaders.” (p. 22)

The author does not re-visit a rationale as to why women can be leaders as literally dozens of books ably cover that topic. Rather, Saxton uses the space of her 200-page book to offer Biblical, anecdotal, and practical advice as to how to thrive in leadership and influence our culture, families, and friends with the good news of Jesus. Saxton points people to Jesus and reminds us of our role in the Great Commission:

“We’re not merely a church building, event or program; we’re a body. We’re active, called to communicate and incarnate the message of the gospel. We’ve been commissioned to make disciples who would follow in Jesus’ footsteps. As Christian women, all that God has invested in us — our gifts, talents, passion and energy — is to be employed and deployed to see his kingdom come wherever we are.” (p. 17)

Essentially, this is a book on discipleship. Each chapter contains questions for further reflection or small group discussion. Audiences who would most benefit from this book are young adults in their 20s and 30s and perhaps even mature teenagers who wish to discern their place and call in the church.  Though this book is not written for men I do recommend it to male leaders as it may provide helpful insight into ministry to and with women.

Saxton offers real-life practical advice. She encourages women to connect with other women leaders and resist the urge to envy or compete with other women. She also stresses the need for solid friendships, healthy friendships with women leaders, networks of relationships, and mentor relationships. Saxton is refreshingly honest with her own struggles and failures in ministry. Her most helpful piece of advice, “don’t wait to be chosen; be proactive.” (p.125). Her caveat to this is to do so prayerfully, reflectively, and in the company of other women. Saxton doesn’t shy away from writing about sex, struggles, and temptations, and offers advice on how to navigate a man’s world.

On a personal level what struck me as a very interesting but undeveloped part of her book was in the introduction under the subheading, “One Momentous Night.” In four short paragraphs she describes a ministry event where she and a male leader issued a call for women to come forward to receive prayer for those who had experienced hurt, rejection, or frustration in the area of leadership in the church on account of their gender. (p. 18). She goes on to express her own surprise at the sheer number of women who came forward for prayer.  Saxton says this:

“It was unsettling to watch. Silent tears turned to stifled sobs, then for some the sobbing grew louder; for a few it turned to wailing.” (pp.18-19)

Saxton describes it as listening to a lament as many young women for the first time gave voice to their experience with the church. I found this short passage profound. The place for lament and healing for women deserves more attention and space than Saxton could give and is a subject worthy of its own book.

Saxton does not gloss over the challenges of leadership nor does she leave the reader without hope.  Throughout the book she offers encouragement and ways to continue to grow and develop as leaders.  Her book concludes with suggested resources for further reading.  I found More Than Enchanting to be a helpful resource and one that will I recommend to others as I continue the conversation about women in leadership.

Mary Amendolia earned her Master of Arts in Christian Spirituality from Heythrop College, University of London, with a focus on the visual arts and spiritual transformation.  She trained for ministry at Wycliffe Hall in Oxford, England, where she earned a Certificate in Christian Apologetics and an Oxford Diploma of Ministry.  Additionally, Mary holds a Bachelor of Arts in Art History in Italian Renaissance Art. Currently, Mary is an Associate with Coracle, an organization dedicated to spiritual formation and kingdom action. Mary speaks at retreats, enjoys international travel, learning about other cultures, reading, painting, being outdoors and all things Italian.

Debra Sulai reviews Jeffrey Salingo's recent book on the future of the university.

Poet Luci Shaw shares the delight of the creative process, "when that random pebble of an image discovers its true home."