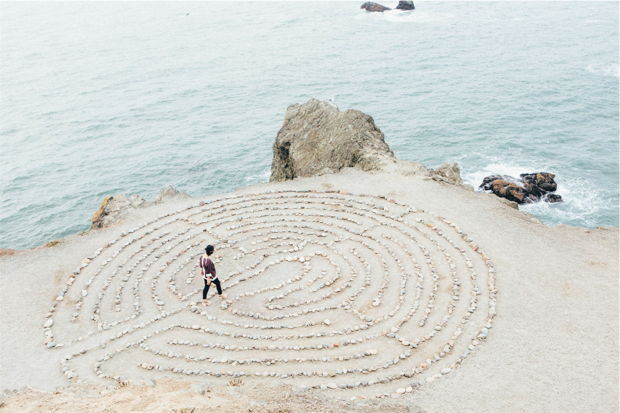 One of the great privileges of my life has been witnessing my younger sister’s journey of faith. She professed her faith to me when she was in her early twenties. I remember we were in the car, running errands on a warm fall afternoon, as she related her conversion experience. I blinked back tears and tried to play it cool even though I was sitting in the midst of a moment of eternal significance.

Later she would ask me to help her find a church. We had grown up sporadically attending churches, so with no solid framework of what makes a “good church” she expressed concern that she could end up joining a cult by accident. We talked over the different options of worship styles, preaching styles, small groups, and women’s ministries. We discussed what we had seen come out of our local big-box church and debated the pros and cons of smaller congregations. What would be a good fit for her personality? Where would she learn the most?

While I realized the importance of discipleship for my sister, at that time I was operating from a more cerebral, academic faith paradigm. I thought the most important thing for her early formation was to get her into a place where she could receive as much good information as possible, packaged in a way she could easily receive. Smith is quick to point out this common error — treating people as primarily thinking-things — as he sets the framework for the book. Instead, he makes the case that “we are not just static containers for ideas; we are dynamic creatures directed toward some end.” We are not foremost thinkers, but lovers motivated by a telos: the vision of the good life that has captured our imagination. Or you could say: we cannot be reduced to “brains-on-a-stick.”

Our hearts house our desires, not our heads. I’m sure we can all think of situations where this has played out in our lives — where we know what we should do but don’t act accordingly. I can study healthy exercise and eating habits and have all the right answers, but until my desire is kindled to pursue holistic health, the information alone will not move me from a sedentary lifestyle in which I am prone to overeating. However, once I catch a new vision of the good life — for me, a body that feels strong and capable — I can then begin to pursue new habits that will lead me to this end. Even if I know everything I should start doing, it is not the desire alone that gets me to my goal; it is the small, faithful decisions that will shape the outcome. 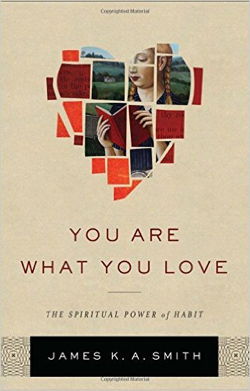 Smith draws out the importance of the connection between our vision of the good life and the formation of good moral habits: the small, faithful decisions that we’ve made so many times they have become reactions. Our vision of what we see as the good life will be what we pursue, even when we aren’t making conscious decisions to pursue it. Our telos is the chicken-wire frame on which we papier-mâché our conscious and subconscious decisions, giving our lives shape. But what if our telos, our deepest love, isn’t what we think it is?

Smith argues that “[t]he body of Christ is that unique community of practice whose members own up to the fact that we don’t always love what we say we do — that the ‘devices and desires’ of our hearts outstrip our best intentions. The practices of Christian worship are a tangible practiced, re-formative way to address this tension and gap.” These practices and rituals are named “liturgies.” These are what train our habits. They serve to reorient our loves viscerally, not cerebrally. They form the trajectory of our desires. Like practicing scales on the piano, these liturgies teach us how to naturally play the song we were made to play. We learn to love God through “embodied, communal practices that are ‘loaded’ with the gospel and indexed to God and his kingdom,” such as the sacraments and spiritual disciplines practiced in community.

Unfortunately, in our current climate of treating people as primarily thinkers instead of lovers, combined with our modern attempts to make church a “seeker-sensitive” music venue — trading sacramental orders of worship for secularly-charged forms — we have let go of these tangible, historic liturgies of Christian worship that would serve to (re)form us. In our desire to be more welcoming, we have diluted the narrative handed down to us of gathering, listening, communing, and sending. For example, if we skip a corporate time of confession because it feels formal, or even awkward, we water down the proclamation of forgiveness, which reorients us to the grace of God to cover all our sins of commission, omission, and complicity. Smith points out here that we also lose an opportunity to push back at the rival secular liturgy of “just believe in yourself” self-confidence, which teaches us a self-assertion that refuses grace. The weekly call to confession is designed to (re)form us.

Part of our struggle is to recognize when we’re being faced with a rival liturgy: “Our loves and imaginations are conscripted by all sorts of liturgies that are loaded with a vision of the good life. To be immersed in those ‘secular’ liturgies is to be habituated to long for what they promise.” And so, any spiritual formation we desire must be done intentionally and with regularity to counteract the secular liturgies we unknowingly absorb in the surrounding consumerist culture. It is when we begin to have eyes to see the formation taking place through these competing liturgies that we can begin to evaluate the messages being broadcast and consumed through our own Christian discipleship, worship, education, parenting, and vocation.

Smith spends time in each of these realms, encouraging us to see our world through the liturgical lens and to consider some practical examples of how to push back at the charged narratives which run through our experiences. For example, he has us consider what a liturgical paradigm could mean for higher education. No longer would a student view information gathering and dissemination as the telos, but instead must “consider the ultimate ends to which [her] work is going to be oriented. A Christian education can never be merely a mastery of a field of knowledge or technical skills; learning is embedded in a wider vision of who [she is] called to be and what God is calling the world to be.” Smith then leads us to answer the questions, “How does my learning fit in this Story?” and, “What practices will cultivate this ultimate orientation in me?”

When I was in my late teens I wound up worshipping in a more traditional, liturgical church by accident. Or maybe not an accident, but more as an unanticipated consequence of leaving my beloved evangelical church for my boyfriend’s Reformed church. Because we were talking of marriage, it seemed like the right thing to do. I had no idea what “Reformed” meant, but from first glance the people seemed nice and normal-enough, even if the hymnals and responsive readings felt stiff.

We have now been members of this congregation for about fifteen years. Our babies were all baptized here and recently began receiving communion — both sacramental rites which rehearse and retell the Story of God’s family to which they belong. It’s eventually where my new believer sister ended up, much to her chagrin, since she thought of this church as “lame.” “I feel like I’m supposed to be wearing a bonnet and carrying a basket with a prayer book,” she jokingly whispered to me during the music portion of the service on one of those first Sundays. This certainly wasn’t a comment on our relaxed California-casual dress code, but rather how the strange formality of the order of the service made her feel. It wasn’t a comfortable transition from being carried on the current of secular liturgies to being (literally) baptized into this sacred communion of saints.

I asked her recently how she now feels about the liturgies of our church family: responsive readings, a song of response after the sermon, infant baptism, public professions of faith, et al. She said that without them she thinks she would have eventually “outgrown” church. After finishing You Are What You Love, I’m inclined to agree. We never outgrow our need for practice. If we, who have been grafted in, are to grow toward producing good fruit on this vine — to attain this ultimate Christian vision of the good life — we must submit to these cultivating liturgies to do their important work in shaping us. She is being (re)formed here, along with all the rest of us, week by week.

Aleah Marsden is a writer, speaker, and social media and communications director who is passionate about seeing women walk into all the plans God has for them. Her writing can be found in publications like Christianity Today and Books & Culture, as well as a handful of devotionals in the NIV Bible for Women: Fresh Insights for Thriving in Today’s World (Zondervan, 2015). Connect with her at AleahMarsden.com, Facebook, Instagram, or Twitter.