Arts, Books, and Media
By Karen Swallow Prior

Books should be “promiscuously read.”

These are the words of John Milton in his famous 1644, anti-censorship tract, Areopagitica. In the midst of the English Civil Wars, when the price for a wrongheaded idea might well be one’s head, Milton argued passionately in this treatise that the best way to counteract falsehood is not by suppressing it, but by countering it with truth. The essence of Milton’s argument is that truth is stronger than falsehood; falsehood prevails through the suppression of countering ideas, but truth triumphs in a free and open exchange that allows truth to shine. 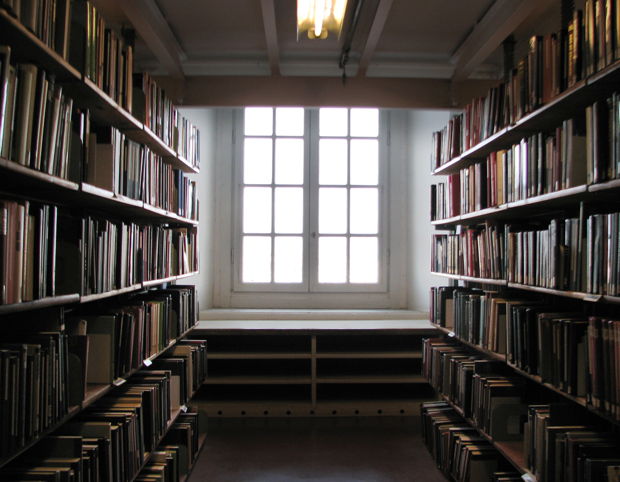 I learned about John Milton and his most famous work, Paradise Lost, in college, but I wasn’t introduced to Areopagitica until graduate school. Oddly enough, even then it wasn’t in a class but through a remarkable series of events.

I had taken a couple of classes with a professor who seemed to me to be one of the most liberal, perverse, and intellectually intimidating people I had ever known. I read my first (and last) work of pornography as an assignment in his class (eighteenth-century pornography, but pornography nonetheless).

It seemed as if this professor was always saying the wickedest things, and I could never tell if he was serious or if he just thought that being provocative was part of a professor’s job within one of the most liberal departments in a liberal state university.

One evening, while conducting a make-up class in his home, the professor regaled the grad students with tales of shocking his undergraduates in a course he taught on the First Amendment. One of his favorite tactics was to show them the “homoerotic” photographs of the acclaimed and controversial photographer Robert Mapplethorpe. When the professor mockingly described the indignation of “some redneck born again” student, I called him out. In front of everyone. I didn’t think it likely that it was only the “born again” undergrads that were queasy about seeing photographs of men with various implements plunged into their bodily orifices.

“Surely, you’re not stereotyping?” I asked with as sophisticated a tone of sarcasm as I could muster. He was my professor, after all. I tried to sound cool and cynical and disinterested, but my insides were bubbling up. I had been in graduate school long enough to have sensed less-than-warm attitudes by many toward religious belief in general and Christianity in particular. I had not tried to hide my faith, but I had understood that it was best not to wear it on my sleeve either. I certainly had never confronted a professor about the bias I had seen both in and out of the classroom. Perhaps meeting in the professor’s home, in the relaxed comfort of the living room where we were casually circled, I felt a freedom I’m sure I’d have never felt in the classroom.

The room was dimly lit and I was grateful for this as I felt my face crimson. I don’t remember exactly my professor’s or my fellow students’ immediate reaction, but from the professor I think it was something along the lines of a terse admission and apology, followed by a quick change of subject. What followed once the class was over is seared in my memory. On my way out, the professor stopped me at the door and offered a genuine, more profuse apology for what he acknowledged was a serious transgression against the liberal values he espoused. I had to respect him for both striving to be consistent with his own profession for tolerance and for admitting failure when he wasn’t. All the other students had left, and we spoke for about twenty minutes. A new understanding and mutual respect between us took root.

From this day on, my professor would often ask my view of topics in class, explaining to the others, respectfully, that he was particularly seeking my view as a Christian, thus paying more than lip service (unlike many of his peers) to the diversity and tolerance he valued. But many times my professor would talk to me more after class, sitting in the stifling space of his tiny office. We discussed Christianity and Christians, liberalism and liberals, conservatism and conservatives, free speech and John Milton — and the surprising role that a conservative, Puritan Christian had in developing one of the most cherished cornerstones of American freedom.

While Milton wrote Areopagitica in a context far removed both chronologically and politically from the U.S. Constitution, his argument against the licensing orders of the seventeenth-century English government was instrumental in the thinking that shaped the First Amendment. Milton’s stance is even more significant when one considers that he was arguing against the policies of his own Puritan faction. Milton demonstrated the universal power of truth not only in the content of his treatise, but also in the very act of countering his fellow Christians: by standing for truth even against his own party, Milton embodied the very power of truth. Milton thus exemplifies the person of integrity whose allegiance is to truth rather than comfort, to doctrine rather than political or social expediency. Like my professor turned out to be.

Even outside of Milton’s context as a seventeenth-century Puritan, his argument for promiscuous reading is instructive, because such an approach is still both the means and the mark of the intellectually- and spiritually-mature person.

Today the word promiscuous is usually associated with sexual behavior, but this is a more recent usage, one that comes from the word’s actual meaning —indiscriminate mixing. It’s easy to see the sexual application of the word from this definition but instructive to think about in the context of reading. It’s surprising, I think, to realize that pious and scholarly Milton is actually arguing for indiscriminate, disorderly reading. And lots of it. In Milton’s day people had more fears surrounding promiscuous reading than promiscuous sex (the latter being rarer), so Milton had quite the challenge ahead of him.

In making his argument, as a churchman speaking to fellow churchmen, Milton cites the biblical examples of Moses, Daniel, and Paul, who were all steeped in the writings of their surrounding pagan cultures. Milton also invokes a leader of the third-century church who asserted that God commanded him in a vision, “Read any books whatever come into your hands, for you are sufficient both to judge aright and to examine each matter.” Such advice mirrors the Pauline suggestion to “test all things and hold fast to that which is good.”  Milton puts it most profoundly when he says,

Well knows he who uses to consider, that our faith and knowledge thrives by exercise, as well as our limbs and complexion. Truth is compared in Scripture to a streaming fountain; if her waters flow not in a perpetual progression, they sicken into a muddy pool of conformity and tradition. A man may be a heretic in the truth; and if he believe things only because his pastor says so, or the Assembly so determines, without knowing other reason, though his belief be true, yet the very truth he holds becomes his heresy.

In other words, the power of truth lies not in abstract propositions but in the understanding and willful application of truth by living, breathing persons which can occur only in the context of liberty.

Indeed, for Milton, this necessary freedom is seen in the character of God. For God is not, Milton argues, one to “captivate” his children “under a perpetual childhood of prescription,”  but rather, God expects us to exercise reason, wisdom, and virtue. “What wisdom can there be to choose... without knowledge of evil?” asks Milton. What praise for “a fugitive and cloistered virtue, unexercised and unbreathed, that never sallies out and sees his adversary, but slinks out of the race where that immortal garland is to be run for, not without dust and heat.” Those “who imagine to remove sin by removing the matter of sin” have a poor understanding of human nature and the human condition, argues Milton.

The “best books,” Milton argues, “to a naughty mind are not unappliable to occasions of evil.” On the other hand, “bad books,” Milton continues, “to a discreet and judicious reader serve in many respects to discover, to confute, to forewarn, to illustrate.”  How aptly an analogy might be drawn between the way Milton depicts God demanding of his children the exercise of reason, wisdom, and virtue and parents who might draw out the same in their children through liberal reading and testing of ideas through books.

But beyond the practical uses of truth in exercising virtue and cultivating maturity, Milton waxes most eloquent when he describes the very nature of truth itself:

For who knows not that Truth is strong, next to the Almighty? She needs no policies, nor stratagems, nor licensings to make her victorious; those are the shifts and the defences that error uses against her power. Give her but room, and do not bind her when she sleeps... And though all the winds of doctrine were let loose to play upon the earth, so Truth be in the field, we do injuriously, by licensing and prohibiting, to misdoubt her strength.

Let her and Falsehood grapple; who ever knew Truth put to the worse, in a free and open encounter? Her confuting is the best and surest suppressing.

There is perhaps no better evidence to me of the power of Truth than what I read one day in a note to me from this professor who had introduced me to Milton’s Areopagitica. He’d long left my university and his wife, and gone with a new wife to a new university in New York City. The brief message said he wasn’t quite sure how it had happened — but that he had come to believe in the God of Milton’s Areopagitica — and my God.

So this was my introduction to Areopagitica and, more importantly, the idea that the God I had been raised to believe in was not a God of record burning and book blotting, but a God of freedom. “You will know the truth, and the truth will set you free.” I had heard this my whole life. Now I saw it to be so.

And I felt utterly liberated.

This passage is excerpted from chapter 1 of Prior’s literary and spiritual memoir, Booked: Literature in the Soul of Me, where you can find the complete story, as well as the footnotes for the material included here.