The Question of Extra Sauce: Dealing with Expectations in a Marriage 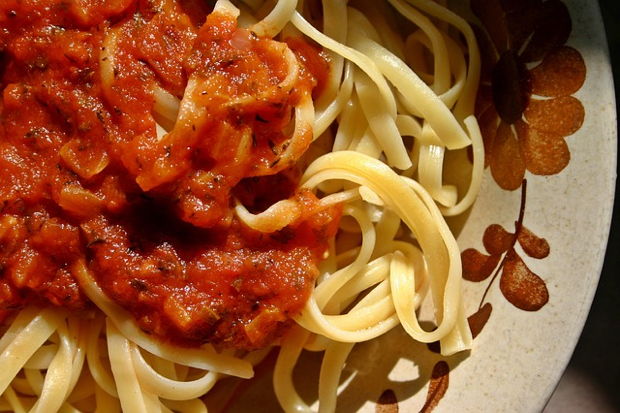 It’s November and my husband Christopher and I have made it through the first six months of marriage. The many storms predicted by our well-meaning friends have blown north of us. We successfully dodge the “Where do we spend our first holiday?” conflict with the flip of a coin. It’s heads, so we decide to drive five hours west to his home in central New York and disappoint my parents this year.

From a sociologist’s perspective, our two families of origin are more similar than not. We both hail from white, working-class communities, our fathers went off to the Korean War, our mothers mostly stayed at home, and we each have two siblings. But if you peeled back the veneer, you would notice significant differences, especially if you happened to stop in during dinnertime.

In my northern European household, meals were civilized affairs. We sat at the kitchen table 357 nights a year. The dining room table was reserved for major holidays, birthdays, and 1000-piece jigsaw puzzles. We never raised our voices or interrupted one another and always valued the quality of food over quantity. (Notice any moralizing in that sentence?) In Christopher’s Italian American home, life centered around one of five strategically placed tables. The question wasn’t if you would sit at the table; it was which one. To this day, his parents’ home has a table in the kitchen, dining room, basement, screened porch, and on the back deck. The table holds epic symbolism in the Greco household.

During our first Thanksgiving together, as soon as we claimed a spot at the table (the one in the dining room), I began to realize just how different our families were. There was twice as much food as we needed, including lime Jell-O and canned green beans submerged in a thick, gray sauce. The turkey was ceremoniously placed front and center, and then his mother brought out two huge trays of lasagna. With extra sauce and meatballs. For Thanksgiving.

After a prayer, the curtain went up and the opera began. Unlike at my home, there was no turn-taking or insightful follow-up questions. One person simply started talking and then another layered their thoughts on top — but not before turning up the volume. Then a third and fourth jumped in, making it impossible to really listen to anyone — something I eventually learned was not a priority. I’ve never been a fan of opera and even less so when I’m thrust into it without an opportunity to rehearse my lines. This experience helped me better understand Christopher, but I was not able to extrapolate his genetically coded mealtime expectations until we had a substantial fight not long after.

At our inaugural dinner party, we invited three couples over. Unlike Christopher’s family of origin, we had only one table that was woefully inadequate for eight adults. We made do. The conversation was lively and the food excellent. Everyone seemed to enjoy the evening — except Christopher, who made several less-than-affirming comments about my culinary efforts.

This same scenario played out multiple times before I pointedly inquired, “Why are you so critical of how I prepare meals for guests?” He shot back, “Because you don’t cook enough food and you never put out extra sauce when you make pasta!” Want to guess how our evening played out? That fight opened our eyes to a shocking reality: our family cultures had so deeply shaped our preferences, biases, and beliefs that we each reflexively judged anything different as wrong. This discovery allowed us to start tracing other marital challenges directly back to our formative years.

By normalizing our own family’s quirks and customs and concluding that our version of reality was morally superior, we had become ethnocentrists. This term describes a tendency to assume the inherent superiority of one’s own culture or ethnicity. I was guilty of ethnocentrism when I harshly evaluated his family’s Thanksgiving traditions. He was guilty of ethnocentrism when he judged me as incompetent simply because I didn’t put extra marinara sauce on the table. (Who knew?)

Like us, many of you may have ended up with overweight luggage as you packed for your honeymoon because you unknowingly crammed the suitcase full of culturally bound preferences and historic wounds. If we lack awareness regarding our ethnocentrism and our scars, we tend to become oppositional and needlessly criticize and judge one another.

These wounds, preferences, and internalized values not only inform our beliefs and actions, but they also become the foundation for many of our expectations. As we enter into marriage, we have dozens of unspoken expectations for the small, seemingly incidental details of life together (e.g., who cleans the bathroom?) as well as the major, significant components of life (e.g., who sacrifices their career to care for a sick child or aging parent?). Sometimes we’re not even aware of our expectations until others fail to meet them. Sometimes expectations emanate out of a wound, which makes it more difficult for us to identify the expectation, let alone discern what drives it.

In order to make progress in these areas, we need to pursue healing for our historic wounds, repent of any moralizing, and commit to honor each other’s traditions. We will then react less and eventually be able to create reality-based expectations. In our marriage, such choices have resulted in tangible and welcome changes. When we have company, I try to serve more food than I know we need because I want to validate rather than dismiss Christopher’s traditions. And sometimes, I even remember to put extra sauce on the table.