I sat a few nights ago in a cavernous Congregational church in Madison while the Bach musicians rehearsed.  Unable to attend their concert, I came instead to the dress rehearsal.  A good friend is the principal violinist and I hate to miss any opportunity to hear her play.  My husband was a true groupie, attending every concert of hers when he was in town.  When he passed away, I dreamt he gave her a golden carburetor before he died.  Where did that come from? A friend suggested that as Pete was an engineer, perhaps the golden carburetor was a symbol, at least in my mind, of his craft that he was offering to her as a thank-you for the gift of her craft over the years. (And for that matter, how did I recognize a carburetor?  I wouldn’t in waking life!) 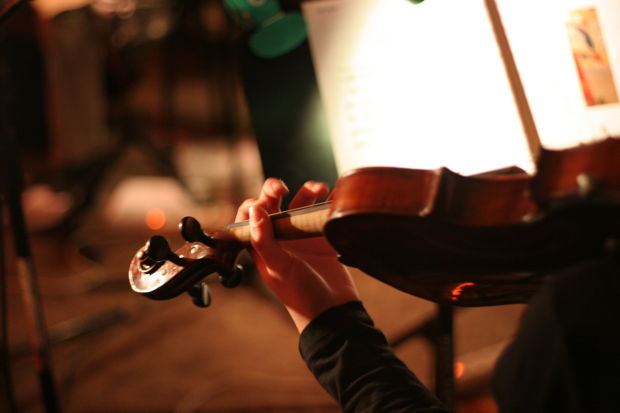 I sat in the balcony, the lone spectator for the evening.  I might have considered it a private concert except the musicians were oblivious to my presence.  As I sat awash in music — Corelli, Bach, Handel — tears came more than once.  The pure clear voice of the soprano and that of the contra tenor, even in German, moved me.

Why tears?  For one thing, I’ve been over-the-top-busy — I’m sure many of you can relate.  The holiday season comes with all the expectations of gatherings, decorating, baking, gifts and greetings, besides end-of-the-semester responsibilities and regular life and work to accomplish.  And then some struggles of dear family members and friends. How do I fit it all in?  Not just a woman’s dilemma, but certainly a dilemma for many women — how do I care for so many and for so much with the limited resources I have?

But as the musicians rehearsed, ending their practice with selections from Handel’s Messiah, I heard the offer of rest:

His yoke is easy, and his burden is light.(from Matthew 11:30) repeated over and over, and then:

If God be for us, who can be against us?  Who shall lay anything to the charge of God’s elect? It is God that justifieth.  Who is he that condemneth? It is Christ that died, yea rather, that is risen again, who is at the right hand of God, who makes intercession for us.(from Romans 8:31-34)

What a gift of rest this evening.  And the offer of the love of Christ giving peace and joy in this season.

How do you cope with the demands of end-of-the semester and the holidays?  Where have you found rest?
Tags:
anxiety, fear & stress | advent | work-life balance

Kami Rice describes her own struggles with fear, reflecting on the richness that comes with embracing risk.

Reflections
By Sharon Gartland
How Does Your Garden Grow?

Sharon Gartland recognizes the need for a master gardener to tend her flourishing, but sometimes unruly life.

Blog
By Andrea E.
A Scientist Looks at Imposter Syndrome

“You could be doing more, should be doing better, and really, what does that recent failed experiment say about you as a scientist?” That nagging little voice is colloquially known as imposter syndrome...

Dear Mentor: How do you deal with the stresses of the academy?

Dear Mentor: Are there unique ways for a Christ-follower to deal with stress?