Do nothing out of selfish ambition or vain conceit. Rather, in humility value others above yourselves.

The bouquet of shiny red and blue stars jostled each other for position against the car’s soft tan ceiling. The squeak of plastic rubbing plastic made me think about the community that can be nourished by the simple act of buying helium balloons for a friend. 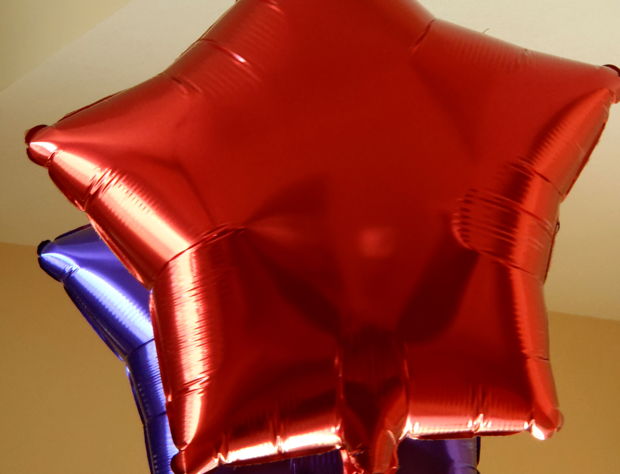 It was Monday, and of course Mondays can be a hard start to the work week. I climbed into our green Ford F150 truck with the mission of celebrating a friend’s success by taking her this floating gift. I was to be on her radio show this morning at 9:30, a monthly interview between us that has been a joy to me for five years now.

I got to the first store early, about 8:10, and the first thing I noticed was that the young woman at the cash register looked tired already and as if she’d rather not help anyone that day.

Instead of giving in to my natural reaction of becoming impatient, I allowed myself to look at her and wonder about the artsy tattoo on her forearm, her world-weary brown eyes, and her long, straight hair dyed blond. Why that swirling tattoo in black? What gave her vision sorrow? Does she dye her hair herself, as I do, or does she go to someone?

Questioning what her life is like and seeing in her slumped shoulders her hesitation about showing up for work that morning, I filled the uneasy silence — I hoped in a friendly way — by nattering on with seeming aimlessness and much good cheer about my friend, for whom I wanted the helium balloons: “Getting these for Nelle Reagan. Just inducted into the Georgia Radio Hall of Fame, Saturday, in Atlanta . . . at the Hilton. Very deserving. It’ll make her day to get a bouquet of balloons to celebrate.”

No response. I let that no-response breathe. I accepted it. I smiled. I waited as she texted.

“Just a sec,” she said with no visible emotion. “I just texted Michelle about your balloons. She’s in the back. You can just walk around if you want till she gets them done.”

So I wandered for a minute or so. Then she tracked me down, “I’m so sorry but we’re out of helium.” She seemed so surprised when I said, “No problem. I’ll just go look elsewhere.”

Then she talked with me for five minutes to determine the closest store that would have helium.

In fact, we had become such good acquaintances by the time I left the store that I thought what an opportunity it was that they were out of helium; otherwise we would not even have chatted much. I prayed that I will more and more see how when things don’t go smoothly they can contain hidden blessings.

I also prayed that I see each encounter with a person as holy ground.

My Georgia Radio Hall of Famer friend Nelle Reagan does just that. She started in broadcasting by being open to the unknown and by treating each person with respect, because one day a man from WPLK in Rockmart visited her family’s business on a sales call, heard her remarkable voice, and said she’d be great in radio. That was fifty-plus years ago. Since 1967 she’s been in Rome, Georgia, and currently hosts “Talk of the Town” on WRGA 1470 AM.

Through radio broadcasting, Nelle likes to say, she’s been able to pursue a career in public service. In other words, if the Chamber of Commerce is hosting a Business Expo, representatives come on the air with Nelle; if a local domestic violence shelter is opening a thrift store, someone from that store comes on the air with Nelle; and if there’s any sort of event happening in town, Nelle is sure to be there under a tent in any kind of weather, making sure everyone hears about it and comes.

Her life exemplifies the wisdom I first heard from a nun, who told me, “Long after people have forgotten what you did for them or what you said to them, they’ll remember how you made them feel.” Anyone who comes on the air with Nelle feels good before, during, and after the broadcast.

Why? Nelle has learned how to make space in her soul for listening to others and for being genuinely interested in the person with whom she’s conversing, and she appreciates the smallest gestures of kindness, like star-shaped helium balloons. Couple these talents with a good sense of humor, an extraordinary ability to create on-air conversations, and a wicked gift for making strawberry cakes, and you see how Nelle is someone who nurtures community on a daily basis.

I pray to be that way also, one person at a time.

In Focus
By Sharon Gartland
Being a Good Brother: Protecting Your Sister

Good brothers stand up for their sisters. Sharon Gartland gives examples from her own family and calls for similar support from brothers in Christ.

Reflections
By Ann Boyd
Why I Marched

Ann Boyd reflects on how raising daughters spurred her on to join in the Women’s March on Chicago.

What can an older woman and keeper of chickens offer to some of the brightest women on campus?