Confessions of a “just a…”

I have had the conversation hundreds of times. A fellow academic asks me what my field is and then follows up with the inevitable question: “Are you faculty?” Off campus, the question takes a slightly different shape, generally something like, “You’re a professor, aren’t you?” 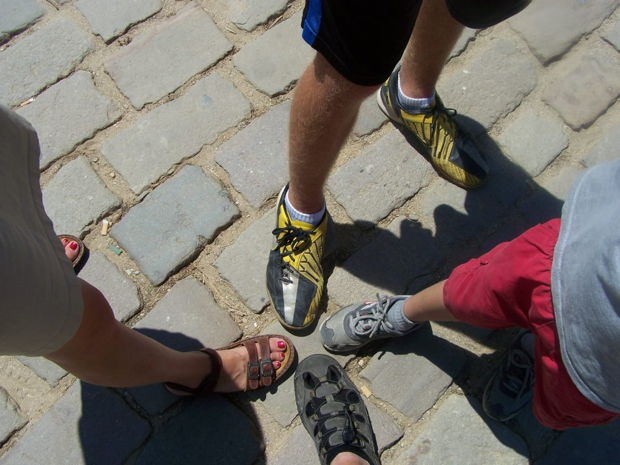 Portrait of my family on the streets of Barcelona.

I began graduate school on a clear career path toward a tenure-track academic position, preferably with research opportunities. As I progressed in graduate school, I found myself facing not only a changing job market hamstrung by hiring freezing and crushing budget cuts, but also, and perhaps more importantly,  changing life circumstances: aging parents who needed care, children who were well integrated in their respective schools, and a spouse established in a stable, rewarding job. Eventually it became clear that relocating our family for me to take a tenure-track job was not worth the cost to the rest of our lives.

Yet, I was one of the lucky ones — just when there was no hope of renewing my post-doc, a job with the Division of Continuing Studies opened up in my university. I was able to maintain affiliation with a major research university and continue to work in my field, albeit in a very different way. I was still an academic in higher education, but no longer paid to do scholarship and definitely not on a tenure track towards a professorship, and I could still not answer yes to the professor question. I worked at a university, but I was still “just a....”

A few months into my new position, I visited a relative’s church and was once again erroneously introduced as a professor of Spanish. I dutifully corrected the introduction with my tried-and-true strategy: “No, actually, I am just a....” A godly woman pulled me aside and kindly told me that it was time that I stopped saying I was “just a....” “You’re not ‘just a’ anything,” she told me. “You are God’s child, and called to do his work. You must embrace where God has put you, and stop apologizing for it.” I was convicted by her words, but also a bit offended. She did not understand the hierarchical world in which I lived. After all, she was not an academic.

The reality is that throughout much of my academic career, I was mostly okay with my just-a status. For many years, I was just a graduate student, which was a lowly life, but it allowed me the flexibility to be close to my parents during my father’s last year of life, to be with my kids when they got a fever, and even to travel internationally to do field research and attend conferences, sometimes with the entire family in tow. I was "just a" grad student, but privileged in many ways, and there was the hope that all of this hard work would open the door for something amazing.

Then the weight of the ordinary routine of being academic staff set in. A faculty associate position is the end of the line. There is nowhere to go. The hope that I wouldn’t be “just a” forever was gone. I hung my head a bit lower as I continued to answer, “I’m just a....”

The story in the church happened a couple of years ago, and while I say “just a” less than I used to, I still say it, but I have begun to pray over why I can’t get it out of my vocabulary. The problem, God is slowly teaching me, is not academia with all of its hierarchies. The problem is not the system that produces more PhD’s than jobs or university leadership that would rather hire adjuncts and academic staff than faculty. Nor is the problem an altered social structure where academics no longer can count on a stay-at-home spouse who allows them geographic mobility. No, the problem is sin. Not sin out in the world, but sin within me: pride and envy and a failure to find my identity in Christ.

I know I am God’s child, but I have failed to grasp its power. I am not just another child of God — I am a co-heir with Christ (Romans 8:17)! There are no hierarchies in this family, no lesser positions for those who arrived at the party during an economic downturn or with too many responsibilities to play the game of academia as if there were nothing else to do. Yet, like the crowds that welcomed Jesus to Jerusalem in Luke 19, I have waited for God to usher in the life I wanted and been disappointed when he offers me his kingdom instead. I have mourned my own loss more than praising him for the victory over darkness that he brings closer every day.

I am slowing learning that my just-a status is part of God’s mercy. He has not allowed me to wrap up my worth and identity in a great academic status. I will face other temptations, but not those. He has given me a chance to think intentionally about what success means and what standards I will measure it by. Little by little, I am learning to say that I am fully and miraculously God’s child and that is enough.

Julie M. Dahl is a wife and mother of two wonderful boys. She directs the Spanish Language Program for the Division of Continuing Studies at University of Wisconsin-Madison and has a passion for all things related to Spanish- and Portuguese-speaking cultures.

Reflections
By Jen Pollock Michel
There’s No Place Like Home

Jen Pollock Michel describes her longing for home and centrality of this longing in the story of our faith.

A professor of the history of Christianity learns to tell the truth about the giants of the faith and about herself.