A couple of weeks into Advent, I realized that our best-laid plans for living into the season were for naught. Though we had our Advent wreath on the dining room table with a short devotional guide nearby, we ate on the go more than I’d like to admit. The Advent calendar, taped to the inside of the front door so we wouldn’t miss it, went unopened.

It wasn’t so much that Christmas stress was invading Advent — my observance wasn’t drowned out by shopping, decorating, or baking. My problem was one of competing calendars: The rhythms of the academic calendar were getting in the way.

As a writing instructor, I had many grading deadlines during Advent. Students wanted more of my attention as final deadlines neared. I myself had pressing writing commitments to submit. In addition, my school-aged kids, nearing their own academic break, needed more of my time and attention for special programs and projects. 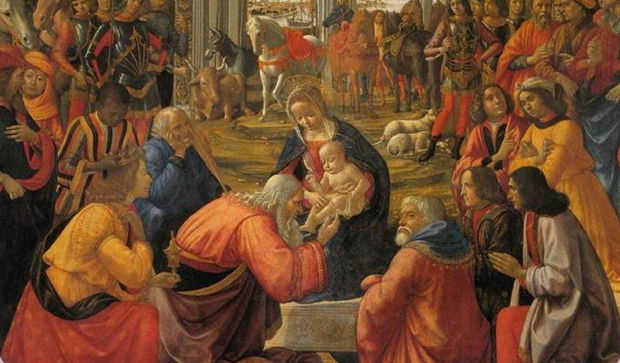 The Adoration of the Magi by Domenico Ghirlandaio, 1487

It’s not only the academic calendar that competes with the liturgical one: the annual calendar does as well. The end of a calendar year brings fundraising and administrative work to the fore, especially for those of us in the nonprofit world. A confluence of calendar transitions seems to fight against my own intentions.

So far, this sounds like a description of #thestruggleisreal, a hashtag similar in tone to #firstworldproblems. The struggle is real, but can I do more than complain about it?

How might I live into all of these calendars at once? A new calendar year is a time to reflect on the previous one and resolve to change. Most schools and universities will begin classes again sometime in January. And sandwiched right in the middle is Epiphany.

Epiphany means “revelation” or “manifestation” because it emphasizes God’s glory revealed in Jesus Christ. It’s a time to remember the magi who traveled from afar to worship Jesus, the king of the Jews. They remind us that the good news of Jesus’s incarnation is for all peoples, both Jews and Gentiles. This narrative provides a glimpse of those “latter days” described in Isaiah and Micah when all nations will journey to worship God. In Christ, there are no longer barriers between Jews and Gentiles. Indeed, the Gospel breaks down many barriers: uniting rich and poor, young and old, male and female, black and white.

Instead of viewing 2015, the spring semester, and Epiphany in conflict, let’s grab onto the new year and new academic term to live into Epiphany and enact its message. We’ve welcomed Christ, the light of the world, at Christmas, and Epiphany calls us to share the light with others in response to the gift of Christ’s Incarnation.

This Epiphany, I’m praying that God will give me new relationships more reflective of the glorious and diverse kingdom of God. To help me prepare, I’m reading Disunity in Christ and Being White with a friend, asking God how I might participate in breaking down barriers that still remain today.

How is God nudging you to live into Epiphany this year?

What gifts do we really want? Kurt Bullis shares a story of the transition from clarity to maturity.

Blog
By Ann Boyd
Advent in the Wake of the Election

I started listening to Christmas music early this year. We usually adhere to a strict no-Christmas-music-before-Thanksgiving rule, but my need for comfort was so intense that I felt the call to stray from our usual practice the week before Thanksgiving...

Podcasts
By Ann Boyd
Advent at The Well: Incarnation

Pour a cup of cocoa and join us for the final episode in our four-part Advent meditation series on the podcast, this one focusing on the Incarnation.

In Focus
By Anna Moseley Gissing
An Imperfect Calling
Anna Gissing shares insights on calling in light of the circumstances that inspire and define her own vocation.
Login