Even Still, Fear Not

I am a mother who catastrophizes. I walk into a room and, without conscious effort, notice five ways that my busy one-year-old could injure herself in it. My daughter gets a cough, and I imagine holding her hand in the hospital. There are storms predicted, and I worry about tornadoes. Ever since I became a mom, my imagination zooms to the horrifying faster than my reason can tackle it. And when my own catastrophizing instinct collides with the catastrophizing industrial complex that is the Internet and much of the American media, the result is — well, catastrophic. 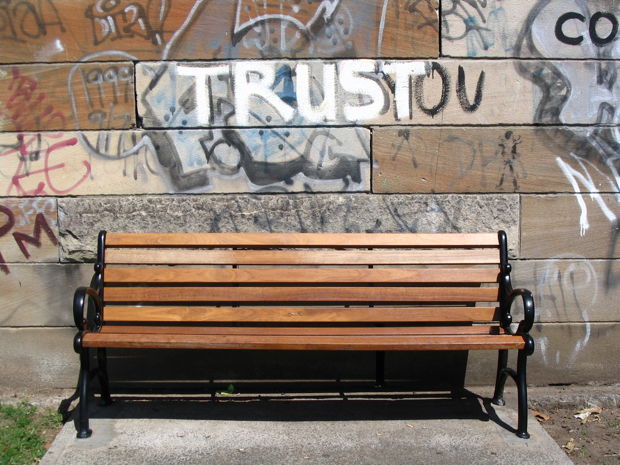 A quick scroll through my news queue or Facebook page and we have story after story of not only a rising Ebola epidemic but terrorist threats, religious persecution, crime, cancer, car accidents. For fear-addicts like me, the Internet is an open bar with free shots of anxiety. And I come back again and again, long after I’ve had way too many.

And yet, one of the most repeated phrases in Scripture, in virtually every conceivable situation, time and time again, is “Do not be afraid.” It’s loud and clear: we are to surrender our disordered fear to God; we are to be a people in whom love has driven out fear.

I was reflecting on this as I scrolled though news this week. And I caught myself, for a ridiculous split second, trying to justify my fear, thinking that it was easier for those first-century followers of Jesus to be not afraid, that it’s harder and scarier for me. I mean, I have the Internet. And then, I laughed. It was like catching my reflection out of the corner of my eye, an awakening moment, and I realized that I was grasping at ways — any way — to explain away my fear habit. I was looking for a way to pass it off as understandable, even honorable.

The followers of Jesus — for whom life was hard and short, who faced political upheaval, intense persecution, leprosy, disease, complications in childbirth, poverty, storms, shipwrecks, oppression, and uncertainty — had plenty of reason to fear and yet into that moment of history Jesus simply commanded, “Do not be anxious.” It was a counter-cultural message when it was uttered in Scripture and it is a counter-cultural message today. And it remains an essential part of discipleship.

In Rodney Stark’s The Rise of Christianity, he devotes a chapter to a period in second-century Rome when the city was gripped in fear. Two waves of a very deadly epidemic swept through the city, and in the midst of this, our Christian ancestors responded with almost unimaginable bravery. Stark quotes an early bishop who wrote in a letter that as the pagan city reacted in fear, “the best of our brothers...a number of presbyters, deacons, and laymen” lost their lives tending the sick:

Heedless of danger, they took charge of the sick, attending to their every need and ministering to them in Christ, and with them departed this life serenely...drawing on themselves the sickness of their neighbors and cheerfully accepting their pains.

These early Christians amazed the culture around them by their fearlessness and hope in the resurrection. I don’t want to “tsk, tsk” our lack of faith compared to these believers so much as I want to ask if we even have a vision of being this kind of alternative, brave people anymore. Do Christians in America remember that fear is an enemy and not a friend? Is fear utterly normalized in the church — the water we swim in — so much so that we have simply forgotten the call to be not afraid? Are we so accustomed to fear as a leading emotion in our culture that it has almost become a virtue — to not be afraid is somehow regarded not as faithfulness but as naiveté or unpreparedness?

There was alarm in Christian circles about a recent billboard in Times Square that advertised a porn site. The fact that such a crass ad would be shamelessly displayed in giant letters in the middle of Manhattan with such a sense of normalcy signaled to many that pornography has become utterly mainstream and culturally acceptable. Yet believers who would balk at this normalizing of sexual disorder indulge just as publicly, just as unashamedly, in disordered fear. There are particular media personalities, websites, and news outlets that so frequently trade in scare tactics and misinformation that it would not be inaccurate to call them pornographers of fear, exploiting our good and natural desires for security and peace as certainly as pornography exploits the desire for connection and love. And yet, we indulge our fears with abandon.

I am not saying that we ought to hide our fear, stuff it down, and will it away. I am however saying that feeding and sheltering and clinging to our fear, that living life around fear, and excusing a habit of fear is incompatible with a life of faithful discipleship. I want to learn the habits of faith, but to do that I must admit that the fear that I so lovingly cling to is false. It is not what keeps us safe.

Hearing the news, therefore, is often a chance in my ordinary day for me to repent — to be honest with God about my failure to trust him and his control, to repent of catastrophizing and ask for his help in trusting him with my life and the lives of my kids, to ask anew for the gift of faith. And it is a chance to respond with love. Right now, Liberian mothers who love their babies as much as I do are not catastrophizing — they are dealing with a very real epidemic right outside their door. If I experience any undo fear, I want that to move me toward empathy for those mothers — to motivate prayer for them and giving to organizations that would extend help.

And, finally, I want that tightening in my stomach that comes as I read the news to be a memento mori, a reminder of my mortality, my finitude, my true precariousness. St. Benedict reminds us to keep our death “daily before our eyes.” The reality is that we are all going to die. Me. My kids. Everyone I know. That is not catastrophizing. That is fact and denying it or blaming the government or the culture or getting angry or mopey about it won’t change that reality. But instead of reacting to that sad truth with either distracted denial on one hand or a cold panic on the other, I want to remember that in Christ we need not fear death; resurrection is truer and deeper and more real than the darkest of my fears.

Comparing oneself to others can reach new heights when the comparison is based on the progress of a dissertation.

Dorcas Cheng-Tozun tells of learning to pursue her calling while honoring her God-given limits.

What does it mean to speak out with your full voice as you pursue God's call in your life? Listen in on our conversation with Kathy Khang as we talk about what it means to speak our truth.