Getting off the Porch: Rachel Held Evans and Millenials Leaving the Church

As an old millenial or a young Gen Xer and as someone who ministers among graduate students who are mostly millenials, I have read with interest Rachel Held Evans’ “Why millenials are leaving the church” and the widespread discussion that has followed.

Evans accuses the church of being “too political, too exclusive, old-fashioned, unconcerned with social justice . . . hostile to lesbian, gay, bisexual and transgender people,” anti-intellectual, and anti-science.

If Evans’ diagnosis of the evangelical church were correct, disenchanted millenials would be crowding the pews of mainline churches, which are certainly concerned about social justice and the environment and so dedicated to being "open and affirming" that the ubiquitous phrase has become something like a creed itself.

However, attendance of mainline churches is in precipitous decline, especially among young adults. (For instance, if the rates of decline in the Episcopal church continue at their current clip there will be no more Episcopal parishioners in 25 years). What we’re seeing, as many have noted, is an overall decline in religious commitment in the United States, the heralded rising of the "nones" — those who identify with no particular religious tradition (See Pew Forum report, “Nones” on the Rise].

Millenials are not the first generation to reject a putatively "out of date" church. The boomers of the sixties and seventies had many of the same frustrations with the church of their youth that Evans expresses in her article. Many left the church.  Yet, Pew Forum research suggests they did so less frequently than young people do today. What accounts for this difference in the way millenials and older generations reacted to the church? 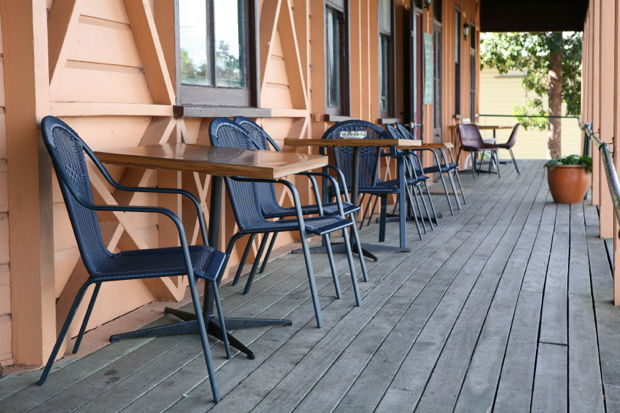 What Walker Percy said of the Old South could be said in general of the America in which the boomers grew up: “The Southern gentlemen did live in a Christian edifice, but he lived there in a strange fashion Chesterton spoke of, that of a man who will neither go inside nor put it entirely behind him but stands forever grumbling on the porch.” The boomers may not have been willing to enter into orthodox Christian belief and practice, but out of a commitment to Percy’s “Christian edifice” neither could they leave it behind. Instead of leaving the church, our parents’ generation sought to reshape it according to cultural norms, relaxing commitments to biblical authority and embracing theological liberalism.

The millenials seem to be choosing a different path. They have grown up in a culture where morality and religion have been increasingly decoupled such that cultural pressure to be religious has substantially lessened.  What the Pew research suggests is that “increasingly, Americans describe their religious affiliation in terms that more closely match their [actual] level of involvement in churches and other religious organizations . . . Americans who rarely go to services are more willing than in the past to drop their religious attachments altogether.” Furthermore, research shows that the one third of adults under the age of 30 who do not affiliate with any particular religion are not “religious ‘seekers’ who are looking for a spiritual home” but are content to remain religiously unaffiliated.

When today’s young adults find they no longer accept the basic claims of Christianity, feeling no cultural compulsion to profess religious commitment, they do not take up the project of liberalizing the church to accommodate their own individual beliefs or cultural mores. Instead, they leave the church all together.

We’re not witnessing the end of the church so much as a decline in nominalism and vague religiosity. If current trends continue, we’ll be left with a smaller American church overall but those who remain in it will be more committed, creedal, theologically orthodox, and find more affinity with global Christianity than American civic religion.

To the extent that, as Evans claims, evangelicals have confused the gospel with the GOP, neglected the clear biblical calling to compassion, social justice, and environmental care, or are anti-intellectual, that is to our shame.  We must repent and change, which may not affect retention of millenials but would make us a more faithful church nonetheless. Likewise, the church needs to continue to proclaim the holistic gospel to young people and seek to do so more ardently, intelligently, and creatively.

But to the extent that millenials are leaving out of offense that the church suggests that God can tell us no or that God calls us not only to creation care but also to chastity or even celibacy or that a church dares to discuss uncomfortable doctrines like sin and wrath, then these young men and women are showing integrity and honesty by leaving the church instead of staying and trying to reshape orthodoxy in their own image. Maybe the church would likewise be showing integrity and honesty to let them go instead of attempting to transform itself, breathlessly trying to make it easier to remain grumbling on the porch.

Jesus had a famous encounter with a young millennial in his ministry on earth, though this millennial lived at the dawn of the first millennia not the third. We refer to him as “the Rich Young Ruler,” and like young millenials today, he’d grown up with a civic religion that had given him a sense of morality. He encounters Jesus, who makes such a difficult and counter-cultural demand on his life that the Scriptures say the man “walked away sad.” We don’t know the ultimate ending to this young man’s story, nor do we know if the millenials who are currently leaving the church will eventually return. But we in the church would do well to notice Christ’s response to this young man. He didn’t judge him, condemn him, or write him off. In fact, Scripture says that Jesus felt intense compassionate love for him. But neither did Christ change his message. Nor did he stumble all over himself to make him stay.

How can the work of Mother Teresa and her community speak to the University world? Through Dr. Poplin’s firsthand experiences, explore Mother Teresa’s vocation and discern your own.

As the semester draws to a close, Jamie Noyd explores the ways our Christian faith can influence and enrich the scholarly work of graduate students.