I was troubled this week by Buzzfeed’s reporting of the hate-filled Twitter responses of students at the University of Illinois at Urbana-Champaign when their chancellor, Phyllis Wise, announced that classes would be held, despite the cold weather. Fairly quickly, a Twitter hashtag called “F---Phyllis” started, with remarks like, “In a room with Phyllis Wise, Adolf Hitler, and a gun with one bullet. Who do I shoot?” Remarks were racist, aimed at her Asian heritage, and sexually violent. 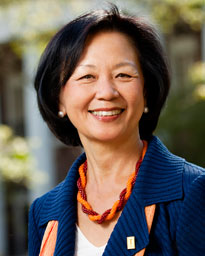 (Although I know readers of The Well are not blushing violets, repeating the words here would repeat their power.)

There was some good response: UIUC alumni and others began using the F---Phyllis hashtag to call out the hate, while explaining to the rest of the world, “Hey, these people don’t represent us.” Some of the calling-out itself devolved into profanity-laced name-calling.

Today Chancellor Wise, who blogs regularly, released an op-ed about the incident on Inside Higher Ed. In it she distinguishes between what is protected free speech and what is “the level of discourse we as educators expect from our students.” She calls for commitment to diverse communities, to vigorous debate and disagreement, and for civility in the midst of it all. On her UIUC blog, she asks that the incident be used to discuss how to make the campus environment “one that encourages diverse opinion and fair debate and is a place where great ideas flourish.”

Here Wise demonstrates grace in leadership. In theological use, as Christians, we believe that grace is given by God when we do not deserve it. It is God’s love, God’s salvation, and “every perfect gift that comes from above.” In secular use, grace is poise and elegance.  In her call for the academic community to be kinder to each other while seeking to understand each other, she displays both kinds of grace. She chooses not to talk about what she calls “a small number of ill-thought postings or bad behavior of a handful of individuals,” but chooses to talk about something greater and more important:  how to disagree with each other and to learn from people who do not think the same as we do. Grace, indeed.