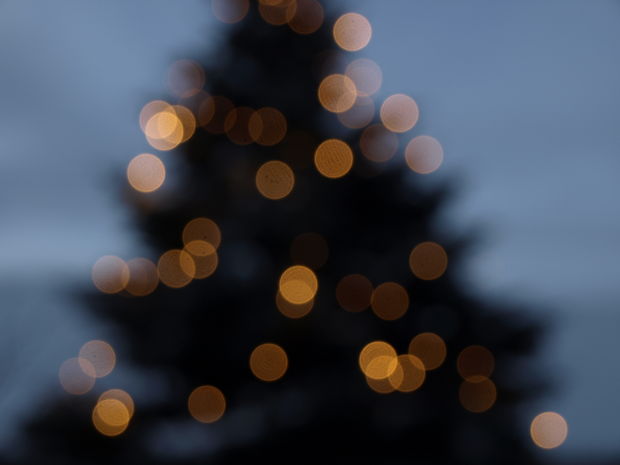 A few years ago at an InterVarsity Christmas banquet, Kurt Bullis told this story as part of the evening’s entertainment.  I so enjoyed hearing it and it awakened so many of my own memories of Christmases past, that I asked Kurt if we could share it at The Well.  It is not typical of our more academic and devotional content, but we thought you, our readers, would enjoy it as well. And just in case you'd like the recipe for the French Breakfast Puffs his mother made, here is one — we had the same tradition at our house. — Marcia Bosscher

I’m the youngest of three. I have a sister who is four years older and a brother five years older than me. For a few years, it was tradition in my family for us kids to sleep in the living room under the Christmas tree on Christmas Eve so we’d see the presents “Santa” had brought first thing when we woke up. Now that I’m a parent, I don’t know why our parents allowed us to do that. Maybe we all slept a lot deeper than I remember, but we never woke up when they put the presents out.

I remember waking up in the middle of the night, after all the presents had been set out, and being so full of wonder at how many there were and wondering which ones were mine. Some years our names were on the packages, but most of the time, my parents used a code to identify which presents were for which kid so we wouldn’t know which gifts were ours if we found out where the gifts were hidden before the big day. Sometimes they would forget the code or forget to label a present and we’d have to pass the present to its rightful recipient once my mom remembered what the present was and to whom it belonged.

And my parents were always careful about what order we opened the presents in so that the last gift would be the best. It was our role as kids to be amazed and blown over at this wonderful last gift and say something like “You got it! Thank you thank you thank you!” with bright cheery faces, awash in materialistic ecstasy.

This particular year, my brother, my sister, and I each had our hearts set on a particular "best" gift. My brother wanted a boom box. My sister had to have a suede jacket. All I wanted was a measly little Nintendo game console which all of my friends had already.

I wanted that Nintendo so badly. I knew the exact size and shape of the box it came in. When I woke up that Christmas Eve after all the presents had been laid out, I scoured them to figure out which of those presents was going to be my Nintendo. But as I poured over the presents, my heart sank. None of the presents were the right size and shape.

“Aha!” I thought. My parents know how much I want, long for, nay, yearn for a Nintendo. They don’t want to spoil the surprise. They want to see that shocked delight on my face when I discover that yes indeed I would be getting my beloved Nintendo this year. They’ve taken the different components of the Nintendo out of its box and repackaged them in smaller, individual boxes to throw me off. Yes, this was it. That box had the gun, this one had the controllers, that one had the main console. The cartridge for Super Mario Brothers could be in any number of boxes, but it was there, I was sure.

Content to wait to be “surprised” until the morning when we were allowed to wake up my parents, I went back to my sleeping bag and back to sleep.

That Christmas morning, after reading the Christmas story and after the French Breakfast Puffs had been made, we commenced opening the presents. But one by one the presents I knew to be the components of the Nintendo turned out to be other things. Things I hadn’t even asked for. Things I didn’t even want.

Instead of the gun, I got a one-person Ping-Pong game: a slab of wood with a handle where the child is intended to delight himself making the ball bounce from one side of the plastic net to the other. Instead of the console, I got a tin of fun-sized Snickers bars which no matter what size they are, aren’t fun when you’ve planned for them to be a Nintendo.

But perhaps my parents didn’t set everything out? Sure enough, after all the visible presents were opened, they brought out one last big one for all of us. My siblings hadn’t gotten their top presents either and I was pretty sure they weren’t as keen on the Nintendo as I was, so I was skeptical that this could be it, but went to open the gift with my siblings like a good sport.

With the wrapping paper ripped off, it turned out to be a keyboard, which none of us had asked for. I don’t remember if us kids conferred non-verbally right there as our disappointment cemented or if we saved it for later when we convened in the upstairs bathroom, but I do remember no one was happy to get that keyboard. What were my parents thinking?

Sometime after we said the obligatory thank yous — when it was okay for us to start doing our own things — we kids squeezed into the upstairs bathroom away from the parents to discuss our disappointment, to bear one another’s burden at how lame this Christmas had been.

We had been pretty clear about what we wanted and none of us had gotten it. What would we do? They had squandered their gift budget on piddly trinkets. We had asked for bread and were given stones. We had gotten snakes instead of the fish we wanted, scorpions instead of eggs. We felt sorry for them and sorry for ourselves. We weren’t sure how to go forward. How could we manage to be happy with the lame gifts we did get?

At some point in our huddle, we heard my dad’s distinctive knock on the bathroom door.

There was no point in trying to hide our secret gathering. We had been found out. We opened the door to both our parents peering dejectedly into the bathroom.

As though needing to sink the final nail into the coffin that contained their hopes for a happy Christmas morning, they said, “You guys are disappointed, aren’t you?”

I think we were all shocked at how obvious we had been.

Our response hesitated there for a minute between frustration about our parents’ total failure and regret for not living up to our parents’ hope for a delight-filled present opening. Finally, we sheepishly admitted our discontent.

My parents felt bad. And we felt bad. We knew our parents didn’t mean to screw up. They just weren’t thinking.

The exact sequence of the next events eludes my memory. But I remember it being later that Christmas day when our parents took us out and bought us each the things we wanted but didn’t get. My sister got the suede jacket she had been longing for. My brother picked out the exact boom box he wanted. And I got my Nintendo.

These were all bittersweet victories for us little consumers. We had the things we wanted and we really liked having them. But our consciences were developing and we couldn’t help but feel a little grimy. We felt the sticky residue of greed and discontent on our prize gifts. We felt the pang of regret. We had received good gifts in that first round of presents. We didn’t need anything else. And yet our ungratefulness had so wounded our parents’ joy in giving us good things that they were willing to spend money they probably didn’t have to see a little happiness on our faces.

Over the next few years us kids slept under the Christmas tree less and less until we stopped doing it altogether.

I don’t remember what happened to my sister’s suede jacket, but I’m pretty sure it went out of style fairly quickly.

I remember my brother made me some great mix tapes on that boom box of his. If I’m remembering right, he took that boom box to college with him and it lasted into the first few years of his marriage.

I remember playing Zelda on that Nintendo for many hours with my brother as we listened to side after side of Songs From the Big Chair by Tears for Fears. You know. The album with "Head Over Heels" and "Shout" and "Everybody Wants to Rule the World" on it.

But I think that keyboard hung around for the longest of all the gifts we got that year.

Yes, we know Christmas is not foremost about the gifts we give and receive, but consider what Patty Kirk says in The Problem of Christmas, "The burden of parenthood, it seems to me, is weighty enough without adding the impossible requirement that we turn happy holidays into tricky history lectures and expect our kids to value only the pious truths of the nativity story in lieu of the popguns! bicycles! roller skates!"  What do you remember about giving or receiving gifts at Christmas? Do you have a story like Kurt's where the rejected gift became the best or most lasting gift after all? Were you ever surprised by a gift?  How do you handle gift-giving? We'd love to hear your stories in the comments.
Tags:
advent | parenting

Kurt is a father of four incredible daughters, the husband of one amazing wife, and is employed as an IT Project Manager. He was on staff with InterVarsity from 2011 through 2017 serving Urbana and the IT Services team. His parents still have that keyboard and bring it out for the grandkids.

We invite you to listen in to these conversations with six women, all from different Christian traditions and roles in academia, to find inspiration for your own Advent practices.

New life is always messy. And it can seem alien at first. Add to that realities like fluctuating hormones and the transition can be hard. When I was pregnant, I tried everything, including eating saltines...