Leoba may be the most delightful saint you have never heard of. At least, this is how I came to think of her last summer, when I met her in my course readings for Called to Holiness at Creighton University. Rudolf of Fulda, a Benedictine monk, tells her story in The Life of St. Leoba. 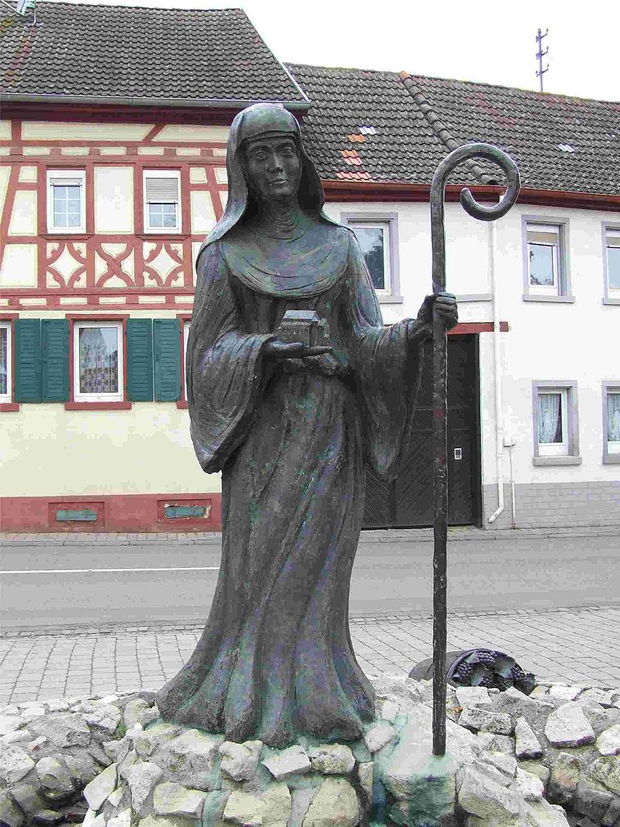 In 748, Leoba left her home in Wessex, England, to join Archbishop Boniface (the patron saint of Germany) in his mission to evangelize the German people. Highly regarded by Boniface for her virtue and wisdom, Leoba served as abbess for a convent he established and assumed wider authority on his behalf when he was absent, an unusual arrangement for the eighth century. In the midst of balancing her extensive responsibilities, she did not forsake deepening her own life in Christ and was known for having committed much of the Scriptures to memory. Rudolf tells this story:

When she lay down to rest, whether at night or in the afternoon, she used to have the Sacred Scriptures read out at her bedside, a duty which the younger nuns carried out in turn without grumbling. It seems difficult to believe, but even when she seemed to be asleep they could not skip over any word or syllable whilst they were reading without her immediately correcting them. Those on whom this duty fell used afterwards to confess that often when they saw her becoming drowsy they made a mistake on purpose to see if she noticed it, but they were never able to escape undetected.

While this story might give an impression of Leoba as an unreformed perfectionist (and perhaps like many women she did struggle with this tendency), we might notice instead her love for and knowledge of Scripture. Leoba’s love for Christ the Word inspired her love for the Word, a devotion which evangelicals can certainly celebrate even if we might not express it as she did.

Above all, love most impressed itself upon me as I read about Leoba’s life. Her very name means “Beloved,” and her first calling was to be loved by her divine spouse, Jesus Christ, and to allow his deep love for her to overflow to others. In all matters, she “so arranged her conduct that she was loved by all her sisters.” Her greatest aim was the practice of charity, “without which, as she knew, all other virtues are void.”

Most telling, in my mind, was the bond of love she shared with Boniface. Leoba was so dear to him and considered such an integral partner in his ministry that “it was his last wish that her remains should be placed next to his bones.” There, buried in the same tomb, he desired to await with her the resurrection of the dead. Although Boniface’s monks feared to honor his dying wish, they did bury Leoba “on the north side of the altar which the martyr St. Boniface had himself erected and consecrated in honour of our Saviour and the twelve Apostles.” Both Leoba and Boniface dedicated themselves entirely to Christ and his mission. As they faithfully kept their commitment to share the abundance of divine love with the Germanic peoples, God’s love united their own hearts.

We are all the Beloved of God. How might God’s deep and abiding love for us animate our lives as it did Leoba’s? How might it inspire, as it did for Leoba and Boniface, our friendships and partnerships? How might it overflow to those in our care? May St. Leoba be to us a friend and guide.

Arts, Books, and Media
By Phileena Heuertz and Andrea Bridges
Mindful Silence: On Becoming a Mystic

Join us as we dip into some gentle instruction on becoming a mystic from Phileena Heuertz's recent book Mindful Silence — our special summer resource at The Well.

Arts, Books, and Media
By Ann Boyd
Sitting with Alice: A Review of "Mirror for the Soul"

Ann Boyd offers a shamelessly-biased opinion of her beloved spiritual director's book on the Enneagram.

What spiritual practices can help develop your resilience in challenging situations? Join us for this conversation with Enneagram teacher Suzanne Stabile as we discuss our individual responses to stress, the benefits of self-understanding, and the opportunities for growth that can be found all around us.