At my first Ash Wednesday service several years ago, I knelt in a quiet, contemplative sanctuary and was surprised by feeling almost irrepressible rage. As the priest marked each attendant with a cross of ashes on our foreheads, I felt as if he was marking us for death. I was angry at death. I was angry at the priest as if it was somehow his doing.
This is unusual for me. I’m not typically emotional in church, much less raging. But the service was too much for me.  There was an infant near me and when my pastor marked such a small child with ashes, I was actually tempted to get up and knock the bowl of ashes right out of his hand. How dare he pronounce death over one newly born! How dare death! This was all wrong. 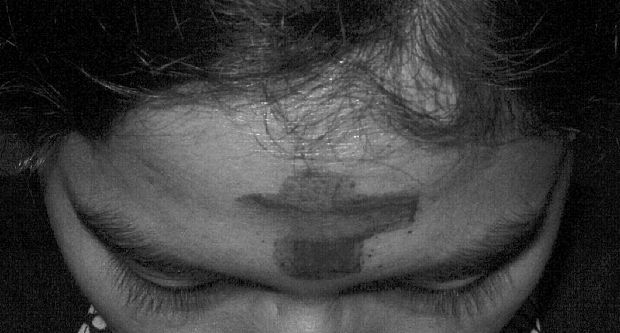 Photo: Edi Wibowo.
Last year on Ash Wednesday, my second-born was only a month old. I held her, with her tiny, limp arms and eyes that still sometimes crossed, as Father Danny marked her with ashes. This time, instead of rage, I felt profound sorrow, even heartbreak. And this time, my husband and the priest leaned around our small baby and all three of us cried together. Danny told me after the service, “I still can’t hold it together when I have to mark babies.”
I don’t want to face the reality of vulnerability, my own or of those I love. I ignore it altogether for months on end. I’m privileged enough that I can create the illusion of control, my own safety, my own self-protection. I distract myself from weakness, from the dark howl of suffering and mortality. Check Facebook. Get really busy. Read twitter. Get distracted by the current controversy of the moment. Check Facebook again. Focus on the positive.
I fill up life with a thousand sparkly objects to avoid noticing the shadow of death. But I can’t shake the reality of it. I bump up against it in small and big ways each day, moments I’m reminded that I don’t control as much as I thought I did. Losing my keys. Getting sick. Mourning with a friend. Hearing about a tragedy. Each time I do, I reel for just a moment, reminded of the stark reality of my own smallness and vulnerability and limits. And then I get back to work, to the ordinariness of the day, to checking Facebook.
Into my false reality of invulnerability, control, and easy amusement, Ash Wednesday proclaims the truth from which I daily flee: suffering children, dying loved ones, the grave. We look squarely at the brutal reality of mortal vulnerability that shadows every day we live, every happy moment. It still makes me angry. More than that, I’m still sad. Like Danny, I can’t get over the reality that children — including my children — come into a world where suffering, pain, sadness, and death lurk, a horrific distant beat steadily growing louder.
The church can be accused, sometimes appropriately, of being irrelevant, pie-in-the-sky, out of touch. But in a world of noise, of Pinterest perfectionism, where we who are privileged can be sated with creature comforts and endless entertainment, I can’t think of anything more honest, gritty, relevant, needed, and counter-culturally prophetic than Ash Wednesday, a day to face our vulnerability without a filter, without distraction, without Novocain. I need to be looked at and told by someone I love and who loves me that I’m going to die and so is everyone I know. It’s a reality that I hate so much that I can never face it unless I am in a community that faces it together.
And the mystery of the gospel is that if Jesus was next to me in the Ash Wednesday service, he would kneel and be marked by ashes as well. He too was marked for death, even from his birth. God himself took on vulnerability. He knew loss. He stared squarely at death. He raged. He wept. He died. Come Easter, we will celebrate his defeat of death through the resurrection. But, for now, in Lent, we make space to sit in the emotional complexity of the “already but not yet,” the place that, if we are honest, we live in each day of our lives from the first to the last.
We are vulnerable, each one of us — as vulnerable as a newborn baby held at a kneeling rail. It’s horrific and unavoidable. But in this shadow of death, there is comfort — not the kind of comfort I manufacture, not false promises of safety and little pleasures, but the relentless, lasting comfort of a Great Shepherd who knows that we’re as vulnerable as bleating sheep and calls us his beloved.
Tags:
lent | suffering | identity

Turn toward the season of Lent through this gentle walk-through of helpful resources.

Arts, Books, and Media
By Sister Wendy Beckett
The Art of Holy Week and Easter: Entombment