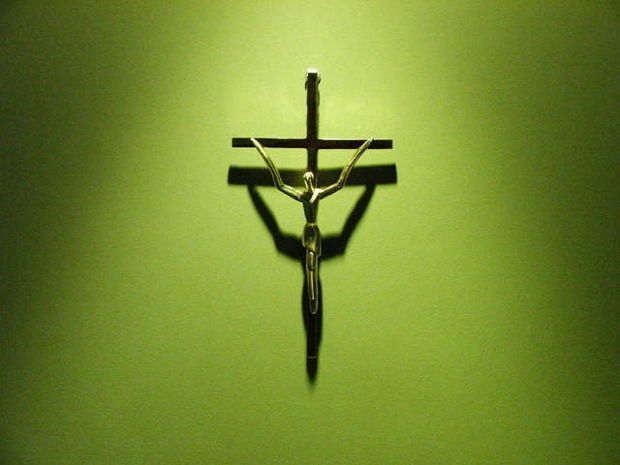 It happened right before this season of Lent began. Trying to keep my one-year-old quiet during a talk at a local church, I took him into a sparsely furnished, concrete-floored room near the sanctuary. I realized it was a mistake when I noticed that my options of things to distract him with were a crucifix and a pulpit Bible. I went with the crucifix, a little metal Jesus splayed out on a wooden cross, because that seemed less destructible than the thin, filigreed pages of the Bible.

I made the wrong choice.

I let my son hold the small metal Jesus on the wooden cross. And he stopped crying. Because Jesus and that cross went right into his mouth.

I thought a lot of things in that moment. Mostly it was: “Oh god, what have I done?”

And then I thought of those familiar words: “This is my body, broken for you.”

And those other words: “Take and eat.”

But the “Oh god, what have I done?” was loudest, and so I tried to take the pacifying Jesus away, which was another wrong choice.

Because that’s when the crucifix fell to the ground and metal Jesus broke off the cross with the most hellish sounding clang, confirming that — oh god — we were indeed doing something wrong.

My son picked up the metal Jesus and waved him around happily.  And I went with it because he’d already defiled metal Jesus with his saliva. And he wasn’t crying.

And I thought: “Sacrilege!”

And also those familiar words: “Let the little children come to me.”

And the words from that country song: “Jesus, take the wheel.” But not in a campy, country tune. It was more desperate.

When the talk was over and I was alone, I had to put Jesus back on the cross.

I found him under a couch, sticky, arms splayed wide, metal “cloth” covering him appropriately, unrealistically.

I had to sit down for the moment because it felt a little profane, more profane than all the rest. And words didn’t come to mind. Because I was putting Jesus back on the cross.

Over the course of Lent, I’ve kept coming back to that moment. I keep going back to it because I came to realize that there are words for it.

And these are the words that get at the significance of Lent, of Good Friday. It’s the time of year when we remember Jesus on the cross. And at the end of it, on one horrible night we carry ourselves and our preoccupations and our snotty-nosed children to church to mentally put Jesus on the cross and into the grave. And we say together the most hellish sounding words:

And it’s profane and terrible...and important.

Because — my God, my God — we have indeed done something wrong.

For so many of us, for far too many days of the year, Jesus is an overly appropriate figurine who cares about all the right causes. We wave him around happily before the neighbors as one who can help because he’s an ethical guru who always listens and is kind and compassionate. Politicians trot him out as one who blesses their demagoguery.

We take and eat and believe in him just enough so that we have community with others who are like us.

Because he is not actually in charge. Because he does not demand change or sacrifice or any real justice. Because he is small. So small so that our apathy allows us to leave him under the couch or in the church narthex because that’s sometimes a more convenient, more comfortable place to leave the Jesus figurine in our lives.

And then I think of the word for this: “Sacrilege.”

And the familiar: “They mocked him.”

I put metal Jesus on that wooden cross and there were no words in that moment because that act and that image — Jesus, arms splayed out, nails in his hands and feet, hung a cross that I put him on — unnerved me. It unnerved me because the image of Jesus dying makes me terribly uncomfortable. Because a God who dies for us — for me — is too much, too big.

If I’m really honest, I want to forget about the cross. I want a deity just big enough, just safe enough to pacify.

And I think if we’re honest, we all tend toward this sacrilege of following a too-small Jesus figurine.

And so, thank God for Lent and Good Friday and all of the accompanying words and images.

A humiliated God-man on a cross who cries: “It is finished.”

And a hellish sounding last breath that, as it clangs and rattles around in hearts and minds, reminds us that Jesus went to his death for us.

And if we really stop and ponder those words and that image we might just need to sit down. Because they remind us that a Jesus who dies and, ultimately, rises for us is no figurine. Because you don’t mold a God who dies for you into your own image or use him for your own purposes because that God is too big. Too big to be haphazardly eaten up by talking heads, too heavy to be waved around for our amusement, too serious for the child’s play that passes for religion.

And this Lent, I’m reminded that this is the truth and this is the Jesus that we really need.

We need the Jesus who died for the worst of the worst of the worst, for all of us, willingly. Because that’s the only Jesus who can take on all the ugly realities of human life...and death. Because only that Jesus — and no one smaller — can fully silence the hellish clanging of sin and war and poverty and racism and sickness that plague this broken world.

That’s the Jesus who doesn’t just pacify us or distract us from our tears.

That’s the Jesus who one day will actually wipe away all our tears.

And there are words for this too: “He is risen.”

In Focus
By Jennifer Woodruff Tait
Holy Week Notes from a Fourth Century Nun: Worship in the Newly Legalized Church

Historian Jennifer Woodruff Tait recounts the journey of Egeria, a fourth-century nun, and her careful notes of the worship practices of the day.

Carmen Acevedo Butcher describes her plans to step away from a daily dance with the Internet and hunker down in the quiet of Lent.

Blog
By Dorothy Boorse
Come Along
Dorothy Boorse gave up Facebook for Lent and was compelled to examine her dreams.
Login