In 2009 my long-standing interest in spiritual disciplines, inspired by my reading of Willard’s Divine Conspiracy, finally developed into some actual practices.  Moving into my new home, I used a beautiful carved wooden screen to create a meditation space in one corner of the bedroom.  I put throw-pillows, candles, and books behind the screen. My boys, Asher and Solomon, were only three and four then, but have fond memories of sitting in the space with me in the peaceful, dim light.

My husband left just a few months later, and took the beautiful screen with him, as it had belonged to his grandmother.  Still focused on gaining spiritual discipline (more than ever, as one might imagine), I picked a spot in my living room to read my morning meditation books.  But a sacred space in my own home fell by the wayside.  Recently, my younger son, Solomon, now seven, mentioned to me how much he loved the old meditation space and asked if we could have that again.  I suppose I had associated it with the screen and had somehow ruled out the possibility.  But hearing this little one’s desire expressed so sweetly, I immediately began to imagine how I could create something new that could serve the same purpose.  When I moved to a new office at work, I replaced a beat-up wardrobe in my bedroom with some beautiful glass shelves from the office, and set aside the bottom shelf as a meditation shelf.  I took an icon down from the wall and put it in a plate holder, grabbed a scented candle, a little ‘God-box’ a friend had given me, a Bible, and a few special books. 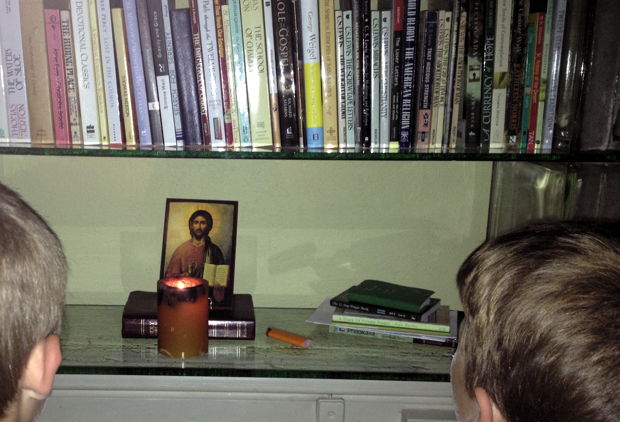 I told the boys that we would stop our evening reading ten minutes early each night for quiet time, and they both looked forward to it.  There’s nothing like turning out all the lights and lighting a candle to calm everyone down.  I didn’t really have a plan, so the three-gratitudes-a-night that we’d been doing for years simply turned into a prayer of gratitude.  I began to teach the boys to speak to God about Himself when thanking Him.  One boy attached the phrase “everything You do is good” to his gratitudes, the older boy added “hallowed by Thy name.”  Then I began reading one psalm to start us off, which got us into some fascinating discussions about the life of David.  Ten minutes proved too short.  We tried some chanting of the Jesus Prayer, but Solomon just said, “Mom, you’re just saying it over and over again!” so I thought we might try that again at a later date.

Sometimes the boys become very still and reverent at the lighting of the candle, and at other times they sprawl out all over the floor and want to chat more about their day.  Sometimes we have an amazing meditation time, and then they fight over who gets to blow out the candle.  I don’t think it matters.

We’re still in the experimental stages.  Perhaps that phrase should be our life’s motto!  I can’t control my boys’ future lives.  I can’t guarantee that they’ll be happy or good.  I can only do my part; I can only bring them along with me on this journey until they begin to forge their own path.  I can’t pretend that I’m any further along than I am.  Kids sniff dishonesty right out.  But like with brushing teeth, a mentor of mine challenged me to just be consistent about doing it.  And sure enough, if we’re all falling asleep with our book and I contemplate just going straight to bed, one of them says, “What about meditation!?”  How precious it is to be a witness to their child-like desire for God.  May it be born in me.

Rachel Ferguson is a professor at Lindenwood University in St. Charles, Missouri. She is co-chair of the Lindenwood Honors College, and Director of the Liberty & Ethics Center at the Hammond Institute for Free Enterprise. Her research interests include Hume’s classical liberalism, the philosophy of economics, and Aristotelian virtue theory. Like a good Humean, she likes to appeal to/tick off both sides. Rachel teaches political philosophy, game theory, business ethics, honors seminar, and the spring seminar in economic federalism. She received her PhD in Philosophy from Saint Louis University (2008). In the meantime, she had two babies, Asher and Solomon, who now appear to be sentient persons, which is weird. She is married to Mike Ferguson of Mike Ferguson Media. You can learn more about Rachel at her blog.

It’s that time of year. I can feel it in my bones. In just a handful of days we’ll all be climbing back on the hamster wheel, arms loaded with books, schedules packed to the gills. Open days on the calendar slip through my fingers ...