I grew up watching my neighbor Hoyt watch the world go by. After Hoyt had retired from the cotton mill, he sat on his porch — a lot. I’m not saying he did nothing, because he also had a large garden and tended football-field-length chicken houses, but this sitting and watching is my strongest image of my friend. And his kindness — he let us use his air pump to inflate our bike tires whenever needed, and once he walked over to our house, barefoot of course, to bring a sack of fresh apples when he knew we were going on a trip, and I never heard him say a harsh word about anyone. 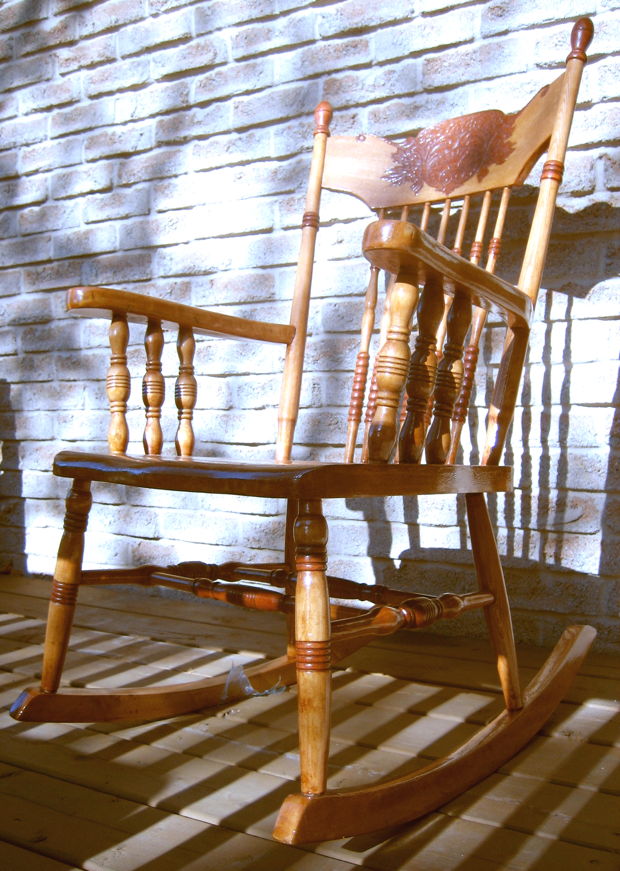 Hoyt worked his whole life, so denim bib overalls were his sartorial favorite. Leaving school in third grade to do farm work, he grew up plowing (something he let me try once, convincing me as I veered all over the field behind that mule that there was more to Hoyt than I previously knew). The only time he traveled outside America, he told me, was when he was in the army.

He had a keen awareness, though. When I returned from studying abroad twice, there on the porch Hoyt asked me questions that went right to the heart of my experiences, and I’ve wondered if his discernment partly came from sitting on his porch watching cars and trucks and semis and campers and motorcycles and horses and boats and neighbors go by. He watched the world a whole lot more than he talked.

The image of my friend Hoyt sitting on his porch not too far from busy highway 20 stays with me. What would he make of Facebook had he lived to see it? I think of him whenever I watch the world from the vantage point of Facebook’s virtual veranda. I hope I make good use of my time, as Hoyt did.

Reflectiveness mostly requires a willingness to be still. Hoyt had that. I want it. Inchoate yearning is a prayer before it is ever spoken; I hope a desire to be still, even in an anxious-and-over-analyzing human, is a way of learning stillness.

It’s hard because we’re transitory beings — always in transit — walking, driving, boarding trains, hopping busses, riding escalators, peddling bikes, flying in jets — and, through Internet magic, we can travel anywhere in the world just by mouse-clicking or putting our hands to a keyboard; we move about as if the world couldn’t do without us, as if we must be everywhere, covering everything that needs to be done.

So my friend Hoyt and his favored indigo biberalls stay in my mind. How welcoming must have been the quiet he found on his front porch after decades of shuttle looms clanking. Still today his attention to life is what captures my restless mind. Attention’s beautiful centeris a “stretching” towards another, from Latin tendere, also in tender, tend,intent, and, yes, tendon. At its best, attention is the tenderness created by loving intention.

I like to sit on my Facebook porch prayerfully. I don’t post a whole lot (you won’t know I had delicious tacos for supper, but I’m always interested to see what my friends eat, especially LaVonne Neff, who by all photographic evidence is a marvelous cook), but when a friend offers me that click-gift joy of “liking” my post, I periodically return to my status update, scrolling down the “like” list slowly, stopping briefly to pray for each friend, remember times together and wonder how he or she is doing.

This habit extends to status updates I happen to see. My friend Toni’s weather updates keep me in touch with her and her family, serving the country in the military, and when they need rain or it’s terribly hot there, I pray for them. I also love seeing students in caps and gowns, friends going back to school, new jobs, newborns, adopted cats, old friends traveling, as well as prayer requests. Each gets a silent, inward embracing.

This porch-view habit travels with me. Running errands recently, I stopped at a light beside an SUV with a missing hubcap, and in it a young woman with a brown ponytail pulled through a salmon baseball cap. What snagged my attention was she had a dried long-stemmed rose on the dash in front of her. Was it from a senior prom or a long-standing boyfriend? Then I saw she was texting, and noticed her right arm decorated with the most intricate, colorful tattoo I’ve seen in a while. My middle-aged eyes couldn’t make out what it was from that distance, at least not without staring.

Years ago I would’ve judged her — texting while driving, an outsized tattoo, a lost hubcap. Why? Instead, I took everything in and prayed for her and the giver of that brown and brittle, sweet saved rose. I couldn’t help but wonder if she was in school or working, and if her life was turning out the way she’d hoped. I began thinking how little we glimpse of a person’s actual existence. We see the tip of the iceberg of cell phone, tattoo, rose, hubcap.

I considered again how Hoyt was slow to judge others harshly. I think it had to do with his sitting often on his porch. Did he analyze himself then as he watched others, coming to the wisdom of stillness?

Our souls are fed remembering that Psalm 46 celebrates the divine presence, “our refuge and strength” who nourishes our courage in the middle of hardships, saying, “Be still (Raphah), and know that I am God.” And in this Psalm God asks us to do more than “be still”; raphah means “to relax one’s grip on something,” even perhaps “to unclench the warrior’s fist.” [See note.]

Instead of “fighting” the chaos of today, help us be still, Christ, let go, and know you.

Spiritual Formation
By The Well's Staff Team
Dwell Among Us: Advent Breath Prayers 2020

As we enter into this season of waiting, we invite you to receive the gift of peace through this final prayer in this series of eight breath prayers for Advent 2020.

Spiritual Formation
By Cindy Bunch
The Rewards of Noticing

Cindy Bunch invites us into her habit of nature-watching as a tool for staying grounded during a challenging season.

As we enter into this season of waiting, we invite you to receive the gift of peace through this sixth prayer in this series of eight breath prayers for Advent 2020.