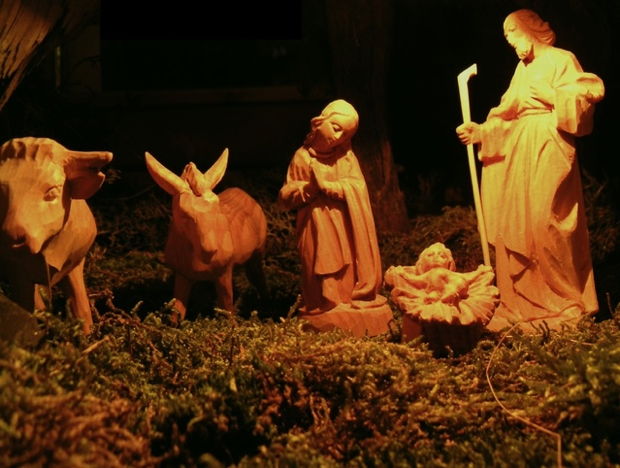 When you grow up with divorced parents, Christmas is messy.

I have this distinct memory of the first Christmas I spent with my newly single dad. When we got to his small, under-furnished apartment, I think it hit all of us at the same time that he was wildly unprepared to celebrate Christmas with his two kids.

There was no tree, no lights, no decorations, no Christmas goodies to share.

It was Christmas Eve. And I was seven.

And I didn’t know Jesus at the time — but if I had, in that moment, I might have thought he wouldn’t have wanted to spend Christmas with us.

Probably in seeing the look on my brother’s face and on mine, my dad became immediately committed to having at least some decorations, some semblance of Christmas. From deep in a closet in that little apartment, he produced a single strand of lights, some newspaper and scissors, and a giant, blow-up Godzilla.

My dad spent the night blowing up that ridiculous Godzilla while my brother and I “made ornaments.”

It turned out that with a strand of lights and newspaper ornaments looking like garbage duck-taped all over him, Godzilla became one of the best Christmas trees ever.  Oh, but that Christmas was a mess.

Still, I realized, even then, that there is beauty and even goodness in the messy things of life.

Unfortunately, it took me a longer time to realize that Jesus would most certainly have spent that Christmas with the three of us.

It took me a long to realize that Jesus would be (and probably was) with us in that Christmas mess.

And the reason I think it took me so long to realize this is because we, in the church, have a bit of a problem. Our problem is that we clean Christmas up. We clean it up to the point that our very real Jesus becomes a bit of a merry caricature, but not someone who can relate to our messiness.

And the story that’s told in Scripture is just bare bones enough and crazy enough that our doing this makes sense. The garbage and the Godzillas in the details can be left out because who wants the story of actual, messy, beautiful, profound birth splayed out on their coffee table each Christmas?

No, we want to welcome our guests with a very merry nativity. We want the birth story where Jesus doesn’t cry, Mary doesn’t look sweaty and exhausted from pushing a child out of her body, Joseph isn’t that overwhelmed, and there’s certainly no blood or tears or other very normal bodily fluids anywhere ever.

And then we want to put baby Jesus in a super clean swaddle and in a super clean manger, which is always interesting to me because I grew up on a farm and animal troughs if they’ve been used at all are gross. The cows we had drooled like mad when they ate so there’s this natural build up of slime.  But we don’t want slime in our manger scenes.

And then, even though Scripture doesn’t do this at all, we surround baby Jesus with the most peaceful of adoring animals — which again is very interesting. Being a farm girl, I know that animals are erratic and curious and no sensible mother would put her floppy, defenseless, new born baby — maybe even especially Jesus — within licking distance of an ox. But, in our very merry nativity, yes please!

I think we want to forget that the nativity of Christ is actually about birth. Real, live human birth. Which is, for all its beauty and profoundness, really, really messy.

We clean it up. And I think we do this because it makes it safe. Because how could the God of the universe come in that way — a way that’s not just humbling but messy and dirty and strange and overwhelming?

And why? Why would God do this? Why would he come in this way with no decorations or goodies to share?

Perhaps it was to make it actually human. Perhaps it was because God wanted his nativity to be as messy as the rest of ours. Perhaps it was so that no matter what Christmas a child or adult faces, Jesus has already seen it, experienced it.

So for all those whose parents aren’t really together...
whose home life doesn’t make sense, or is chaotic and strange,
for those whose life is a bit of mess right now
for those who don’t have a bed or a home,
for those who have experienced pain, or want, or poverty,
for those whose Christmas doesn’t resemble anything in a Pottery Barn catalogue
for those hundreds of thousands of refugees around the world and throughout history, those children who don’t get lights or trees because they’re fleeing their home and violent regimes, and evil, terrible Godzillas,
or those of us who are simply overwhelmed by the all the garbage in this world right now...

Here’s the thing about Jesus’s nativity: there was just enough chaos and slime, mess and tears and pain, enough to make it real.

When we see this radiant Mary, with her hair stuck to forehead from sweat and tears on face, filled with oxytocin and adrenaline bonding with her newborn who cries, because he’s cold and taking his first breaths...

We’re reminded that God came to us and was truly with us.

We’re reminded that no mess, no amount of garbage in the world, no Godzilla-like terror can overwhelm us because the God of the universe chose to be born in the most lowly of ways, in the most real of ways so that we might see him as that.

God actually with us. Born for us.

Beth Bevis Gallick reflects on the holy moments she experiences in a temporary living situation that has become a home.

Podcasts
By Ann Boyd
Advent at The Well: Joy

Embrace your inner coziness and join us for the third episode in our four-part Advent meditation series on the podcast, this one focusing on the joyful meeting of Mary and Elizabeth.