Rejoicing in the Fullness of Easter

When I was 26 years old, I began to grasp the profound significance of Easter. Despite being surrounded by liturgy in my Catholic childhood days, despite the growth of my gratitude for the cross as my faith deepened in college, it took a series of panic attacks and a foray into the anguish of anxiety and depression to show me the riches of my Christian faith. 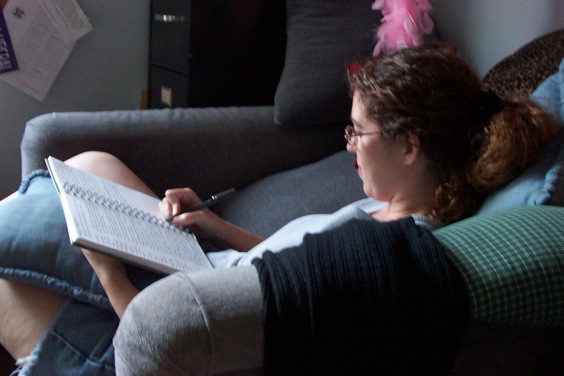 There are a number of photos from this time period that feature me journaling or drawing — vital tools in my healing process.
I was sorting through muck from my childhood and adolescence at the time. It’s not necessary to go into the details — suffice it to say that my father died suddenly when I was ten, and I was left with an undiagnosed manic-depressive mother and (mercifully) an older brother who did his best to watch out for me while he began to make his own way in the world. It wasn’t the most horrific situation, but it took its toll on my developing psyche.
My husband and I had been married only a year when the panic attacks began to hit. We were both surprised to find that such darkness lay beneath my eternally optimistic exterior. My therapist later told me that it wasn’t until I felt safe enough in a close relationship that my mind was able to release the toxicity that had built up over the years. And so we leaned on each other and on others, trusting blindly that this shadow would not last forever.
During one of my darkest periods, I had a transforming experience of prayer. My desperation powered my willingness to ask for help in whatever context I found myself. My anger at God was unrelenting, and I repeatedly beat on his chest, demanding relief from depression, fear, sleeplessness, and the constant anxiety that hovered around me. I was prepared to do any amount of asking in order to receive healing.
This particular day, at a particular InterVarsity staff conference, I decided to ask for prayer yet again. Mary Anne lifted me up before the Lord. I don’t remember what she said, but I do know in retrospect that the light began to break through. I can’t attribute it to anything other than grace and mercy. At that moment, I started to fully comprehend that Jesus experienced darkness even more profound than my own. Everything I was feeling, Jesus had tolerated a thousand times worse on the cross. And yet it was through that deep darkness — through that literal hell — that God brought the most profound good into the world. He didn’t bypass the suffering and torment, and he didn’t leave it there either; he transformed it into glory and love and generosity and joy. And if God can do that with the cross, maybe that means he can do that in my life too.
I would never want to experience those days of anxiety and depression again. But I believe God has redeemed them in my life, bringing goodness and hope to me and others through that time. I see the fruit in conversations I have with people struggling in a similar place. I see the fruit in the fullness and depth of my own emotions today — an area which had been stunted into mere cheerfulness for years. I see it in my parenting and in the care with which my husband and I raise our two daughters. And I see it in the forgiveness I can offer to the actors in my own childhood. Now that the storm of anger has passed, I can see that we were all just muddling through the best we could with the resources we had.
As a child, images of Jesus on the cross felt far away and frightening. Even today I find that I can only handle deep contemplation of the cross for a few minutes before it feels overwhelming. But the truth of his suffering is the very thing that pulled me through my darkest moments and into the glorious light. He is the risen Christ, and by his grace I am standing right there with him.
Hallelujah! He is risen indeed.
Tags:
lent | prayer

Ann is the Women Scholars and Professionals Podcast host and the managing editor for The Well. She has worked for InterVarsity Christian Fellowship since 1997, exploring her interests in community, spiritual formation, and writing. Ann has a BM in Music Education from Northwestern University and lives in Chicago, Illinois with one husband, two spunky teenage daughters, and two snuggly cats. You’ll often find Ann baking sweet treats in the kitchen while listening to a podcast or audiobook.

Join us at The Well in our sixth week of reading Psalms for Lenten devotions this year.