Strawberries, a "Cloud," and Giving Peace a Chance

I went strawberry-picking with a friend the other day. The afternoon sun was welcome after so many weeks of cold, wet weather, and when it got too warm, a good breeze blew coolness through the rows of low-growing green plants that offered us bright jewels of the rose family and gave me visions of shortcakes piled high with sliced red fruit and crowned with chilled whipped cream. After I loaded that flat box heaped with crimson treasure onto the front seat of my Ford F-150, we rode back enjoying that unforgettable pre-summer perfume. 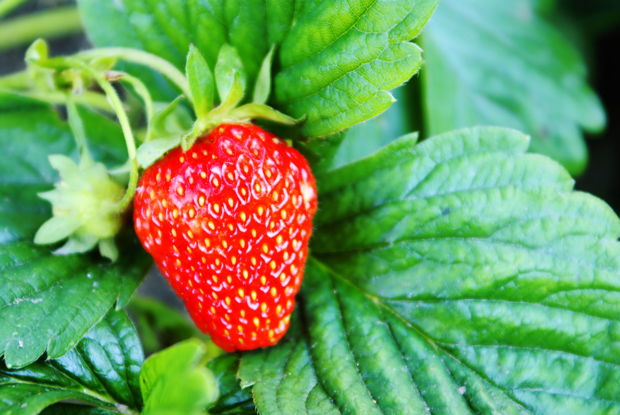 I marveled later as I sliced these hand-picked berries how different they are from the usual store-bought ones — not outsized, not spongy, not white inside. These were dense in texture, I kept thinking of fudge for some reason, and when my paring knife slid through each several times, it found over and again a shining red sweetness.

Since then, I’ve been thinking that picking strawberries is one very good way to honor God’s creation and community. My friend and I now have a joyful memory that (unlike Facebook and other Internet “experiences”) involves actual sun, red dirt, cool wind, blue sky, a few white clouds, the ambrosial smells of fresh strawberries, sticky juice running down the hand, and real-time chats enjoyed person-to-person across rows that reminded me that life is beautiful.

Talking with each other in person and picking strawberries in the sun, we need that, surrounded and enmeshed as we are in electronic media.

Half a century ago, Canadian communication theorist (and English professor) Marshall McLuhan foresaw this e-revolution and described it in The Medium Is the Massage and Understanding Media. He was the first to ask, “What do these media do to the people who use them?” because he saw electronic media as “extensions of ourselves” that “create a totally new human environment” that tends to “numb” us.

In a recent McLuhanesque analysis, "The Numbing of the American Mind: Culture as Anesthetic," New York University anthropology professor Thomas de Zengotita points out that postmodern life is “sink . . . or surf” and our culture a “great blob of virtuality” spawned by the Web, the Ethernet, and satellite cable TV, to which we now add the iPhone, the Wii, and other “Virtual Environments everywhere” that produce the “sheer moreness” of our lives and “a spiritual numbness”; but cultural stimuli’s overwhelming “moreness” is no new notion, for at the end of the nineteenth-century, Friedrich Nietzsche observed, “The massive influx of impressions is so great . . . [we are] . . . suffocating in a vast goo of meaningless stimulation.”

To exchange this “vast [virtual] goo” for fresh air, we can pick strawberries with a friend. I can hold hands with my husband when we go for walks and hug my teenager and my middle-schooler as much as they’ll allow. I also take students to lunch. We break bread together. I can’t begin to say how much I enjoy these lunches of pasta and garlic bread rolls, or piping hot chicken sandwiches and sweet tea swimming in a tall cup of crushed ice. I also can’t explain how much I learn about students — their lives, concerns, questions, hopes, and joys — when we sit across from each other and talk as we eat something delicious.

Looking each other in the eyes, watching facial expressions, and listening to changing tones of voice, we give peace a chance, as my friend David Roland likes to say.

D Rol (as he is called by one and all) consciously works on building relationships. Dropping by faculty and staff offices to listen and to pray with others, hosting lunches with students, or taking a sick student to the doctor, this campus minister spends quantity time with people in a variety of ways and thus embodies the Sermon-on-the-Mount truth of Matthew 5:9, “Blessed are the peacemakers, for they will be called children of God.”

A recent Facebook status update by D Rol was an encouraging reminder of what makes any loving community possible (as well as evidence that even a solid relationship-builder is not averse to using a social network in a pastoral fashion):

"It is not who you are or what you’ve been that God sees with his merciful eyes, but what you want to be." The unknown author of the Cloud of Unknowing is reminding us that it is not what we do on the outside but what God is doing on the inside. It really is hard to describe in words what God is doing in us. Amen.

Community is possible because the Father sent his Son to show us how very real (not virtual) incarnational love is and that he loves each of us so much that he is also in us as Holy Spirit; seeing not our pasts but what we want to be, his Spirit is healing us to become more loving.

Rumi also sings eloquently that creating community (in whatever form, from strawberry-picking to holding hands to sharing a meal) really does give peace a chance:

Every war and every conflict between human beings
has happened because of some disagreement about names.
It is such an unnecessary foolishness,
because just beyond the arguing
there is a long table of companionship
set and waiting for us to sit down.

Reflections
By Rebecca Carhart
The Problem with Comparing My Blessings

Rebecca Carhart offers clear thinking on the topic of comparison and suggests a helpful path into perspective and gratitude.

Reflections
By Grace Chiu
Navigating Singleness: Finding Love That Will Not Let You Go

Amid the cacophony of advice from well-meaning friends, writer Grace Chiu finds the most difficult counsel she’s had to wrestle with is from God himself.

Staff Resources
By Stephanie White
Grad Women Support Group I: Why We Need It

UW-Madison grad women reflect on the power and necessity of a support group in their academic lives.