I like snowshoeing. But since I moved south of the Wisconsin border almost seven years ago, there has not been much opportunity to indulge in this winter pastime. A few hundred miles makes a difference in inches of snow received, and the winters I have spent in Ohio and Indiana have never provided enough powder to warrant snowshoes. Until this winter, that is: the winter of the polar vortex, subzero wind chills, and snowstorms named after Greek and Roman gods. (Growing up in Wisconsin, we simply called this sort of weather “winter” and went about our regular business in a few more layers, but I digress. I am starting to sound like my forebears who walked uphill both ways in a blizzard to school every day.) 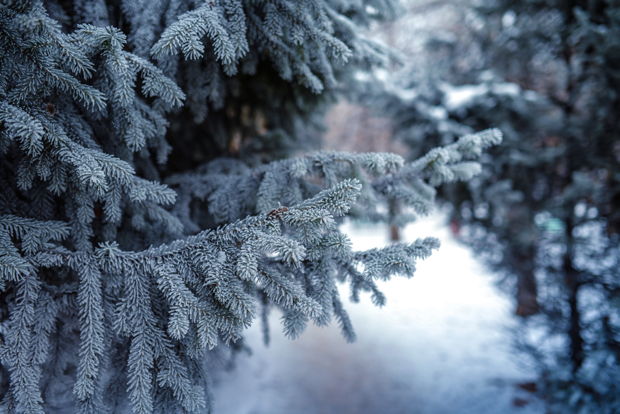 A few weeks ago, tired of feeling cooped up in my apartment as the result of my town’s insistence that snow will clear itself from the roads, I remembered what people who live in snowy climates say: “The best way to enjoy the winter is to get out in it.” I dug my snowshoes out of storage, strapped them on, and went for walk through the fields that surround me on the edge of town. It was glorious. I remembered winter’s pleasures — that crunching sound snow makes under your feet, the sparkling glints of light playing across its clean surface, each inhalation of crisp air. Walking in winter reminds me that it is good to be alive, that the world we live in is a wonder even when it seems its most inhospitable.

Last night, we received nine fresh inches, and so this afternoon I headed out again and delighted in being the first to make tracks across the untouched landscape. Eventually, my legs grew weary of breaking a trail. Wishing for a companion whose steps I might follow, instead I circled around and returned partway home in my own tracks. As I placed one snowshoe in front of the other on the path I had already cleared, a very simple, very familiar truth settled on me anew — how good it is that Jesus has already broken our trail. Following him, while never easy, must certainly be a better choice than making our own way across the wilderness.

Gregory of Nyssa, whose Life of Moses I have been reading recently, has drawn my attention to the centrality of the act of following for all who seek friendship with God. Followers put themselves in the best position to behold God. As Gregory says, “to follow God wherever he might lead is to behold God” (emphasis mine). Like Moses hidden in the rock when he desired to see God, we glimpse God’s glory from behind as we follow his tracks, even when he leads through a seemingly endless winter, real or metaphorical.

And let us hope he leads us out of winter soon. For as much as I like snowshoeing, I’d rather put on my hiking boots any day. Winter has its delights, but this year I think we are all glad it doesn’t last forever.

Reflections
By Sharon Gartland
Life with the Brakes On

Sharon Gartland reflects on the challenges and benefits of following the pace Jesus sets for her life.

My bottom was already numb, and my skinny shoulder blades ached against the hard wooden pew where weekly as a child I sat obediently a few rows back on the left-hand side of the church with my family. Mostly I spent a lot of time staring at the stack of big black hymn numbers . . .

Nikki Toyama-Szeto wonders why we as Christians try to look like well-polished specimens rather than enter the rock-tumbler that might actually reveal — and heal — our flaws.