The Value of a Hank

I spotted the beautiful blue-and-green variegated yarn on the sales table at a local yarn shop a few weeks ago. One hundred percent Andes wool, the loosely wound hank of yarn lay gently twisted in a figure-eight pattern. I couldn’t resist.

Yesterday, tired and feeling frustrated by writer’s block, I opted to knit rather than walk or work while I hung out at my children’s soccer practice. I pulled out the hank of wool, removed the small pieces of yarn tied to keep it in its figure eight, and unwound it into a large loop.

But I still couldn’t knit from it. The wool stuck to itself and tangled. Every time I pulled, it snarled. 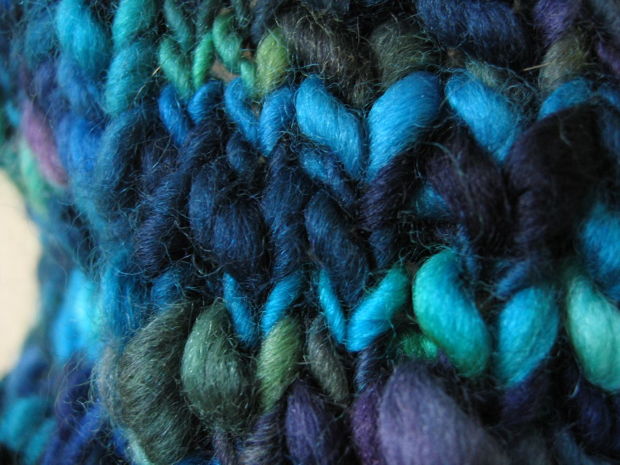 I remembered the last sentences from my devotions that morning: “You inhabit a fallen, disjointed world, where things are constantly unraveling around the edges. Only a vibrant relationship with Me can keep you from being unraveled too” (Sarah Young, Jesus Calling).

I continued unwinding the yarn, thinking about that quote as I formed the end into a tiny wad and wrapped round and round it, rotating the emerging ball so it stayed balanced. Still the hank resisted my efforts to unwind it. Eventually I hung it around my neck and lifted one loop at a time as I wound.

I could identify with what Young wrote about unraveling. It has been a consistent prayer during these last few years as I’ve mothered our four kids and taught and gone to school myself. Last year, when we first took in two international students and with my youngest still home part-time, my feelings of unraveling progressed at times to a fear. I am coming undone, I would cry, and then I would see, time and again, God holding me together.

But He is unraveling me now. For the first time the kids are all in full-day school, and I am not teaching or taking classes, just pursuing freelance writing and wondering what all my preparation — all those classes — will lead me to. Though I have writing deadlines, I have large chunks of alone time in which to manage them. I am not frantically rushing from one school to another. I have quiet hours in which I don’t hear “Mom” or “Mrs. Underwood” at all. It is an oddly unsettling feeling. It is strangely lonely.

Late one night last week, my husband prayed — in what I think were Holy-Spirit-guided words — that I would find my value only in Christ. He didn’t elaborate, but his words suddenly made things a little clearer to me. I find my worth in people’s approval of my work. It’s one of the reasons I like taking classes and teaching myself — you get regular feedback. In the absence of this feedback, I was obsessing over the success of my work. How will I know that I am valuable if I don’t have people telling me I am? I had not asked this question aloud, but it was becoming my underlying motivation.

Sometimes God must do some unraveling to make us see ourselves first and foremost as His. We have our roles set; we are comfortable in them (oddly enough, we CAN get comfortable with frantic schedules and too-long to-do lists!); we find our value in them; we may even brag about them. We have reputations of being responsible, capable women who can juggle a ridiculous number of things. But God says, “I can’t knit with that hank of wool you have arranged just so. I have a finished product in mind for you, and you will have to be unwound for Me to work with you.”

There are some drastic examples of this in Scripture: Joseph had to say goodbye to the pretty coat and favored-son status; Moses waved adios to the palace; Esther hugged her beloved uncle and entered the palace while Abraham had to welcome the tent of wandering. God unmakes in order to create and fashion and teach.

It took me a long time to wind that ball of yarn, but when I was finished with it, it seemed small — compressed. It wasn’t nearly as pretty as it had been before. I wouldn’t have bought it if it had looked like that, I thought.

But its value now is not in how it looks at all.

Its value is that it can be used.

And the end result will be beautiful!

Philippians 1:6 "I am sure of this, that he who began a good work in you will bring it to completion at the day of Jesus Christ.”

Jen Underwood
Jen Underwood lives in West Chicago, Illinois, with her husband, six kids (three biological, one adopted, and two international students), and a dog. After many years of teaching (middle-school through college), she is now working on a theology degree, blogging at jenunderwood.org, writing magazine and news articles for a Christian high school, and freelancing in any spare time. On her list of "likes" are interesting and thought-provoking books, walking in the woods, knitting, breadmaking, and spending rare moments of quiet with her husband.
See other contributions by this author

English professor Angie Crea O’Neal considers the mysteries of the opal, her October birthstone, in this creative non-fiction reflection for The Well.

I’ve been a social justice warrior since midway through the first grade. The “new girl” in my class, who also happened to be blind, was unable to participate in our lunchtime kickball game...