Wagering on the Women: Doubt, Faith, and the Resurrection 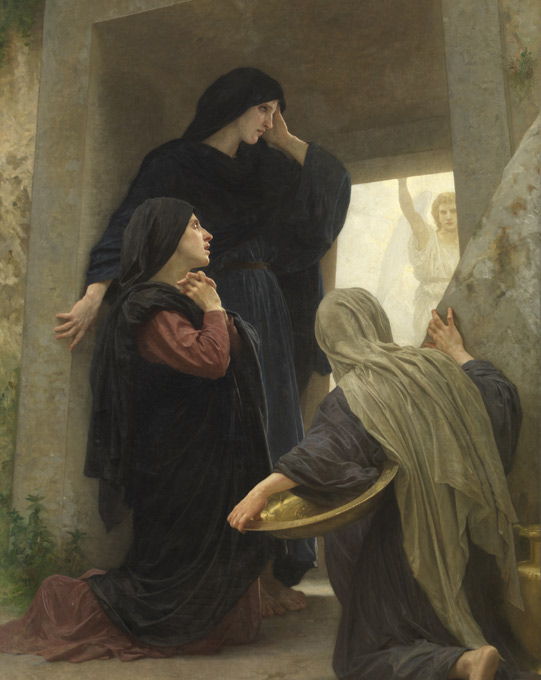 Le Saintes Femmes au Tombeau by William-Adolphe Bouguereau
I am learning that, by nature, I'm a doubter. Some friends say it's because of my enneagram type. Or it could be because I have lived among so many skeptics. Or perhaps it is due to personal sinfulness and weakness. For whatever reason, I question most everything and I'm certain of very little.
And then there's this claim that Jesus died and was raised from death to life. And I have to decide if I believe it or not, an unavoidable decision that shapes everything else.
I believe in the Resurrection. That is why I'm a Christian.
I believe this, in part, because it seems unlikely to me that the apostles, who by all accounts were basically cowards, would each — in separate times in different parts of the world — be willingly tortured and killed for what they knew was a lie. This lie would gain them nothing — no money, no power — and cost them their lives. These were the very men who bolted at the first sign of danger and abandoned Jesus when he was arrested. Yet, for the sake of their message about the risen Christ, each suffered in almost unimaginable ways. And each one stuck to their stories — personal stories of literal encounters with a Resurrected Christ — until the end. They proclaimed their message not in some kind of Jim Jones, amped up, emotional mass suicide, nor with violence toward others or in a move to gain power, but in lonely jail cells and individual, gruesome torture, exile, or martyrdom. Something changed these people.
For someone like me who doubts everything, what I believe is always a matter of probability rather than scientific certainty (This is why I hate that annoying evangelism technique: "If you die tonight are you 100% certain you will go to heaven?” I always want to say, “Look, I'm not 100% certain that I'm standing here talking to you right now.") So I could be wrong, but it seems far more probable to me that the apostles’ claims are true than that they made it all up. And, of course, epistemic humility — the "I could be wrong" that we each and all carry around whether we admit it or not — does not get me out of having to actually address the question and decide if it is true — or if I believe it enough to live as if it is true. No one gets out of choosing if they will believe the apostles or not.
In short, I have believed the Resurrection because I believe the testimony of the apostles. (I wrote about this in her.meneutics a few years back).
But this Easter, I've been thinking about the women.
Until recently, I had not thought much about those faithful women who announced the empty tomb. If the gospel writers wanted to make an air-tight case for Resurrection, they would not have made its first proclaimers women, who, as a sex, were viewed as inferior, even untrustworthy. Much less, these particular women, who were not noble women or powerful women, but poor outcasts, the most ordinary, the most easily dismissed.  Yet, there they are. And their reaction — asking the gardener where the body went — reads like non-fiction.
These women, even more so than the male apostles, had nothing to gain by proclaiming Resurrection and everything to lose. They knew that their testimony, as women in their moment of history, would not be believed. And indeed not even all the apostles believed them. Luke tells us the apostles first thought the women were “speaking non-sense.” These women knew that they were risking ridicule, persecution, and charges of blasphemy by telling their story. They came to the tomb that morning expecting death, ready to embalm a body, and encountered something that changed them forever. After which, they, even as the vulnerable and despised of their society, spent the rest of their days proclaiming Resurrection. Tradition tells us that Mary Magdalene, despite danger and gender limitations of her day, even travelled around (like the apostles) to proclaim the gospel (possibly even to the emperor).
I believe these women. I've bet my life on the claim of Resurrection made by these women. But, to be fair, they did too.
Tags:
lent | faith | anxiety, fear & stress

Join us at The Well for our special Holy Week edition of Psalms for Lenten devotions this year.