When Fighting the Fear = Waiting It Out 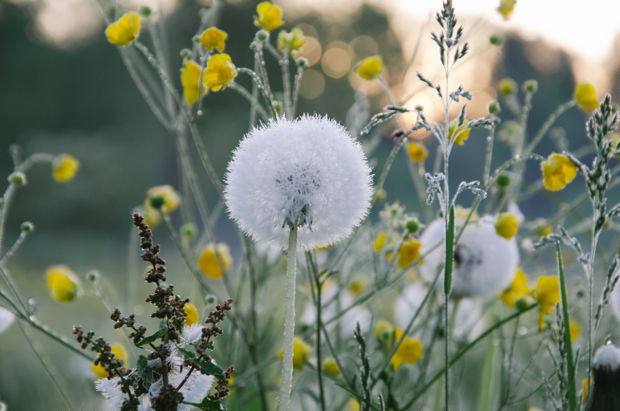 This summer, we watched and waited as our garden unfurled. Andrew and I are renting a house that only recently became a rental, and the people who owned it and lived in it before us left a beautiful batch of perennials for us to enjoy. But, since we’d never had a garden — let alone a yard — in our married life, at first we couldn’t tell a weed from a flower.

Every week a new flower or plant would reveal itself to us by way of a small shoot of green, and we’d hold our breaths to see what colour and shape it would take on. Sometimes we’d recognize it immediately (“Oh,” I’d say, “that’s a lily!”). Other times, our neighbour would know (“Yes, the previous owner planted those lupines”). But often we had to simply let it grow, waiting to know if it was a flower or a weed, getting to know our garden slowly.

I’ve made that sound kind of peaceful and wondrous, but, as with so many things over the last year and a half, my gardening was fraught with anxiety. I was afraid of what our neighbours would think if our garden was full of weeds or even less-than-perfect flowers, and I was afraid that I wouldn’t have time to do it right. These are the same fears, over and over again, I’ve been telling you about.

Even as the fall has arrived, despite how warm it’s been here, and the garden is no long offering new shoots, and I’ve started my second year of this job, I find myself seriously questioning if this is the job for me. Yes, it’s true. And I’m going to tamp down the fear that panickedly hisses at me not to say that aloud where my colleagues might hear, because I’ve heard it’s utterly common for new faculty to question their work. Because now it’s for real, so it better be perfect. Again, the same fears I’ve been telling you about. I haven’t told you the whole story, though, so here’s the background:

I set two goals when I started my PhD program in Wisconsin: first, get a job near my family in Ontario and, second, get a moving allowance so we wouldn’t have to move all those blessed books again. I took the first goal quite seriously, making contacts with Canadian scholars, building my cv so that I would be irresistible should a Canadian job come up, scanning job listings to see what Canadian universities were looking for and how my work might fit in, spending every cent I could spare on travelling to conferences in Ontario. And I worked hard to get my degree done within five years so I wouldn’t be caught in the endless PhD trap. But when it finally came down to going on the market, I wasn’t ready. I made the tough decision to take a sixth year and really finish well, even though I was sick to death of being a student.

After I made that decision, I was relieved, especially when I became (finally) pregnant for the first time. But then that May, a full-time, member-of-the-faculty lecturer position popped up. In Canada. In Ontario, no less. Within an hour of my family. Oh my goodness.

After a whirlwind eight weeks of a campus interview, a job offer despite the fact that my dissertation wasn’t finished, apartment-hunting even though the contract wasn’t firm yet, then finally signing the contract while also spearheading a move across a border, and moving into a new place one day before my first day on the job — oh, and at five months’ pregnant I was still sick as a dog — well, I was really, really thankful for that moving allowance. We made it to Ontario, unpacked our books, I started work at the University of Waterloo, and I kept writing my dissertation despite the nausea and my lecturer teaching load. On paper, I was well on my way to accomplishing my grad-school goals.

But I cried every day. Over and over I told Andrew that I wished we hadn’t come here. I knew it had been the right decision — I didn’t doubt that, no matter how closely I scrutinized it — but I hated the decision. I felt lost and uncertain and overwhelmed by all I had to do and all I had to be. And I was afraid. I was scared of having a baby without the friends who were like family in Wisconsin, and I was terrified of being officially faculty so suddenly, especially in this unknown lecturer territory and without an official degree yet to rest my laurels on.

What was especially strange about my fears was that, in practice, they were so often mitigated or unfounded. My siblings were only an hour away, and though I knew it was going to take some time to get into a rhythm with them again, they were here, helping us unpack and getting dinner with us and listening as I talked through my anxieties. And my colleagues certainly didn’t question my role as a lecturer or even realize that I hadn’t yet finished my dissertation. Certainly my students had no idea. So why the fear? At this point, all I can say is that it was likely the result of too much intense change too quickly. Despite all of the self-analysis I’ve done, despite all of my questions and praying and writing and thinking about why on earth I was freaking out so hard, I haven’t come up with any better reason than that.

But the freaking out is starting to fade. Slowly, slowly, a year and a half later, I’m not so paralysed by my fear. I don’t cry every day, for example (yay!). In fact, I’ve been enjoying teaching, and I’ve actually been excited about new opportunities I’ve had to find my place here. My role in my department, my approach to teaching here, my research, and my committee work have all started to take shape, just as my home life has. And the thing is, they aren’t exactly as I would have predicted.

There are many small ways I’ve been nudging the fear away, and I’ll talk about those next month, but so much of what I’ve done is, well, nothing. As with my garden, I’ve needed to give things time to reveal themselves. Had I been able to settle in more quickly, like I felt I should, I might have invested a lot of time in what turned out to be a weed anyway. By taking my time — not through some wise choice, but merely out of paralysing fear, mind you — I’ve been able to make better decisions about how I spend my time, about what is beautiful and glorifying and sustaining for me. So for now, I just want to emphasize the benefit of waiting the fear out, of waiting for the Lord more than the watchmen wait for morning, more than watchmen wait for morning.

Stephanie White is a member of the English Language and Literature faculty at the University of Waterloo in Waterloo, Ontario. She teaches writing and rhetoric while researching composition pedagogy and service-learning. She and her husband Andrew have a darling baby girl and very helpful neighbours.

Reflections
By Ann Dominguez
Breakfast on the Beach

A resident physician explores the intersection of her faith and her medical training in the face of a morally difficult situation.

Reflections
By Lauri A. Swann
Sleepless Nights: An Invitation to Stillness

Lauri Swann experiences holy stillness in the depths of night.