The Myth of Equality: A Discussion Guide 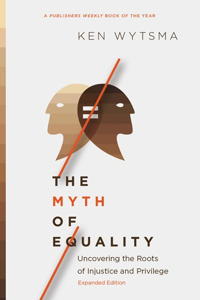 Do you struggle to understand the deep racial divisions in our country? Do you desire to know how our past shapes the present? Do you want a Biblical vison of how we can become a more just society and ideas for churches to become more multi-ethnic?

In The Myth of Equality: Uncovering the Roots of Injustice and Privilege, Ken Wytsma shows us how we got here by exploring the roots of racial inequity and how they morphed over time. He shows us how justice is a Kingdom value and calls us to model the diversity that God desires.

Ken is the lead pastor of Village Church in Beaverton, Oregon — a multicultural community in Christ known as the most ethnically diverse church in the most diverse county of Oregon. Ken also helped found Antioch Church in Bend, Oregon, Kilns College, and The Justice Conference — an annual international conference introducing men and women to a wide range of organizations and conversations related to biblical justice, which has reached over thirty-five thousand people with conferences in eight countries. Ken also served as the executive director of a creative office for World Relief.

Ken is the author of The Myth of Equality, Pursuing Justice, The Grand Paradox, and Create vs. Copy, and he is the coauthor of Redeeming How We Talk. He has written widely, with articles appearing in Relevant, Huffington Post, Church Leaders, Worship Magazine, and more.

The Story of Race

1. How do you respond to which immigrants were welcome and immigration policies of exclusion? What are you learning about automatic privilege associated with being White?

2. How do you respond to European nations’ ideas about Race and their religious justification for the conquest of foreign lands and people? What are your reactions to the post conquest racism experienced by Native Americans?

3. What is your response to the realities Black people faced after the abolition of slavery? How do you respond to laws & practices that created wealth for states, companies, and individuals on the unpaid labor of Black folk? How do you respond to drug policies in the 1980s designed to control the Black population?

4. How do you respond to the institutional racism that Black people faced especially in housing laws and policies? How might being prevented from owning homes and building generational wealth contribute to present socio-economic conditions within the African American community?

5. In what ways do the housing policies in the past and the drug policies in the 80s help us think about the way sin affects how we make our laws? What are you learning about how injustice can be legalized in our institutions depending on who makes the laws and why?

Equality and the Kingdom of God

1. Ken Wytsma states that even within the Church, our imaginations and consciousness have been formed more by the values of our culture rather than a Christian vision and that our aspirations of self-actualization are at odds with the Kingdom of God.

2. Wytsma gives us some reasons why many American White Evangelical churches find it hard to get involved in social issues.

If the Christian communities that you are a part of are uncomfortable to address matters of Race, why do you think that is? What have been your own struggles in trying to get conversations started? What might be some ways to help our congregations get involved in racial justice?

3. How does the privatization of our faith fail Jesus? Is the Church’s vision of God too small? How can we contribute to a broader understanding of following Christ?

4. Consider the implications of Creation — all people groups bear God’s image equally. Consider the Body imagery used to describe the Church — believers belong to a multiethnic family of equals. How do these realities encourage you in your own commitment to pursue racial equality?

The Challenge of Privilege

2.How do you respond to Wytsma’s ideas in chapter 10 on power sharing /giving up power, so that POC are represented in Christian leadership contexts? What idea/reality stood out the most to you? What other ideas can you practice in the communities you influence so they become more just?

3.What structural sins/systemic injustices do you notice? How can Christians get involved in forming a more just society?

Do you struggle to understand God’s love amidst pain and suffering? Vinoth Ramachandra shows how God’s own heart of suffering allows us both to lament and to have hope.

In Focus
By Jasmine Obeyesekere Fernando
Book Clubs with WSAP: A Snapshot

Curious about our book clubs? Take a peek at this description of what goes on in our meetings.

Interested in leading a virtual book club? Read our guide for tips on getting started.

Listen in on our book club conversation with author and professor Dr. Christina Bieber Lake where we discuss thriving in academia — even during a pandemic.