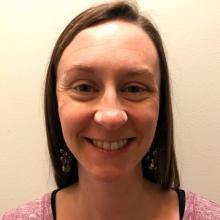 Kate Denson is a proud DC transplant married to a native Washingtonian. She's lived in Washington DC and been on staff with InterVarsity since 2007 serving primarily as the DC Urban Programs Director with some time as campus staff at both Georgetown and George Washington Universities. Kate graduated from the College of William and Mary with a BA in sociology in 2007 and received her MA in theology from Fuller Theological Seminary in 2016.

Kate has developed a robust "side hustle" as a tour guide, now focusing mostly on justice oriented tours through her small organization called DC Justice Tours. She's been married to JR Denson since 2013 and they have one son Alexander Douglass Denson named for a few DC greats — Alexander Crummell and Frederick Douglass.