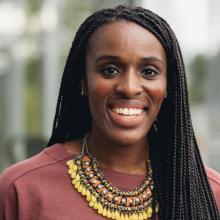 Lakeya Omogun, PhD is an Assistant Professor of Language, Literacy, and Culture at The University of Washington. She is also a creative writer and speaker. Her artistic nature is infused in all her roles, which have one common goal — to shift static ideas about identity.

Her hybrid identity as a Nigerian and Black American coupled with her experience as a former middle school teacher influenced her current research project, which explores Black African immigrant youth schooling experiences in the United States. She focuses on how their new experiences with race in America (re)shapes their identity, language, and culture.

Her creative writing and public speaking have fostered public conversations and social impact in relation to identity and race, reaching over 180,000 readers and listeners. She has been featured in ESSENCE Magazine and ZORA Magazine. She has also spoken on TEDx and NPR.

Outside of work, Lakeya loves to visit her favorite people and new places. She enjoys hitting the gym or going for a peaceful walk. When she is not on the move, she is either trying a new recipe or slowly moving through a TV series. She likes to think that she has mastered anti-binge-watching shows. In fact, she considers it an art.

Lakeya Omogun followed God's invitation to pursue a faculty position despite concerns about the emotional costs that Black women experience in academic settings.