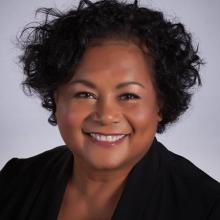 Terumi Echols is president and publisher of InterVarsity Press (IVP). She joined IVP in December 2017 as director of finance and fulfillment operations. In that role she managed the annual budget and oversaw the finance, accounting, distribution center, customer contact center, general services, and facilities teams.

Before coming to IVP, Echols worked for nearly two decades at Christianity Today International, most recently from 2014 to 2016 as the executive vice president and chief publishing officer, and as executive vice president and publisher from 2012 to 2014. While she was at Christianity Today, Terumi championed new product lines, diversified the list of contributors, and increased revenue.

Terumi graduated from Chadwick University with an MBA, is a member of the Illinois CPA Society, and received a certificate from Yale University School of Management on Publishing Print and Digital Media.

Join us for this conversation with Terumi Echols, newly-appointed president and publisher of InterVarsity Press, as we discuss her career path, her family life, and her vision for the future of IVP.