When Kelly Arispe first dreamed of becoming a professor, she hoped to follow in the footsteps of the mentors who had so deeply enriched her own college experience. As a nineteen-year-old student fresh from the safety of her parents’ home, she had stepped onto a small, private Christian college campus, hardly aware of how much she would need strong mentors in the academic environment.

“The goal of college professors is to challenge you to think,” Arispe says, “but often it can be a very confusing time as one’s deeply held beliefs and norms are shaken. It’s a ripe opportunity for professors to be agents of change, and to help students arrive at a new understanding of themselves in a safe place.”  Arispe speaks with tenderness of two professors in particular who took her under their wings. They encouraged her in class as a student, but also mentored her outside class as she stepped into nascent adulthood.

Arispe has taken on her mentors’ mantle in her position as Assistant Professor of Spanish at Boise State University. Now in her second year as a tenure-track academic, she speaks passionately of the joyful privilege of being a professor. She strives to present an openness to all her students in the classroom, and each year there are a handful who take her up on the invitation to connect with her personally.

She describes these special relationships with excitement and a deep sense of joyful responsibility. Over the years she and her husband, who is also a tenure-track academic, have had opportunities to share meals and to walk with students through personal loss, family trauma, eating disorders, and crises of faith. “I see myself as planting a seed,” she says. “It’s exciting to see where their lives lead and to have had a chance to help them along their journey.”

“There are so few Christian professors, especially in the humanities and arts,” she says, “and we NEED strong Christians in academia.” Working in a secular environment where she is not free to mention her faith in her job, she is acutely aware of the questions and at times outright mockery of the Christian faith which occur in academic settings. “There is a bedrock belief that anyone who is a Christian is just not smart,” she says, “but we need people of faith who can maintain their faith in Christ alongside an academic, intellectual perspective.”

Arispe is hungry for the fellowship of other Christian professors. She observes the great need among students and fellow faculty for credible believers with a robust faith and the ability to have hard conversations with a compassionate heart. She smiles as she recollects a few instances where she has been able to mention her church in passing conversation. “I am so proud to be part of a church which does irrefutable good in our community. We so desperately need a credible witness in every sphere of life.”

Arispe pursued academia hoping for mentoring opportunities with students and has been surprised at the relational richness and opportunities with fellow faculty members. However, one of the serendipitous surprises of being a professor has been beyond the realm of relationship-evangelism and lifestyle-discipleship. Indeed, as Arispe has sought to serve God as an academic, it has been thrilling to discover that God isn’t just working through her relationships with people, but specifically through the subjects she teaches.

“Do you think you could have been a professor of anything and still had this kind of impact,” I asked her in an interview, “or do you think there is a specific reason God gave you a passion and ability for Spanish linguistics?” I was hardly prepared for the enthusiasm with which she replied — eyes widened, words coming faster, passion evident.

“Spanish linguistics is incredibly missional and purposeful,” she explains. “It changes students’ perspectives and gives them compassion as they view the world.” One of her classes is entitled “Language and Identity,” and Arispe sees her classes as a real opportunity to be a megaphone for reconciliation and cultural peace-making.

“Language is not separate from identity and culture. The way we (or others) speak is a primary way of assessing how we perceive and judge people. We form prejudices and make judgments about people’s education, class, and intelligence based on the way they speak. These prejudices run deep within Hispanic communities, too.” 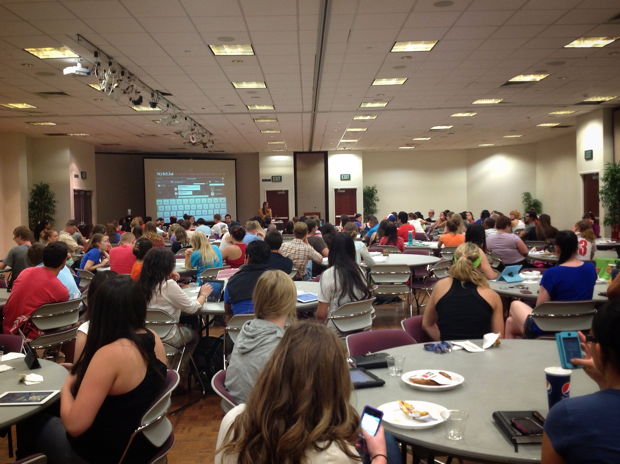 In one of Arispe’s classes, she has students trace the history of the development of the Spanish language, noting how historical and geographical influences impacted the evolution of regional dialects. They study how the language spoken both reflects and shapes identity, taking into account social factors, dynamics, how gender and age invariably affect the language we use (yes, women and men actually speak differently!), and other fascinating phenomena including how language evolves as one transitions into the work force.

These classes are not just academic though. Arispe describes how she can “see the wheels turning" as students identify with the material and find themselves saying, “That’s me! This phenomenon I am learning about . . . it describes me!”

Arispe’s class is profoundly good news for the many students who have experienced shame about being Hispanic — students who have been the victims and also propagators of prejudice that a certain type of spoken Spanish means they are rural, or poor, or stupid. Being ashamed of how you speak is integrally tied to being ashamed of who you are, and Arispe is passionate about communicating this message to her students. “Don’t be ashamed of how you speak! Value that, and find a way to see that there is a history to your Spanish. Yes, learn the academic register, but understand that your Spanish has a place too, and you need not be ashamed of it.” Arispe treasures the end-of-course evaluations and presentations where students have sometimes tearfully recounted what a healing and redemptive impact her classes have had on them.

This topic is more than academic for Kelly Arispe. Born and raised in California, she was a white, English-speaking kid, but her great-grandmother was Hispanic. “Being Hispanic in the 50s and 60s was not a good thing,” says Arispe. “She married an English-speaking man and quickly assimilated into his culture. It was easier that way at the time.”

Years later, Arispe found her own way into studying Spanish, but the issue became intensely personal when she married a Hispanic “heritage speaker” — a man born to Spanish-speaking parents, but who was raised and educated in the power language: English. Heritage speakers find themselves in something of a cultural no-man’s land; they are not “Hispanic enough” for their family, and not “English enough” for their community. 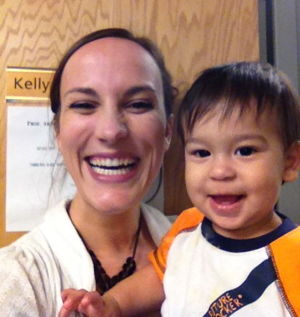 Arispe’s passion is to empower and encourage students through education, and she’s putting her beliefs into practice with their first-born son. She and her husband have chosen to speak Spanish exclusively to him, knowing that he will still learn excellent and enriched English from the world around them. “We want him to be proud of who he is — part English, part Hispanic,” she says. I have no doubt he will be.

In a myriad of unexpected ways, I see Arispe’s little office in the Spanish department on a state school campus as a shining outpost for the Kingdom of God. For more than the influence on her son, more than the handful of students she and her husband build personal relationships with and mentor, more than the faculty members she loves as friends, Arispe stands in her classroom day by day and upholds a message which reflects the gospel to every student in her class.

Arispe may be teaching Spanish Linguistics, but class by class she is undoing the effects of the tower of Babel. Prejudice is sin, and she is equipping students to build bridges across prejudicial precipices. Forging relationships across language and culture is an expression of the gospel which teaches us that Christ has broken down the “dividing walls of hostility and brought us peace”(Ephesians 2).

Yes, he has. And day by day, Kelly Arispe’s presence on campus embodies a gospel which looks forward to every nation, tribe, and tongue standing before the throne. The Hispanic Hallelujah is a holy one indeed.