In Focus
By Joyce del Rosario 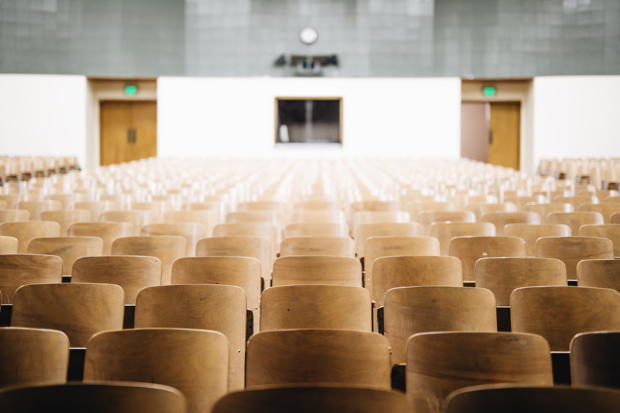 I remember standing in front of the new students as the faculty were getting introduced. I had recently started my first appointment as an Assistant Professor of the Practice of Ministry at Pacific School of Religion. I stood in a line along with my new colleagues and found myself in an internal frenzy. “How do I introduce myself?”

The idea of being called Dr. del Rosario was one that I wrestled with for a full year until I became more comfortable. I went from being a graduate student hunting the campus for post-event meals (no shame in my free meal game) to a professor. Introducing myself as anything other than Joyce was a new concept for me. I hadn’t gotten married so I hadn’t had the experience of taking on or sharing a name with a partner. I was always just "Joyce.”

Back to that first introduction: I whispered to another junior colleague and asked, “What will you have them call you?” We had discussed this previously ad nauseum, but all the way until the moment I was about to introduce myself I had conflicted feelings around how I wanted the graduate students I would soon be teaching to address me. My Latina colleague decided to let her students decide what to call her. Her thought was, “It’s colonizing to force them to address me as Doctor.” This made sense to me, although I wasn’t sure that was the route I would take.

A few months later, my colleague admitted that she regretted allowing her students to choose rather than self-identifying. She realized that while most students called her Doctor or Professor, the white women in her classes chose the more familiar address of calling her by her first name, addressing her as a peer. This brought up all sorts of power dynamics in the classroom that she wasn’t sure how to address — especially now that they were already permitted to address her on a first-name basis. On one hand, she appreciated the effectiveness of her decolonial practice to have everyone be addressed equitably. First names seemed fine. But on the other hand, she realized she did in fact feel a certain way being called by her first name by white women.

Our privileges and margins are exposed when we encounter these moments. As the person in power — “Professor So-and-So” — it seems equitable to be addressed in the same way as the students. As a marginalized being, that same power is interrogated by the other power differentials present in the classroom: gender and sexual orientation, race, ethnicity, language acquisition (or perception of lack thereof), and ableist assumptions.

A white cisgender heterosexual male professor may want to be called by his first name to remove the hierarchical barrier between him and his students. But what if we enter the classroom with more barriers than our roles? I am just under five feet tall, brown, and female. I often get overlooked ... literally. I have had people speak right over me to the person behind me not recognizing my presence in front of them. At one point in my doctoral life, I bleached all of my jet black hair and had it colored lilac, then bright blue, then layers of teal and blue. I was done with being unnoticed.

For those of us in the marginalized intersections, we can feel ambivalent when considering how to be addressed. On one hand, many of us believe in equity and leveling out the playing field, but  on the other hand there is an actual power dynamic between professor and student that needs to be recognized.

I used to give a spiel before each of my classes. I would say that if they never had a Filipina professor, now is their chance to recognize one as Doctor. Or I would acknowledge my ancestors and say calling me Dr. del Rosario was a way to honor those in my family who for the four centuries of colonization did not have a voice. It was a pre-written paragraph that I would reel off at the start of all of my classes.

I prefer to be addressed as Dr. del Rosario. Women professors are often called by their first name or maybe Dr. Joyce, while our male colleagues are addressed with their formal surnames and titles without question. As a matter of equity with my male colleagues and recognition that we did the same work to get here, I prefer to be addressed as Doctor. In addition, it is a way of celebrating my Filipino ancestors who were colonized by the Spanish for 350 years and then by Americans. When you call me Dr. del Rosario, you celebrate with me, their resilience and efforts so that I could become who I am today. If you have never called a brown woman Doctor or Professor, this is your opportunity to do so now.

Whew! I hadn’t even gotten to the syllabus and I was winded by justifying why I wanted to be addressed in a certain way in the classroom.

In one class, a wise student reminded me that I do have a voice and it is because of the resilience of my ancestors that I could be where I am today. So now I simply let people know I prefer to be called Dr. del Rosario amongst students without much justification. I can tell it irritates some people as my last name is difficult to pronounce. Even my Spanish speaking students sometimes trip over saying my name even though it is Spanish in origin. I know that what they trip over is really the idea of having to call me by such a formal name when my demeanor and manner is approachable and relatable.

I do not make concessions and offer that students could call me Dr. Joyce or Dr. D as a shortcut. Apart from the 80’s connotations of another Dr. Joyce, I would rather have them call me by my full surname than any shortcuts or compromise. My degree was in no way a compromise. My ancestors are not a compromise. My colonized name is a remnant scar of a history that I choose to carry with me as a reminder. I have called countless male professors by their formal titles and names without hesitation, even those with difficult-to-pronounce names.

My final reasoning for having students call me Dr. del Rosario —I also request colleagues to refer to me this way in the presence of students — is that I want to embody for other women of color what they too can achieve in academia. Women of color in academia are a very small percentage of total full-time professors. Even fewer still (in Western institutions) are the numbers ofunder-represented ethnicities like mine. When students call me Dr. del Rosario, I have now normalized a classroom experience for them to have a brown woman teach their doctoral, graduate, and undergraduate classes. So while I enjoy teaching with a peer learning pedagogy, yes, it is Dr. del Rosario, actually.

Photo by Nathan Dumlao on Unsplash

Joyce del Rosario previously served as Assistant Professor, Practice of Ministry at Pacific School of Religion. She now serves in an administrative role as the director of Multi Ethnic Programs at Seattle Pacific University, serving BIPOC and first generation college students. She also teaches at Northwest Nazarene University and Fuller Theological Seminary. On the days she's not grading something, she enjoys spending time with family and friends all along the West Coast.