In Focus
By Margot Starbuck 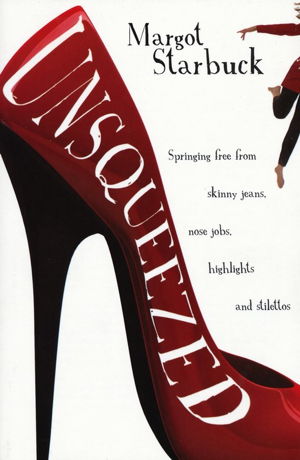 The other evening I was walking through my neighborhood when a friend, who teaches ethics at Duke Divinity School, spotted me just as she was opening the door to welcome a dinner guest.

“Margot!” she shouted. “I was just thinking about you!”

Hollering across the street, she continued on to describe how she had been scurrying around the house, scrambling to clean it up for weekend guests. Finally, she explained, she had stopped in the middle of all the frantic cleaning and said to herself, What would Margot do?

You read that correctly. The Duke University ethics professor asked herself, What would Margot do? I can almost see it now, imprinted on a neon rubber bracelet. For a nanosecond, I felt special and fantastic. Possibly a little holy.

As soon as my brain was able to process what she was saying, though, I felt less fantastic. What she was actually saying was, If Margot had company coming over to her messy house, would she clean it up? No! She wouldn’t bother! That lazy gal would just let them walk in on the usual visual chaos in which her family lives every single day. I deduced, from my friend’s happy smile, that I had just inspired her to mediocrity as well. I do what I can.

Though the neat freaks are probably horrified, I suspect the slobs secretly relish coming to my house.

It’s the same with bodies. We blather on, “Sorry you have to look at this head; I’m having a bad hair day. A bad hair month. When I’m having my period, I get all these zits. Do you like my muffin top? I’ve got to start working out. Does my butt look big in these jeans? Ugh, I hate these thigh dimples. I didn’t used to have these . . .”
Isn’t it just exhausting?

We leave no room to notice and welcome others when we ramble on and on about our particular disappointments with our appearances. Not only that, but as we do, we reveal to other women what it is we value. We may not mean to, but we do. When we bring it up, we confirm that we agree with the world’s valuing of us and, ultimately, we agree with the world’s valuing of them.

A friend of mine teaches at a local university. Having decided that the way God had made her was good, this vibrant black woman wears her kinky black hair “natural,” choosing not to straighten it or wear hair extensions. She confides that a number of her students have approached her privately to learn more about her decision. Though also inclined to go “natural,” these young women, who are entering the ranks of professionals in the academy and the business world and the church, fear that such a decision will negatively affect their career options.

The message that my professor friend sends, with her quiet choices, is that what God has made is good. Really, you don’t need a PhD to model this stuff. Each one of us has the power to influence other women and girls. As we reject the world’s hiss that we’re not good enough, we proclaim a message of freedom for others caught in the world’s sticky Cover Girl web. As you decide to accept your body as good, you give other women permission to do the same. I don’t mean that in some idealized dimension other women might possibly notice and then maybe try being okay with their bodies. I mean that this is precisely where the rubber hits the road today. This is exactly the point at which a gospel of unconditional acceptance is being realized on campuses, in boardrooms and in the marketplace.

All of us who have the opportunity to be leaders of women, role models for girls and friends to our friends owe them this much. (If you don’t find yourself in that list, you’re just not paying attention.) This morning I was absolutely delighted by when I found an online photo of a woman who happens to be a popular Christian speaker. In the picture she was looking particularly . . . real.

“Hooray!” I hollered, to no one other than myself. I felt so happy that she looked like people really look, with the hair and the face and the outfit and the body. The fact that I know other women are already looking toward her, because of her professional role, made me imagine her as sort of a superhero woman who liberates those enslaved to hair dyes and diet pills and overly pricey shampoos.

If I ever see her in person, I sort of want to go up and hug her and tell her how thrilled I am that she looks so normal and not particularly fantastic. In fact, what I really want to do is give her a trophy. And others like her. I’d like to establish the annual “Keeping it Real” awards for daring women who bravely break out of the world’s mold. It would be sort of like being crowned Miss America, only more like Miss Not-America. Maybe instead of a crown I could just give out a sparkly baseball cap to hide the bad hair.

The first year, I imagine, these awards might not carry a lot of prestige. But what if it caught on? What if high-profile women, and low-profile ones, even started competing for it?! One day they’d skip the lipstick, the next month they might miss an appointment to touch up their roots. Before you know it, they might even switch to wearing sensible shoes. Can you imagine People magazine featuring a pair of women, dressed in the same comfortable outfit, and instead of a caption demanding “Who wore it better?” it would read, “Who kept it real?” Before you knew it, we might have any army of women walking around looking like we really look.

The first person I’d nominate would be my friend Constance. As part of the True Beauty campaign, she went a month without makeup, posting a new plain beautiful photo every day on Facebook. I have to believe that that radical little experiment did more to help women than all the unbelievable reassurances in the world that God doesn’t care how you look.

I’m of the mind that this sort of thing needs to happen more often than it does. Girls and women need role models who walk the talk. I don’t just mean women who speak in front of thousands at Women of Faith conferences or ones who strut down a Parisian catwalk. We need to lay eyes on teachers, bus drivers, doctors, accountants, pastors, mothers, custodians and clerks who set us free by keeping it real.

For more of Margot Starbuck at The Well, see Our Father in Heaven.

Margot Starbuck, a writer and speaker, is the author of the spiritual memoir The Girl in the Orange Dress: Searching for a Father Who Does Not Fail (InterVarsity Press, 2009) and Unsqueezed (InterVarsity Press, 2010). Her writing has also appeared in Radiant, Neue, Rev!, and Today’s Christian Woman. Margot lives with her family in Durham, NC. You can learn more about Margot at her website.

Voices
By Colin Fagan and Brian Pugh
Dad at Home

Men share their experiences of being the primary caregiver in their homes.

As we emerge from the pandemic, many of us are asking, "What just happened?" Kathy Tuan-MacLean and Tara Edelschick explore the spiritual formation that took place during the past 18 months.