On Returning the First Essays of the Semester: Standing Firm in Love

I will praise the Lord, who counsels me;
even at night my heart instructs me. (Psalm 16:7)

Last night I woke up and lay awake for hours, unable to fall back asleep. I had been suffering from a cold for the past few days, a bad one, and upon awakening made the delicious discovery that the congestion in my nose and chest and the irritating tickle in my throat were gone. Partly it was the air itself that delighted me: finally able to get through all the mucous, it was fragrant from the night and felt like warm ice moving through my sinuses and bronchial tubes. Partly, though, it was the pleasure of discovering that God had once again been listening to my little babbled prayers. Let me get over this cold. Take it away from me. Make me well.

Florence Nightingale, who, in addition to being the famous mother of modern nursing wrote voluminously on her Christian faith, once noted — with some smugness, I think — that true mystics never said prayers of petition. But I do. There’s no pleasure like daring to ask and being given.

Indeed, I was so enthralled by these gifts — the sweet air, the gratitude — that I should have fallen straight back to sleep, but somehow I got to worrying about my English 101 students. I had given back their diagnostic essays the day before. I go to great lengths to be especially fair and lucid in my response to this first sample of their writing and give them a 100% on it, regardless of the state of their writing at the start of my course. Nevertheless, upon reading my comments and seeing the grade they would have gotten had this not been a diagnostic essay, they had changed in an instant from liking me and finding me funny to hating my guts. 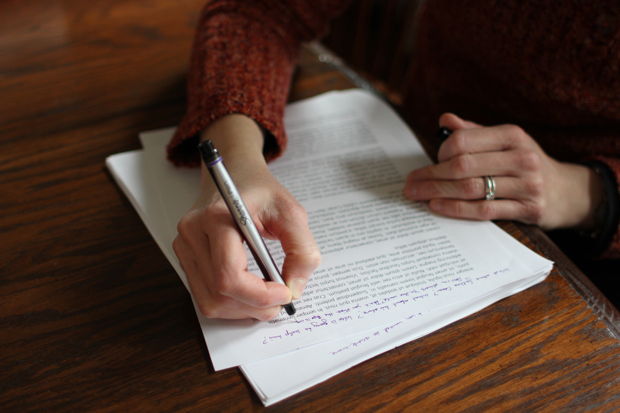 Every semester, at this time, I reconsider this whole business of grading papers. On the one hand, despite all the scholarship to the contrary that one of my colleagues says proves that students never read what teachers write on their papers, I’m certain that the only way for them to improve their writing is to get an honest response.

This doesn’t make sense, I scribble in their margins. You sound pompous. You’re boring me.

On the other hand, though, every studiously dropped face and angry thrust of the shoulder when I squeeze by to read my handwriting on someone else’s paper cries out discouragement, and I am stricken. Lift them up, I hear those New Testament sages exhorting me, and for weeks after returning that first set of papers I am weighed down by guilt and an overwhelming consciousness of my own meanness.

Don’t get me wrong. I heard those voices as I graded too and as I made my syllabi and planned my classes and argued once again, at our last department meeting before the new semester, in favor of students being held strictly accountable for usage and form in their writing as well as critical thinking. But — lift them up, the voices told me. Encourage them. Nudge them gently forward. And I took care to make positive remarks on their papers and begin each summary assessment with praise of what was good about the essay before going on to detail where work was needed.

But they don’t seem to notice my encouraging remarks at all. Comically, these tend to be the comments they find hardest to read, and when I bend to decipher, they never look pleased to find out it said Dynamite! or Great point! One student yesterday even thought I was being sarcastic.

So, deep in the night, my sleep-blessed husband enjoying the night air beside me, I pondered my students’ outrage and my meanness. Am I wrong to grade so hard? Is there no other way? Why do I care so much if they like me? I reminded myself in vain that most of them would quickly progress and eventually like me again, but it was those angry ones who wouldn’t — who would steadfastly refuse to progress, who would steadfastly refuse even to put a comma before a coordinating conjunction joining two sentences and as steadfastly continue to despise me — that kept me awake. How could I grow them as writers without acknowledging their areas of weakness? How could I be honest without hurting them? I lay hating myself, my power to hurt, my ineptness in encouraging, my crazed desire to make writers of them, every one.

Some of my friends would call my night worries spiritual warfare, but I know God loves me and promises me the sleep I need. In fact, I eventually fell asleep and woke up more refreshed than I have felt in many days. My cold was gone, my daughters were in a good mood, and, even though the skim milk I always have on my cereal had gone sour, I felt excited about the day before me and calm.

And so, it seems, God has been counseling me in the night, telling me what he knows as a parent and has told me time and again with respect to my own children: Stand firm in love.

“Like me,” he says, “you will suffer their anger, and they will see your teaching as a desire to punish, your truth as an affront. Daily they will ignore your mercies and your encouraging words. They will, in short, hate the open hand you extend to them, and you, like me, will love long in vain, suffering sometimes years, sometimes a lifetime of disdain, before their names are but entries in some forgotten grade book.”

I thought of my youngest, Lulu, when I correct her or do anything she doesn’t like. She gets so angry she won’t talk to me. In babyhood she made pronouncements like, “I don't even love you as much as half a sneakbug,” which was a made-up creature of microscopic size.

Not long ago, when I accidentally put her smelly sneakers in the wash right before she left for soccer, she told me in her rage, “Mama, I will not let you come to soccer practice with me ever again.”

“As if I’m dying to go sit with a bunch of women I don’t know and watch a bunch of children practice moves that make no sense to me,” I thought of retorting.

And yet, her words cut me, and I said a little prayer that this disaster wouldn’t ruin her practice and her evening with her dad, who is the assistant coach. And then, hours later, she returns home proudly wearing a pair of out-grown, hand-me-down cleats that someone happened to bring along to give away, just her size, and Big Sister doesn’t even have cleats, which makes them even more precious, and she made a goal at practice, and she’s so excited she climbs up in my lap to love on me, forgetting all her promised punishments.

God is so amazingly generous. I ask, he gives. Just like that. I worry; he counsels me in the night. He molds my very heart in his hands and instructs me in his ways.

This essay has been published in Confessions of an Amateur Believer, chapter 31, “On Returning the First Essays of the Semester.” Used with permission. Patty's book, The Easy Burden of Pleasing God, will be published by InterVarsity Press this spring in their new line of books, Crescendo.

Carmen Imes offers a simple prayer for professors to use as the season of teaching and study draws to a close.