The Gift of Contradictions: Jen Michel's "Surprised by Paradox" 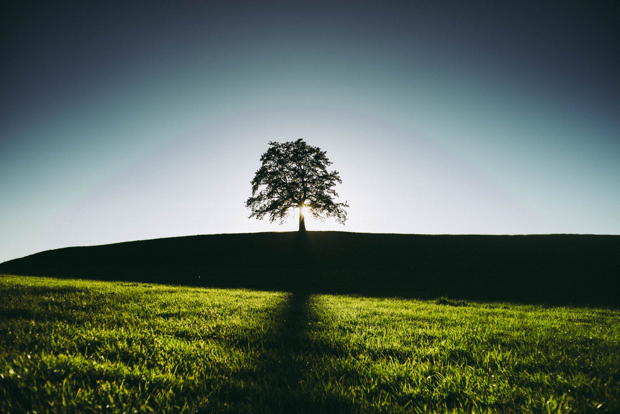 The Christian faith is built on paradox: God became man. And from that fundamental truth, more paradox abounds. In fact, it’s difficult in Christian thought to move from one tenet to the next without confronting these essential and mind-bending realities.

Our responses vary: We might simply assent and move past them. Faith is faith, after all. Christ was born of a virgin. Perhaps acceptance of this mystery and others like it enables us to absorb the paradoxes of our faith.

Or we might contend with them. Pondering even one paradox can consume our faith practice. It can become the lens through which we wrestle with and begin to understand our faith.

It’s been a bit of both for me; but lately, when I think of the paradoxes of Christian faith, I wonder how they appear to those on the outside. How inviting is it — in a society prizing fact, proof, and empirical support — that we offer the God-man, a kingdom like a seed, strength in weakness? In this context, Christianity could seem atavistic, a relic of pre-Enlightenment thought.

Yet it also occurred to me that it might be otherwise: when talking about Christ with those who don’t believe, we can’t fairly gloss or shirk these mysteries. To do so is to deny the intellect of our friends in the conversation, and it is also to deny what God has declared about himself.

I’ve wondered if a willingness to not only concede but embrace paradox — to open our eyes wide to the true mysteries of our faith — might actually be the embodiment of that weakness-as-strength. Honest exploration of the seeming contradictions of Christian faith might open us — both believer and non-believer — to genuine encounter with the living God. 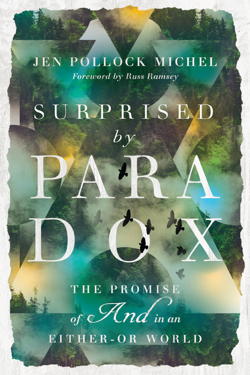 So when I saw that Jen Pollock Michel was taking on this topic in her new book, Surprised by Paradox, I was both impressed and excited. Impressed because of the boldness: how would an author tackle this multifaceted and complex subject in a single volume? And I was excited by the author: I’m coming to know the incisive clarity of Michel’s thought and writing. How would she treat this complexity?

Michel is wise from the outset. Rich confrontation with all of the paradoxes of Christian faith would likely fill multiple books. What she offers instead is her own wrestling with paradox and the fruit of her own Scripture-study; an honest and unflinching gaze at these truths and the ways in which she has grappled with them; and ultimately — and this is the best part — a motif of praise to God: that he offers us “the Promise of And in an Either-Or World.”

The book’s first part explores the incarnation, that fundamental paradox of our faith. In an increasingly dualistic world, the incarnation inaugurates the “And” of the book’s subtitle. Moses’ bush was not consumed by flame, and by grace, the fearsome sight did not repel but instead drew the shepherd to it. But this shepherd-become-leader of the Exodus was never permitted to see God’s face. Instead, the world was shown that face in the God-incarnate Son. The grand revelation that was not granted to Moses was instead played out in profound humility: a humble birth, an itinerant life, a shameful death.

Michel then shows us that incarnation continued. Our small selves, the sojourn of our brief lives can also be the means by which God proclaims the resurrected Savior. “It’s a paradox,” she writes, “that my story, that your story, could be a way of proclaiming the bigger, grander story of God.”

A study of the kingdom is a natural segue from that of incarnation. Here, Michel boldly engages common idols: politics and wealth. The kingdom of heaven, she argues, presents us with an upside-down view of both — and once again we recall the strength-become-weakness of the incarnation. She highlights Christ’s parable of kingdom-as-seed: frail, vulnerable, potentially lost. And yet she calls that same seed “virulent,” a word evoking contagion and infectious growth. This kingdom, presenting in weakness, wields extraordinary power, and it grows in unexpected ways, especially through suffering.

By those lights — and for those us well-attuned, at least in theory, to that paradox — we anticipate a kingdom view of wealth: the poor inherit the kingdom. But Michel opens the door onto an oft-neglected paradox-within-the-paradox: God’s kingdom “can be enjoyed by the poor and forgotten and also the rich and the comfortable.” Her careful exploration of this theme reminds us of the transitory nature of wealth, of the responsibility of those who have it, and the open arms of God, who welcomes all who are poor in spirit, no matter the size of their wallets.

This primes us well for the book’s next section, grace. We can no more earn our way into the kingdom through poverty than we can through wealth: all is grace. And this grace has been evident from the outset. In what is perhaps one of my favorite moments, Michel points out God’s extraordinary beneficence in the Garden of Eden. While we tend to think of that Garden’s restriction, it was from the outset a wide gesture mirroring God’s love for the world, “a grand and glorious invitation: indulge yourselves! ‘You may surely eat of every tree in the garden!’” We see God’s extraordinary generosity, ultimately demonstrated in the terrible justice and mercy of the crucifixion.

And that justice and mercy compel us. We are indebted to our merciful God by his sacrifice, and where we would anticipate rules to follow, we instead have grace. Michel reasonably asks what this means. It’s a paradox, she says, that we never earn grace, no matter how carefully we abide by the rules. Yet the freedom that grace offers us is a paradox: because of that grace, God’s law is indeed ours to follow — something we can do only by grace.

I think it’s fair to say — although somewhat paradoxical, perhaps — that God’s welcome of our lament is also an extension of his grace. And it’s the book’s final section on lament that I found most compelling. To be alive on this planet is to know suffering, great or small. But to lament — even to complain — to God seems like an affront, at best. Yet, paradoxically, we are invited to do so. She asks, “How is it that beating our fists against the chest of God can be a great act of faith?” Michel argues that we must, that lamentation demonstrates trust.

Is that true?  This extraordinary paradox opens us anew to the actuality of God: that he is, that he hears; that in hearing, he listens. Michel points out that in our very complaining to God we are returned “to our prelapsarian state of candor, if not to our former innocence.” Paradoxically, suffering from the brokenness of the world opens us to genuine conversation God. Perhaps this is some answer to the argument made in an earlier chapter: the kingdom grows through suffering. In our lament, in our honest cries to our Father-God, the space between us closes by degrees: we are drawn further back into intimacy with him.

And lament opens us to who He is. The world is not random, is not chaos. It is instead presided over by the sovereign, holy God whose love endures forever. We may bring him our lament, our need, our complaint precisely because of that gracious love. We may not know his answer in the moment, but the lament is heard, the suffering alleviated because he is the same one who longed to gather Jerusalem into his arms, and he is the one who also longs to gather us to himself.

Throughout the book, Michel turns our faces to paradox, but the book’s greatest accomplishment is that, in so doing, she turns our faces to God. Each paradox is an invitation to see his character and, as such, is not to be overlooked. I heartily commend this book to believer and non-believer alike for a joyous celebration of the mystery, wisdom, and beauty of God.