In Focus
By Sandra Glahn

And all shall be well and
All manner of thing shall be well
When the tongues of flame are in-folded
Into the crowned knot of fire
And the fire and the rose are one.

Thus T. S. Eliot ends the final “Little Gidding” section of Four Quartets -— the last poem in what is arguably the greatest literary achievement of the twentieth century’s most influential poet. In the concluding sections of “Little Gidding,” Eliot uses the phrase “all shall be well and all manner of thing shall be well” three times. He borrowed it — and others — from English medieval anchoress Julian of Norwich. 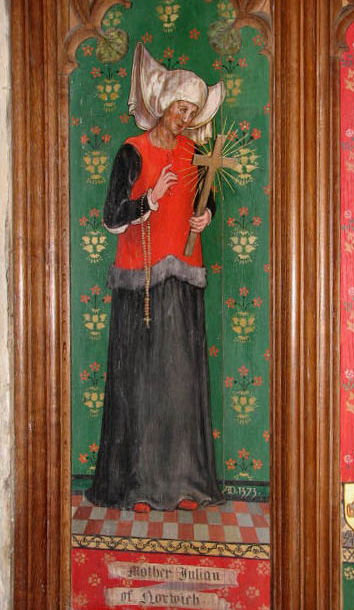 According to Julian’s own account, when she was thirty, she became ill. As she lay dying, she had a series of sixteen “shewings,” or revelations, about God, the Trinity, and the crucified Jesus. Afterward the fourteenth-century mystic recovered completely and recorded her experiences.

Julian’s Sixteen Revelations of Divine Love, known today as Revelations of Divine Love, was the first English book known to be written by a woman. While this accomplishment may seem significant today, in Julian’s time English was merely a local dialect. She — like most women then — was unlearned and sought to live in relative obscurity. In fact, she may have had to learn her ABCs before she could even record her “shewings.” After she did so, her work remained unpublished until 1670.

About six hundred years after Julian lived, T. S. Eliot chose to quote her. That she was from England and a woman influenced his choice as he drew on mystics from his adopted country’s past. And hers was a credible voice, having gained the respect of even May Sinclair, the critic of modernist writing to whom we attribute the term “stream of consciousness.” Sinclair disliked Christian poetry, claiming it was neither written by poets nor supremely devotional.

For twenty years Eliot desired to prove Sinclair wrong, and in Four Quartets we see his deepest attempt. The statement that “all shall be well” is the summary of Julian’s entire experience. Her optimism is not one of positive thinking, but is based on an eschatological hope. Eliot shares her view that the One who can make even humans killing the God-Man into the still point of history can turn all lesser evils into good. Thus, “all manner of thing shall be well.”

The words take on particular significance when viewed against the backdrop of Eliot’s circumstances. A fire warden during World War I, he witnessed bombings and violence as everyday experiences. The evil around him demanded an explanation. And Julian’s conclusion became Eliot’s refrain. The basis of the wellness of which she speaks is her belief in Christ’s power to renew all things to their original “making.” In reading Eliot’s preconversion poems, such as The Waste Land, one wonders if he even believes in hope. But by the time he has penned the Four Quartets, well after his conversion, the poet has clearly come to affirm a hope of cosmic proportion — one that ultimately transcends time, sequence, geography, and history.

So the great modernist Nobel-winning wordsmith ends his masterpiece with the words of a humble, virtually illiterate medieval woman. Both witnessed overwhelming ugliness, brokenness, and suffering in the here and now. Her century saw plagues; his saw the wars. Though separated by six hundred years, their voices can and do affirm in unison the hope in Christ that all shall be well and, indeed, “all manner of thing shall be well.”

Sandra Glahn is an adjunct professor in Christian education and pastoral ministries at Dallas Theological Seminary. From “A Faith and Culture Devotional,” by Lael Arrington and Kelly Kullberg (Zondervan.) Article also published online at http://www.findinggodat.org/. Excerpt from “Little Gidding” by T. S. Eliot. Glahn is editor of Kindred Spirit magazine and author of Informed Consent as well as the Coffee Cup Bible Studies series.

Book Clubs
By Jasmine Obeyesekere Fernando
The Myth of Equality: A Discussion Guide

Interested in learning why we are a racially divided country? Ken Wytsma shows how our history impinges on the present and our role in reconciliation.

In this second segment of a two-part interview series, economist Diane Schanzenbach talks with us about eHarmony, marriage, and family life.

Karen Swallow Prior shares the content of one of her favorite lectures.