In Focus
By MaryKate Morse

In Focus: The Yeast Factor

Lucy sat across from me sharing her struggles in a denomination where women did not lead or teach men. She was well-liked and given more opportunities to influence than any woman before her, but she felt restless because of the unfairness of it all. She yearned to preach and teach and be taken more seriously as a leader. Lucy believed she could help the church fulfill its mission, if the pastors and elders would only give her a chance. And then at end of our conversation she added, “Well, I’ve found comfort in being the yeast factor. It is only me, but maybe only a little is enough to eventually influence them to give women more opportunities to lead.” Her comfort is one I hear often from those on the fringes. The idea is that a little of the right stuff can make a huge difference. However, Lucy’s words were more prophetic than she probably realized. 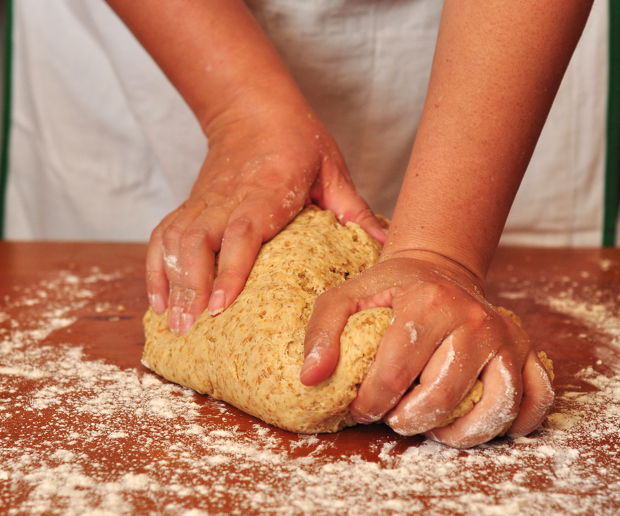 Jesus himself talked about yeast and its impact. He used yeast as a metaphor seven times in the New Testament. However, five of those times were to warn of the corrupting influence of the Pharisees, referring particularly to their teaching and hypocrisy. Even Paul used the term four times as a metaphor for evil, suggesting how a little sin can corrupt a whole believing community. Yet once in Matthew and once in Luke Jesus used the metaphor in a very different way. In a parable he used it to describe the kingdom of heaven (called “the kingdom of God” in Luke). In Matthew 13:33 and Luke 13:20-21 (NRSV) Jesus said, “The kingdom of heaven [God] is like yeast that a woman took and mixed in with three measures of flour until all of it was leavened.”

The most common metaphorical use of yeast, and the one used most often in the Bible, is to represent corruption and evil. Yeast is from the fungi family. Yeast takes sugar, digests it and converts it into alcohol and carbon dioxide. Bread rises and grapes become wine through a process of decay. When the children of Israel prepared for the original Passover, and all subsequent Passovers and holy days, yeast was removed from the house. Unleavened bread, bread made without yeast, was the bread served to special guests and on special sacred occasions. If a family ate yeast on the days set aside as holy, they were cut off from Israel (Ex. 12:15). Thus, the baking and eating of unleavened bread is associated with holiness and devotion to God.

Holiness mattered. God told the children of Israel to be a holy people because God was a holy God (Lev. 11:45 ; 19:2 ; 20:26 ; Num. 15:40). Holiness set the Israelites apart from all other nations. Among sociologists, this type of culture is known as a “purity culture.” The culture’s identity and social constructs are framed by the polar opposites of what is holy and sacred and what is unholy and profane. The Israelites had very clear notions about what was holy and what was not. And anything that fermented, such as yeast, was considered unholy and removed during special times.

Therefore, it shocked the crowd to hear Jesus use yeast as a metaphor for the kingdom of God. It did not seem possible to connect the two. The kingdom of God meant the activity of God: God’s movement, power, and presence. If yeast was removed from houses during holy days and its removal was part of memorializing the greatest redemptive act of their history, the Exodus, how could it have anything to do with the kingdom of God? They were mutually exclusive.

Even more disturbing, not only did Jesus use yeast in his parable, but he had a woman mixing the yeast into the flour. In Hebrew culture a representative of God’s kingdom would not be a woman but more likely a king or priest or prophet. Jesus broke religious conventions by using a woman to represent God, a God who was mixing yeast into flour. How could a woman, an unclean creature because of her monthly flow and childbirth, and a person with lesser status in the patriarchical social system, represent God? Again, not possible.

Jesus further complicated the picture by saying that the woman was taking the yeast and “hiding it in” the flour. He didn’t use the traditional Greek word for mixing or kneading yeast and flour, even though it is translated that way in many biblical translations. He used the Greek word which means “to hide in.” But God does not hide. God moves in the light. God made the light and separated it from the dark. The dark suggests evil and corruption. Therefore, why would yeast hidden in flour by a woman represent God and God’s activity? Jesus further increased his listeners’ discomfort by having her mix yeast into a great amount of flour, so that a lot of bread was made. Making three portions of leavened bread, unusable for sacred events or for serving honored guests, was illogical, especially when thinking about the kingdom of God.

Jesus with every detail was subverting his listeners’ understanding of God and God’s activity. A more correct parable would be “the kingdom of God is like a priest preparing a lamb for sacrifice” or “the kingdom of God is like a prophet proclaiming the way of the Lord.” Why would Jesus use an analogy which would offend or disturb his listeners? God is holy. God called the Hebrew people to be holy. So what does yeast, a woman, and hiding have anything to do with God?

This is the great truth: God is sovereign and holy, and therefore God will work in God’s way with whomever God chooses. And it will be good. The trap of holiness is the tendency to reduce piety and faithfulness to certain people and certain behaviors, so that God is no longer needed or consulted. Such thinking makes us believe we know what to do, who should do it, and how it needs to be done. The Israelites had fallen into that trap, so much so that many were unable to see the very Son of God before them. Jesus walked to and fro describing a God whose holiness and kingdom activity went beyond all conventional religious expectations.

So, what does it mean to be the yeast factor? What is Jesus saying to persons like Lucy and like you and me? It doesn’t mean accomplishing great things in our own power, as small as it might be, by trying to infiltrate the world for God. We can’t muscle our way to change even if we are being extra nice and competent. It means that quite possibly we are also full of notions about how God works, and we too can miss the very Son of God standing before us. Instead we are utterly and completely dependent on the Holy Spirit to lead us, to show us the kingdom way. Change begins when we actively listen in silence and with patience for the Holy Spirit to give us the mind of Christ. It means that prayer and discernment always come before activity.

Peter was praying on the rooftop where he received and accepted a completely alien vision about how he should behave towards the unclean. Because he recognized God’s voice and obeyed God’s leading, Gentiles heard the Gospel for the first time. As women, being the yeast factor means spending time in prayer and waiting until we are shaped and led by the very Spirit of God. Change happens in submission to the alien plans of God—God’s kingdom activity is the yeast hidden in the flour, fermenting an unseen, unexpected outcome. Then God can act in unexpected and confounding ways. Then the arm of God for justice and kingdom purposes might be exercised prophetically through us. Even then, many might not see or hear or understand. But it is not our business to be the yeast. It is our business to put ourselves in the hands of God, and trust him for the bread.

I grew up watching my neighbor Hoyt watch the world go by. After Hoyt had retired from the cotton mill, he sat on his porch — a lot. I’m not saying he did nothing, because he also had a large garden and tended football-field-length chicken houses...

Podcasts
By Carrie Bare and Ann Boyd
Carrie Bare: Remember God, the Hope of the World

Listen in on our conversation with spiritual director Carrie Bare where we discuss spiritual truths that can nourish us during these tumultuous times.